The rest is famous. 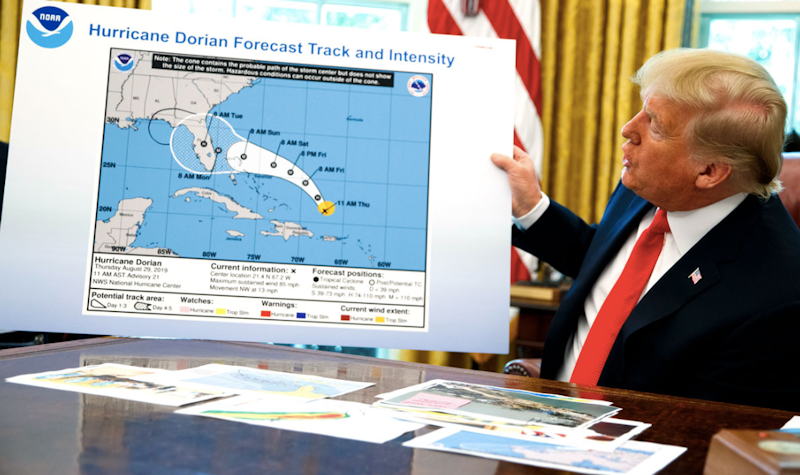 Donald Trump took that weather map he marked up, the one he Sharpied back during Hurricane Dorian. Trump had said the hurricane would probably hit Alabama, and he wanted the map to show that could happen when the map plainly didn’t; national hilarity was the result. This dumb map was one of the “high-profile documents,” as The Washington Post puts it, that Trump illegally hoisted when driven from the White House. The article says his messages with Kim Jong Un were some others, and that he handed the map and the messages back to the government while holding onto many boxes of documents that had received far less press. He did the surrender before the Justice Department got involved. I believe that Trump loves trophies, so I also believe that he has tremendous hopes for the stuff he kept, the boxes and boxes of non–high profile documents. He didn’t grab and keep the document boxes because of a simple “It’s mine” reflex (as people have argued). If that were it, he’d be clutching the shiny objects, and he sacrificed those.

Still, he did choose to take them in the first place, and at least one speaks to Trump’s particular mental setup. I mean the weather map, something that’s famous only because Trump used it to make an especially evident fool of himself. The North Korean correspondence makes him look foolish too, but it counts as history. Two nations talking at the highest level: you’re bound to have documents of note. But weather maps don’t acquire much note from being near a chief executive. This map bucked the odds because Trump scribbled on it in pursuit of a trivial scheme that the nation saw through and laughed at. The result wasn’t so much history as a strikingly pathetic media moment on a distended, because presidential, scale. Then,when Trump’s term was done, he hustled the map out of Washington like it was a prize; he had to have it. The map was famous, that’s all. Mike Tyson and Don King are famous, so there are black guys Trump talks to. That map’s famous, so it was as good as his letters with Kim.

His big thoughts rest with the document boxes: blackmail, nuclear secrets, clones. But the trophies cross his mind, especially now that they’re gone. He thinks about putting them on display, a national tour, a wing at Mar-a-Lago. Ropes everywhere, people hustled past, whatever a head. But mainly he’d have his things. He could walk past them at night; maybe a blonde would be with him, hand doing her work while he talked. So this superhero’s hall of trophies, of presidential trophies for a hero, would be something that Trump would very like to see, once matters managed to get organized. Until that moment, of course, boxes. Except that federal machinations came to intrude, and the rest is famous.

Distinctions. Mole is a term that’s been stretched, and Merriam-Webster’s says now it can kind of, sort of be used to mean any secret informant within an organization. Accordingly, somebody who was just recently turned could still count as a mole. But I don’t buy it. A mole is planted well in advance, builds cover, possibly warps their alleged side’s decision making to favor their real side’s interests. A rat can be recent because a rat just talks. Further, moles belong to espionage; rats belong to organized crime. All in all, if a Trump associate can’t figure out who talked to the FBI, the associate shouldn’t be wondering who’s the mole. But that’s what this one associate told the Post, as in: “There were two days of crazy talk in Trump world about who was the mole, who was the informant.” Huh.

“Oh mole; not rat, not rat, instead of mole.” These words, mole and rat, these distinctions underfoot, they flatten out and go crunch when the Trump battalion shoulders through the dense but vulnerable American wordscape. The big man himself overrides so many elements of tense, truth, and syntax that their rustling deaths produce a psychic unease, a disabling backdrop to his ungainly, looming hammerhead of a message. Sensitive onlookers are driven to word coinage and purple prose, broken by recurrent thoughts of the weather map and where do they keep it now, and does anyone ever look at it.