The history of Donald Trump's rally music, from "You Can't Always Get What You Want" to "Hold On, I'm Comin'." 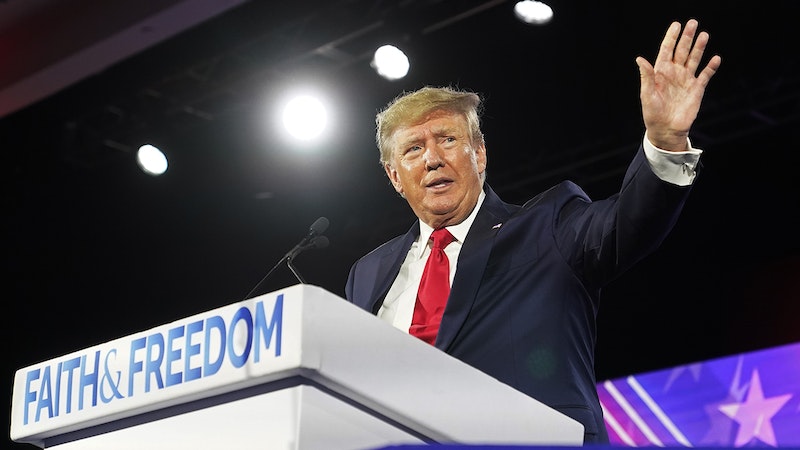 “What’s the deal with Trump using the Village People’s ‘YMCA’ as his rally-ending song?”

“Word is that Trump doesn’t know it’s gay, and Lindsey Graham chose it.”

I wish I came up with that. But it was Real Time host Bill Maher, and I’m paraphrasing.

Former President Trump has switched to Sam and Dave’s classic “Hold On, I’m Comin’” to close his ongoing rallies, and that’s better. While it was fun watching Trump attempt the boogaloo to a gay anthem, the spectacle set in motion a sense of cognitive dissonance. Anyway, I hope Trump is coming, and I’ll vote for him again. Politics aside, the history of his rally music is interesting from the standpoint of everything being about politics.

It’s a fair bet that Fleetwood Mac had no problem with Bill Clinton’s appropriation of 1977’s “Don’t Stop” on his 1992 run. I don’t know if the band was paid for the rights, but probably not, as presumably there was ideological alignment between these particular rock stars and the Clinton camp.

It was different when Trump began using the Rolling Stones standard, “You Can’t Always Get What You Want” as preface to his 2016 rallies. Again, there was an initial sense of dissonance. The opening lines “I saw her today at the reception, a glass of wine in her hand…” didn’t strike me as rock-ribbed political messaging. Conjured in my imagination was Melania Trump at a gathering of what unimaginative tabloid grunts called “swells.”

The chorus worked better, “You can’t always get what you want, but if you try some time, you just might get what you need.” Still, it seemed somehow less than Trumpian in that it evoked a sense of settling for something in advance. The fact is that in candidate Trump, the people attending those rallies were getting exactly what they wanted. Anyway, the Stones stepped in with a cease and desist, and the tune was dropped. The band’s lawyers didn’t even seek payment for the rights. The Stones couldn’t be purchased for any price, and wanted nothing to do with Donald Trump’s presidential aspirations. Referencing something to do with “venue licensing” rights, Trump had used the song to herald his arrival without ever paying a nickel.

When people asked what song I thought would resonate as the soundtrack for Trump’s run, I was ready. Twisted Sister’s “We’re Not Gonna Take It” was overdone. Same with Survivor’s “Eye of The Tiger,” assuming either of those bands would agree. Survivor’s heroic “Burning Heart” was perfect, not as well-known, and it has a killer hook.

Often, early in the campaign, I’d jokingly suggest Judas Priest’s “Some Heads Are Gonna Roll.” I couldn’t have known in early spring of 2016 how many heads actually would roll, on both sides of the aisle.

Now, even absent any formal announcement, Trump is back on the campaign trail. Everything has been made right. Trump enters his own private political arena to Lee Greenwood’s “God Bless The USA.” For the finale, The Village People’s musical salute to the Young Men’s Christian Association has been dropped in favor of a soulful hit that—according to those in the know—presages the future.

A final note: at a recent conservative meet-up, I told Bill Maher’s joke to a tableful of red-meat Republicans. Blank stares all around. They didn’t get it.