Censorship by a Thousand and One Cuts

Stabbing Rushdie is just one way the evil silence the offensive. 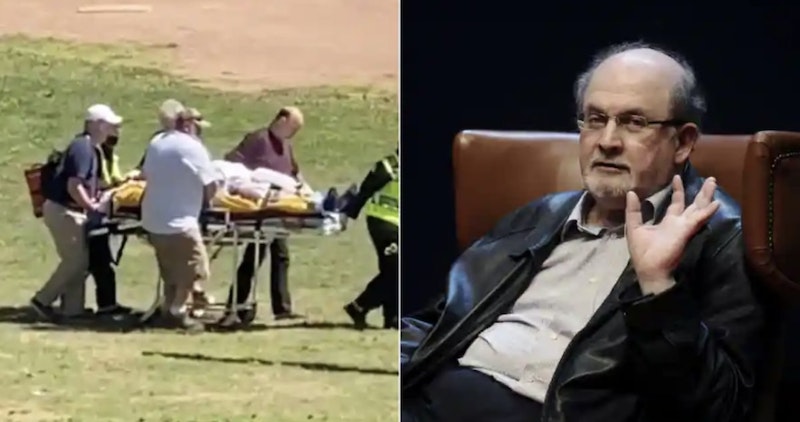 With a couple of acquaintances on the streets of Manhattan nearly 20 years ago—all of us sympathetic to skeptics and outspoken pundits—I saw Salman Rushdie and (though I didn’t know who she was at the time) Padma Lakshmi. After greeting Rushdie and, for lack of any better social initiation ideas, asking for his autograph, I took the trouble to ask him if I should keep quiet about seeing him in case he was trying to keep a low profile. He laughed, said no, and seemed very relaxed for a man with a fatwa on his head for writing the blasphemous Satanic Verses.

I hadn’t realized that he’d become prone to strolling confidently onstage with U2 and various other artists in high-profile venues, but when I later learned that, I was happy (for him and for free people everywhere) that he wasn’t letting the terrorists drive him into hiding.

About three years earlier, I’d attended a wedding at the Chautauqua Institution, and it too had a vibe far removed from fear and violence, the sort of relaxed collection of cottages, woods, and Greco-Roman-looking speaking venues you’d imagine Gene Roddenberry (or nowadays Seth MacFarlane, I suppose) had in mind when writing a script about a colony of humanists and tolerant thinkers setting up on Rigel 7.

Rushdie’s Midnight’s Children was plainly a superhero novel—a big influence on the comic book Umbrella Academy, among other things—so I don’t think he’d begrudge me a comparison between a sci-fi setting and the lovely place where he was stabbed and nearly killed during a speech last week.

In retrospect, maybe they should’ve had tighter security—at least a few more red-shirts on hand—but to criticize the place too much would be close to victim-blaming, and I’ve no desire to sound like one of those cowardly, overly p.c. writers from the PEN America group who objected when the organization gave a free speech award to Charlie Hebdo magazine, the objectors nearly hinting that the offensive magazine had had it coming when a dozen staffers were slaughtered by Muslim terrorists.

Even a libertarian or two, to my horror, cautioned after that early-2015 attack that we should take care not to sound too pro-Hebdo—which was about the time it became apparent there are new political fault lines appearing, dividing people over issues of free speech and etiquette more than economics, for good or ill.

My advice, transcending political factions: be offensive if it best serves your artistic or philosophical aims, and know that any idiots who physically attack you as a result were too stupid, inarticulate, irrational, and/or uncivilized to come up with a more productive response. No apologies for savages—and no kicking their victims when they’re down (this holds true from New York State woods to backward authoritarian cultures around the world and even in gym class).

The attack on Rushdie is just one incident of which there are 1000 prior examples, each exerting its little nudge in the direction of silence and fear and away from reasoned discourse. The past few weeks have also seen a Muslim radical arrested in Brooklyn carrying a machine gun outside another author’s home and an Iranian military official charged, though he remains at large overseas, with trying to arrange the killing of John Bolton.

As for Rushdie’s attacker, it sounds as though he’ll be charged only with attempted murder in the second degree, since there is purportedly no evidence of premeditation—and thus officially no need yet to mention Iran or analyze the likelihood of the attacker being consciously a jihadist or part of a larger network. But I’m no lawyer, and whatever legally sound approach makes it easiest to put the guy away quickly is fine by me.

Not that the larger war will soon end between authoritarians of all stripes and those they want to shut up. Already, police are investigating a death threat directed at J.K. Rowling for her expression of support for Rushdie, and she could be forgiven for losing track of whether her latest death threats have come from religious fanatics (Muslim or Christian) or from the trans activists who hate her with a passion (people who consider themselves “liberals” like Rowling herself or postmodern leftists of the sort who think the categories male and female don’t exist yet also think Mohammed was the first true feminist).

And lest you relax and tell yourself that despite the proximity of Chautauqua this somehow falls into the realm of distant foreign affairs, keep in mind, just to note a few other examples of speech suppression, that Biden pressured Twitter for months to axe the account of COVID skeptic Alex Berenson, that Bari Weiss claims The New York Times would only publish an op-ed by (allegiances-scrambling black conservative)  Sen. Tim Scott if Democratic Sen. Chuck Schumer approved, and (as Reason magazine noted) Facebook and Instagram flagged posts as “misinformation” merely for rejecting the Biden administration’s self-serving, novel redefinition of the standard economics term “recession.”

Words aren’t a form of violence, but censorship, by contrast, comes just a bit more dangerously close to resembling outright attacks on civilization.