Kicking People When They're Down

Have a little sympathy for the victims of Saturday's absent rapture. 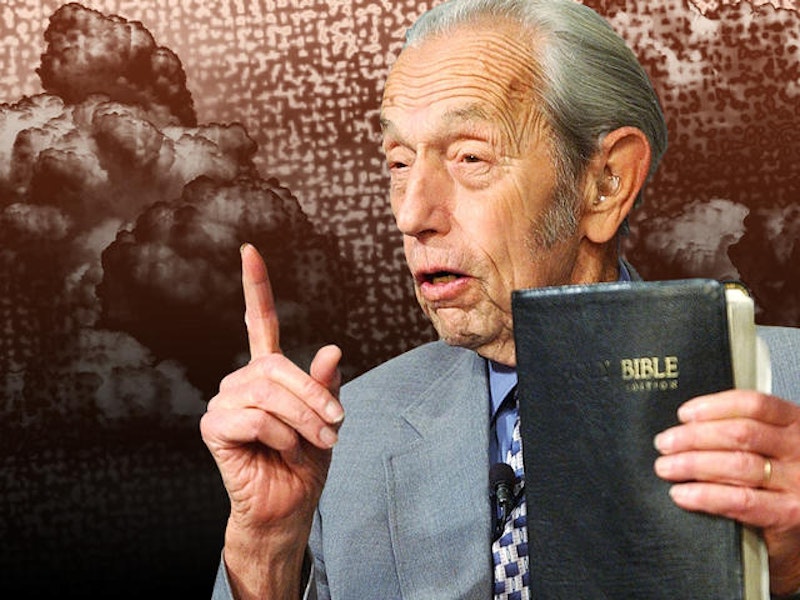 As you may have noticed, the world did not end on Saturday. While this is decidedly good news, for the people taken in by Harold Camping's bogus prediction, the tribulations are just beginning. Followers like Robert Fitzpatrick, a retiree who spent his entire life savings of $140,000 trying to warn people to repent, must now face the world without a penny to their names and looking like fools. Camping, meanwhile, is AWOL, presumably with some of the millions of dollars [http://www.examiner.com/missing-persons-in-national/failed-rapture-prediction-leader-still-missing-followers-dejected-ridiculed] he's raised in the past couple of years scaring people with tales of the apocalypse.

There is a large amount of ridicule directed at people whose faith in Camping's convoluted math and mysticism caused them to risk everything. While it's easy to mock someone for blindly following the words of a con man, I don't see that their belief in a set date for the rapture is that much different from what a large number of Americans believe. According to the Pew Research Center, 41 percent of Americans believe Jesus will “definitely” or “probably” return for the faithful before 2050. Yet instead of compassion and understanding, the response from both Christians and the non-religious has been almost exclusively gleeful mockery. Most Christians are saying they deserve to be punished for following a false prophet, while most atheists are arguing that they don't deserve to be rescued from the consequences of their gullibility.

There have been some exceptions. On the American Atheists website, a message was posted urging people taken in not to hurt themselves and to learn from the experience.

You may feel stupid, and that’s because you’ve done a stupid thing—you trusted your preacher blindly. You believed without thinking.But that doesn’t mean you’re stupid. Smart people sometimes do stupid things. A truly stupid person would NOT learn from this mistake. A truly stupid person would keep following Camping as he ‘recalculates’, or says “god has forgiven us because of the prayers we sent up” or some other lame excuse for his rapture not happening.

Some churches are also offering counseling and messages of support for Camping's victims. Pastor Jacob Denys of Calvary Baptist Church in Milpitas, California, released a statement, saying:
We realize our offer of assistance may not be well-received right now but we hope on May 22nd they will see it is an offer made in Christian love. We know that you will be hurting when you realize that you have been deceived, and we will be here for you.

Whether you are religious or not, surely the appropriate response to human suffering, even self-inflicted suffering, should be sympathy like this, not smug superiority and delight in the troubles of others. If Christians want to claim they follow a religion of love and compassion, and if atheists want to claim that the philosophy of humanism values human life, then they ought to refrain from kicking people when they're down.