"Our last hope is to generate a democratic awakening among our fellow citizens." —Cornel West 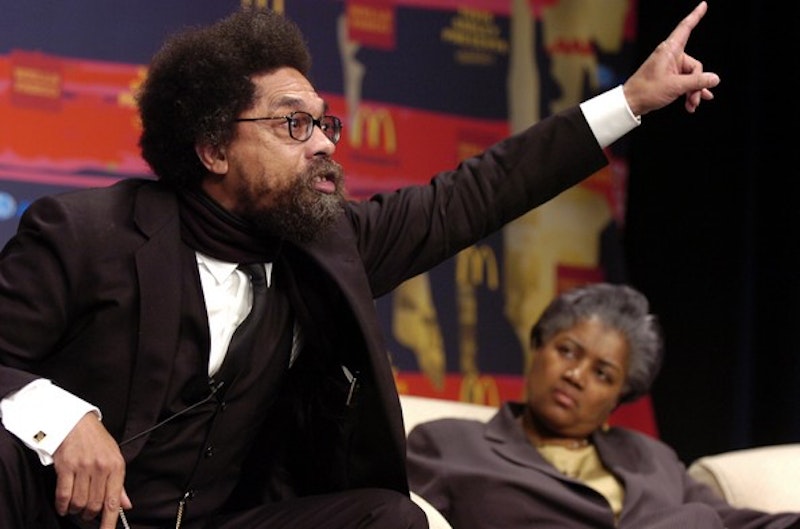 After re-reading Chris Hedges' recent interview with Cornel West, I still don't really understand the outrage. It was, of course, West's bluntest criticism of Obama to date, an almost total disavow of support, with West admitting he was "completely wrong" about Obama's progressive politics; and yet, he's made such criticisms for more than a year now, the same criticisms voiced by everyone from George Soros to Jon Stewart.

We are squeezing out all of the democratic juices we have. The escalation of the class war against the poor and the working class is intense. More and more working people are beaten down. They are world-weary. They are into self-medication. They are turning on each other. They are scapegoating the most vulnerable rather than confronting the most powerful. It is a profoundly human response to panic and catastrophe. I thought Barack Obama could have provided some way out. But he lacks backbone.

That President Obama has been far more moderate than Candidate Obama isn't really up for debate—you can check out Politifact.com's Obameter for the full score—and Old Leftists have long questioned Obama's progressive commitment (an October 2008 interview I did with former Sen. Mike Gravel reads like prophecy at this point), so I have to think that West's Cardinal Sin here was framing his argument around race just as some pundits have begun questioning whether Obama can rally black voters in 2012 the way he did in 2008.

As DeWayne Wickham, columnist for USA Today, put it during Monday's Midday With Dan Rodricks:

...I think what is going to happen in 2012 if Obama is not careful, is that the enthusiasm gap will be a greater threat to his re-election than any Republican nominee... He will get, I predict, easily, that he'll get 95% or more of those blacks who go out to the polls. But if the enthusiasm gap waters down turnout, Ohio's in trouble, Pennsylvania's in trouble, Florida's in trouble, North Carolina and Virginia which he won, miraculously, in 2008, will be off the table. And if those things happen, he's gonna be a tough sell for a second term.
For a prominent African American intellectual and enthusiastic pre-election Obama supporter like Cornel West to turn on Obama now, to say that Obama has "a certain fear of free black men... a certain rootlessness, a dereacination," of course he has to be shut down by Obama supporters like Melissa Harris-Perry, no matter what sort of genuine debate on race West's comments could stir up.