Less than one month left, folks! 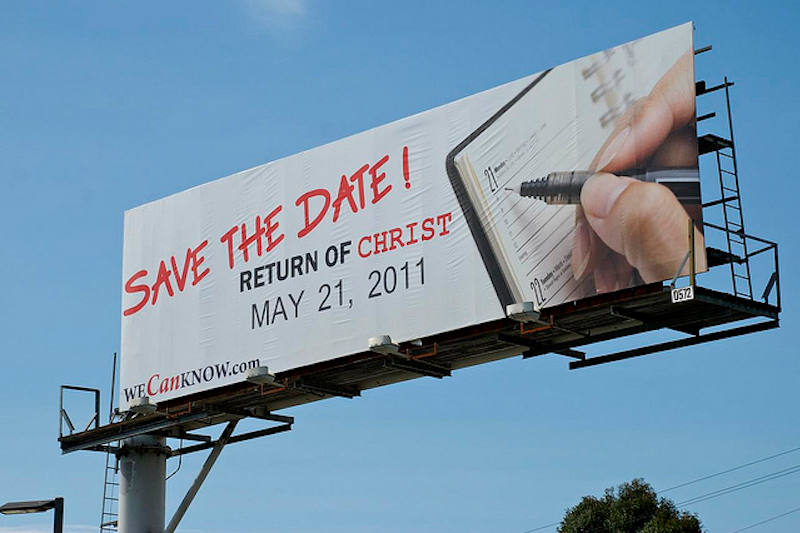 In case some kind soul hasn't informed you yet, the Rapture is fast approaching. According to Family Radio's Harold Camping, it's scheduled for May 21, 2011, as anyone with a Bible and a head for figures can check for themselves. Don't believe me, he says, it was all written down ages ago and “it's absolutely true, because the Bible is always absolutely true.” Never mind that the same Harold Camping originally predicted the Rapture would happen on September 6, 1994.

In honor of the big day, I thought we could take a look at the various Rapture services available to those who are shortly going to be whisked away to party with the angels.

You may have already heard about Earth-Bound Pets, the original post-Rapture pet care company, which promises clients a confirmed atheist to fetch their beloved pet after Judgment Day occurs. For a onetime fee of $135 and $20 for each additional pet, you can be sure that your animal companion will spend the Great Tribulation with a caring if godless owner. Now, if you’re into exotic pets, you may be out of luck, since they only cover your standard dogs, cats, birds, rabbits, and small caged mammals, plus horses, camels, llamas and donkeys in New Hampshire, Vermont, Idaho and Montana.

After the welfare of their pets, people tend to be concerned about the friends and family who haven't been pious enough to be caught up. Who wouldn't want to send them one last message pointing out their failings and urging them to turn to God? Post-Rapture Post has got you covered there. Another atheist-run company, they promise to deliver your last missive within two to six weeks of the Rapture for the very reasonable price of five bucks. If you really want to get your message across in style, they also offer the option of having your message hand-scribed on medieval style parchment sheets and then rolled and wrapped with an Italian ribbon, to be delivered within a day of the Rapture “depending on the transportation options available to those rejected from the Kingdom of God.”

Some of you may not trust those sneaky atheists to actually deliver once the shit hits the fan. After all, they freely admit to using the money from their Rapture businesses to fund their sinful lifestyles. Technology and some forward-thinking Christians have come up with an answer to that dilemma as well. At You've Been Left Behind, you can store up to 250Mb of data to be delivered by email to as many as 62 addresses in the event of the second coming. If at least three of their team members do not log into the system for six days, the system assumes the Rapture has occurred and triggers the delivery.

If you don't have any particular message to pass on, but just want to let people know that you've been taken up to heaven and not snatched by an axe murderer, you can register for the Rapture Book [http://rapturecoming.com/services.php]. The makers put it best when they described it as, “a compilation of names of persons who feel their salvation is assured and who have chosen to place their names here in this book to be searched by those who were left behind.”

But what if you’re not sure you will be among those whisked off to paradise? How embarrassing would it be to face your friends and neighbors on the morning after? Assuming you are willing to go into hiding, Rapture Fakers can promise you’ll never have to take that walk of shame. Using gold dust to signify heavenly beams of light and customized yard signs, they'll make sure that everyone on your street thinks you lived righteously enough to be called to paradise. For a little extra, they’ll even include chariot tracks burned into your lawn “Elijah-style” and a classically trained actor, bearing a striking resemblance to Jesus, who will come to your door and personally fetch you home.

With great services like these available, anyone can face the Rapture with peace of mind.