A final moment of solidarity for the Trump-fearing Democrats. 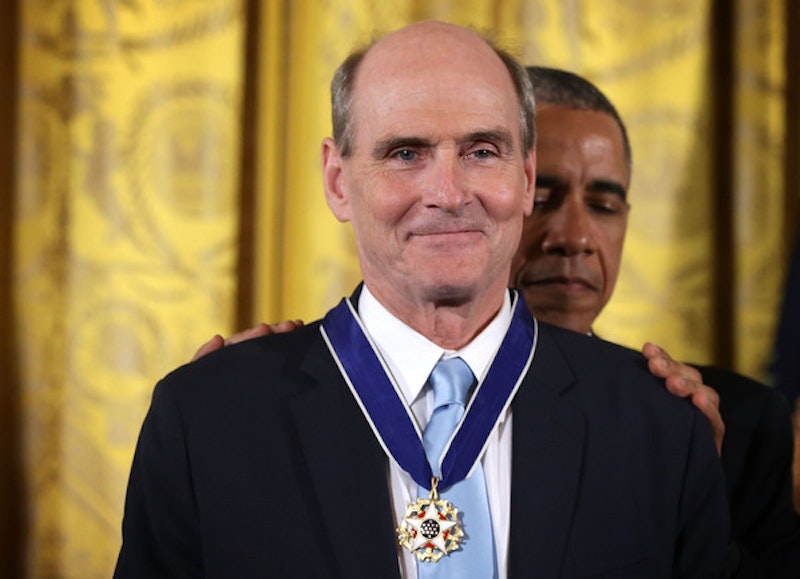 Watching Barack Obama sing along to a medley of James Taylor songs must’ve filled many Republicans—particularly the Trump-supporting arrivistes—with pure loathing. The President was in a singing mood during last week’s delayed television broadcast (the actual event was held on December 5) of the Kennedy Center’s tribute to James Taylor, The Eagles, Mavis Staples, Al Pacino, and Martha Argerich. Compounding their disgust would’ve been the fact that it wasn't one of our most accomplished actors or an iconic musician who received the loudest standing ovation at the gala. It was the “celebrity-in-chief” himself who took that honor.

The evening was emotional. Singer Garth Brooks teared up as he performed Taylor's “Shower the People.” Showering the people with “love,” that is, and showing them “the way that you feel,” squishy sentiments that can make many Republicans squirm in their seats. Heaven forbid, this sentimental mush was making a country superstar cry? It was bad enough at last year's event when Aretha Franklin extracted a tender, elegant tear from Obama’s left eye just a few seconds into her performance of her old hit, “(You Make Me Feel Like) A Natural Woman,” but now this? Most of the solid right-wing viewers who’d bothered to turn on the show probably bailed in disgust when Brooks broke down, but the hate-watchers who hung in there were soon rewarded for their persistence by the onstage appearance of their favorite Hollywood liberal bête noir, Sean Penn.

From the Democratic side of the aisle, the festive evening offered two contrasting views of the outgoing President. To the hardcore Obama fans—those devout admirers whose adoration for their “passionate, intelligent, and dignified” President (event host Stephen Colbert’s words) has remained intact throughout his two terms in office—was a fitting, warm coda to a successful two-term presidency. They’ve noticed no broken promises in his “hope and change” platform, perhaps too relieved that he delivered them from the horrors of the George W. Bush era to look much below the polished surface in his waning days in office. With the crude and blustering Donald Trump—the anti-Obama, the anti-Christ—soon occupying the Oval Office, they're even less inclined towards a realistic post-mortem of Obama’s job performance.

To these Obama fans, the Kennedy Center fête marked one final feel-good opportunity for progressive-leaning Americans to celebrate their cultural icons along with their beloved President, who appeared to be in his element, soaking it all up one last time. To those on the left less blinded by Obama’s seductive persona, this cultural event/warm send-off to an outgoing President was emblematic of how his tenure in office had evolved. The President said that it was one of the perks of the office he'd miss the most, but given the devastation of the Democratic Party he'd presided over for the last eight years—the lost governorships, the dearth of up-and-coming leadership, the loss of both the Senate and the House—many must wonder what “could’ve been” had he focused less on such perks and more on less glamorous grunt work. Obama’s seeming need for ubiquity—all those TV appearances—ultimately felt like compensation for not delivering the goods, as if a good performance could distract from the less impressive reality.

There's little hope left for Democrats now, on the cusp of the Trump era, and the change never really materialized. The President fell well short of his stated goal of altering the way Washington works. He didn't make his administration the most transparent one in history. And as his time in office went on, he was increasingly like part of the establishment he’d railed against, culminating in his supporting the most establishment Democratic Party candidate imaginable—Hillary Clinton—which resulted in the most devastating loss in the Party’s history.

It's hard to imagine Trump attending one of these Kennedy Center annual tributes to artists, which are now in their 39th year. It's hard to imagine that Trump even likes music or any sort of art, and even harder to imagine him singing along to any songs besides “The Star Spangled Banner” and “God Bless America.” These events aren't great from a musical perspective, unless you happen to enjoy Darius Rucker butchering James Taylor’s best song, “Sweet Baby James,” but it’s reassuring in a way to see the President visibly supporting the arts. The Obamas turned the White House into a virtual salon, hosting an array of influential writers, musicians, dancers, and other artists. The Trump White House will have a different feel. Artists are generally repulsed by him. Welcome to the country club White House, where Trump “champagne” will be poured freely, and the Trump brand is the featured guest.