Kamala Harris and Mike Pence are More Similar Than Different

The debate wasn’t about race and gender. 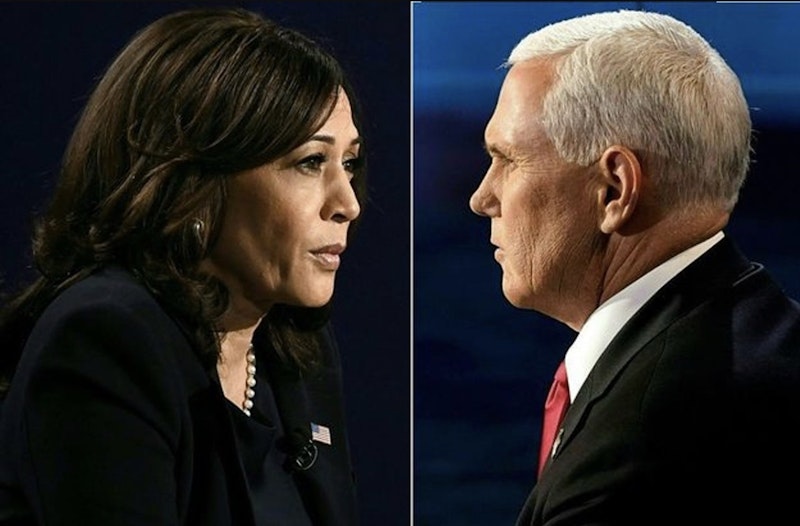 Various commentators were braced for a festival of sexism, and came to their televisions last night with the intention to pick apart the "gender dynamic." I have the impression that they didn't find what they were looking for.

When CNN came back to their studio people (Gloria Borger, Dana Bash, and Abby Phillip, distanced from each other at a vast desk) they concluded unanimously that Pence had "bulldozed" both Harris and moderator Susan Page, and it was terribly unfair because Pence got a lot more time by this technique. And also, they asserted, he felt he could do this because the other two people on the stage were women. When CNN finally did the calculations, however, they found that the candidates got equal time, more or less. Pence raised his eyebrows and shook his head a lot, they said. But Harris was beaming all sorts of derisive looks right back, and what the hell do you expect?

"It was hardly a surprise that Pence reeked of white male privilege," said David Smith in the Guardian. "It was less anticipated that the target was the moderator, Susan Page of USA Today, as much as Harris. Showing no respect for her questions, rules or timekeeping, he just kept talking and often called her 'Susan.'" I'm not sure what his reeking consisted in, besides standing there at attention, being a white guy. And I don't think “Susan” is much a slur, really; not like “Karen,” for example.

Pence repeatedly interrupted Harris, they said. He did, here and there, which isn’t entirely inappropriate in a debate that’s supposedly inviting free exchanges after two minutes of canned speech. But he did so politely, and Harris had plenty of opportunity to speak.

Harris, it’s often said, and all ambitious and accomplished women, face various traps and insoluble dilemmas. Harris, or Hillary Clinton, for example, has to be feminine enough to not appear gender-inappropriate, and also macho enough to win elections and control staffs and confront dictators. An eminent woman in politics is supposed to be both self-effacing and assertive. A female presidential candidate must be ambitious, but not too ambitious. She’s expected to take up power in a female way—the leader as nurturer, maybe—but she'll also have to be commander-in-chief of the Marine Corps.

Overall, ambitious and accomplished women are met with less surprise and confusion every day, partly because they’reexplicitly reflecting on and addressing these issues; Amy Klobuchar got a real double-edged response along these lines, and was also interestingly reflective about it. But debating against a Harris as a Pence—a kind of standard-issue old-school politician, a white football-coach-looking dude standing stiffly in a suit—also raises certain difficulties.

Let's say that Pence, with Harris, took the same approach Trump did with Biden, constant hectoring, filled with insults. I felt a bit sorry for Biden in that situation. If it were Pence doing that to Harris, though, I would’ve felt that it was really monstrous (the gender binary is still installed in my head). Coming from Pence toward Harris, even the sort of anger and hostility that an average politician displays in a debate might’ve appeared abusive. Pence's mild-mannered and occasional interruptions—perfectly typical and appropriate in a political debate—were still greeted as sexist.

But if Pence had been unfailingly deferential, never raised an eyebrow or inserted a denial (as Gloria Borger appears to demand), that would’ve been condescending. He wouldn’t have approached her as an equal with whom he was arguing. He'd approach her as a woman who needs his protection or who can’tfend for herself. That's a pretty complicated situation too: the complement of the dilemmas a woman faces in debating a man. I'm no fan of Mike Pence's persona or his politics, but I think he handled that situation as about as well as one could.

Maybe Harris did too. I might, as a white guy about Pence's age, not be the best judge, but perhaps she threaded the needle: ambitious and assertive without being butch (not that there's anything wrong with butch, but we're talking on the level of the pressures and opportunities offered by gender norms within mainstream politics). And I feel that her racial identity didn’t affect the proceedings much, which is a bit surprising. Somehow, everyone took the opportunity to ignore it.

And there hasn’t, the day after, been the outpouring of attacks on Pence's performance as racist and sexist that I expected. The race/gender theme cooled quickly this morning after it flared last night; it just wasn't the most salient element. (Pence's race problem took the form of his flat denial that the USA is systemically racist and that the criminal justice system is riddled with implicit bias, not any particular untoward remark about Harris' ethnicity or any sort of explicit sign that it was affecting his interaction with her.)

Beyond race and gender, I thought the debate as a whole was astand-off. The candidates came off, despite the yin-yang or thesis/antithesis look onstage, as very similar sorts of people. They repeatedly refused to answer direct questions posed to them, preferring to launch into rehearsed set pieces on unrelated topics. Sometimes they refused to answer the same question, as when, early on, Page asked them whether they'd talked to their principals about "safeguards or procedures when it comes to the issue of presidential disability." Pence launched into a schtick about vaccines. Amazingly, Harris took the occasion to replayher two-minute canned bio. I take it that the actual answer is "No."

The status they share, successful professional American politicians, swamped the racial and gender differences. The policy differences remain vast; Harris and Pence were fairly clear, if very poll-driven about them. The debate could’ve been worse.