Cultural Gatekeepers Are Letting Us Down

Four major museums have canceled their Philip Guston exhibitions for the wrong reason. 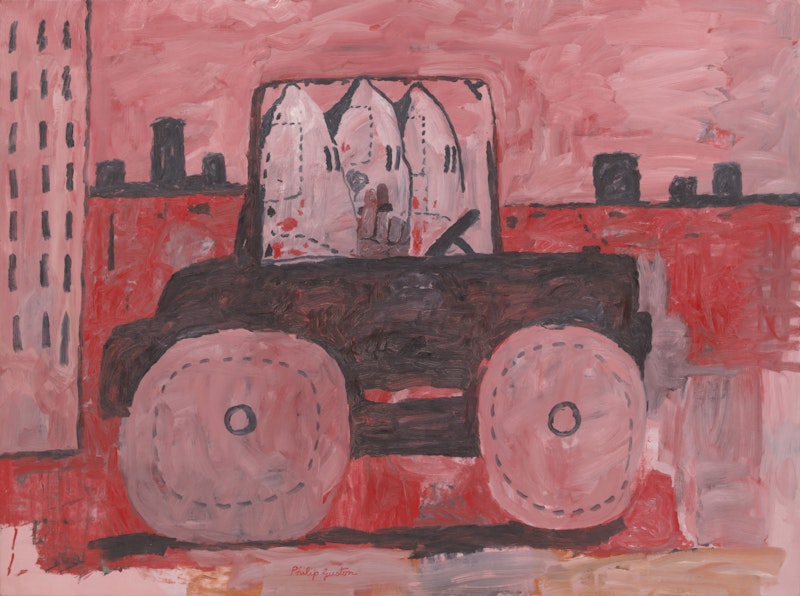 The late Philip Guston is one of the most important painters of the past 100 years. He made his reputation with abstract art, but then moved into figurative painting and hooded figures resembling Ku Klux Klan members became a repeating motif. The artist was not celebrating white supremacy, however. His Jewish family had fled Odessa, Ukraine to escape anti-Semitism in the early-1900s, relocating to Canada, so the artist had nothing but contempt for all such hate groups. He said that he painted the cartoon-inspired hooded figures as an exploration of evil. But the nationwide street protests in the aftermath of the George Floyd killing, many of them marked by violence, have created an atmosphere of trepidation about possibly causing offense, so people are cautious; perhaps "cowardly" is more accurate. Four museums—the National Gallery of Art in Washington, the Museum of Fine Arts in Boston, the Museum of Fine Arts in Houston, and London’s Tate Modern—recently announced that they were postponing planned Guston exhibits until 2024, despite the fact that two prominent black artists contributed essays to the exhibit's catalog.

Here are some weasel words from a joint statement issued by those four institutions: “We are postponing the exhibition until a time at which we think that the powerful message of social and racial justice that is at the center of Philip Guston’s work can be more clearly interpreted." Note that the museums elided the fact that the Klan images were the point of contention, which doesn't inspire confidence in their judgment.

It's hard to sound more paternalistic than when you're telling the public that works of art can't be "clearly interpreted" right at the moment, but in four years things will be different. That's a bizarre, anti-art thing to say. We're no longer able to view works of art delivering powerful messages of social and racial justice because they might possibly offend a few people who misunderstand the artist's intent out of ignorance? I say "no longer" because Guston isn't a fringe character in the art world whose motivations haven't yet been fully explored and explained. He's one of the "good guys," not an artist who produces great work but has toxic views like, to cite a well-known example, the anti-Semitic fascism-loving poet, Ezra Pound. The directors of the museums know this, but they lack the courage of their convictions, which is a dereliction of duty.

Cultural gatekeepers like the four museums in question have a new set of overseers, at least in their fearful minds. The last thing they want is clueless but motivated activists whipping up a social media frenzy and then showing up as an angry mob outside their buildings. Those museums announced that "the racial justice movement that started in the U.S." and the "challenges of a global health crisis" have led them to pause. Someone needs to explain to me what the pandemic has to do with this issue, because I'm not seeing the connection.

It's not like the paintings in question are similar to the Confederate monuments that have long towered over us here in Richmond, Virginia, delivering to many a regular, inescapable reminder that the city's leaders during the Jim Crow era wanted to make sure that the glory of Dixie didn't die at Appomattox. Sensitive people are free not to view a Guston exhibit if they object to his images. And if the museums are afraid that a work of art might be misinterpreted, all they have to do is put a message alongside it to provide the proper context.

Look to the Left to tell us why the museums have done the right thing. Vulture, a website covering culture, wanted to defend the museums while trying to avoid the appearance that it condoned  the censorship of art, so it ran a piece by Jerry Saltz headlined, "4 Museums Decided This Work Shouldn’t Be Shown. They’re Both Right and Wrong." Both right and wrong? Once again, more weasel words on this topic.

Saltz actually wrote a defense of the museums while paying lip service to a few counter-arguments to show that he isn't a philistine. He offers this apologia for not showing the paintings: "We could see white Proud Boys and Trumpists posing in front of the Gustons, giving white-power signs as nearby crowds with firsthand memories of the Klan look on." Seriously? It's difficult to believe that anyone would believe that this is even a possibility. So now our art must be curated so that no Proud Boy will ever be given the opportunity to exploit a painting? By that timorous rationale, the Virginia Holocaust Museum in Richmond should shut down so a Proud Boy can't pose with a swastika in front of a photo of Auschwitz and then put it on Twitter with a "thumbs up" emoji. Also, the Proud Boys leader, Enrique Tarrio, has a black parent, and he's explicitly denounced white supremacy. In fact, the Proud Boys, which has other black members, espouse "Western chauvinism," a philosophy that's distinct from white supremacy.

While I deplore unnecessary police violence against minorities, I'm less sanguine than other like-minded individuals about the street protests that went on for months after George Floyd's death. When "protesters" smashed every window in the coffee shop I frequent, it drove home my observation that the protests were often turning into mobs that itched for some violence. Then I saw some videos of mobs confronting people in public places and demanding that they give affirmations of their allegiance to their cause. Some of them are authoritarians drunk on their own righteousness. They seek to impose a soft form of authoritarianism on society by forcing people to conform to their dictates. These mobs are what the museums fear, and it's not just the museums; the fear is everywhere.

One of art's greatest powers is the ability to disturb, provoking thought about important topics. Young artists are going to have to neuter themselves by making their art acceptable by the standards that four major museums are now adhering to. Those museums should give more thought to what their real responsibility is instead of giving us doublespeak to cover their asses.