Between now and Election Day, there will be nothing to talk about except vicarious drape measuring and Trump's oxygen levels. 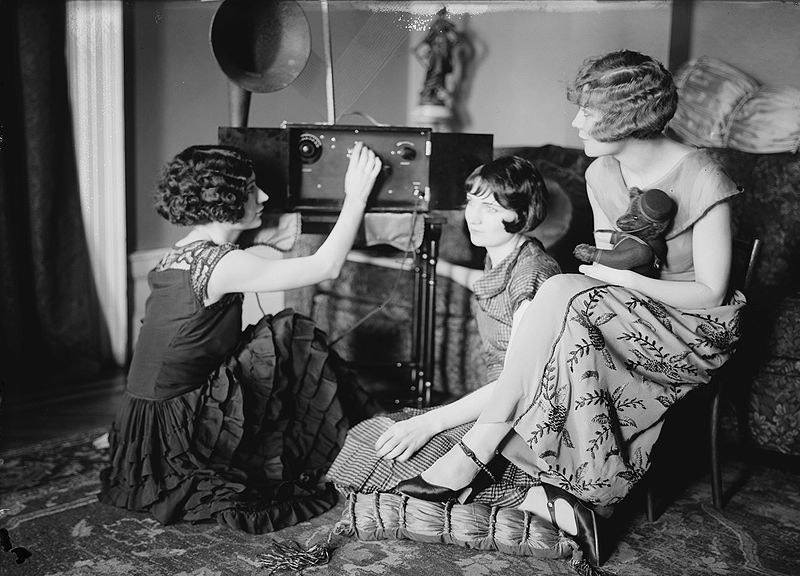 Pictured: Frustrated radio listeners in the 1920s, unaware of the glories and treasures they are missing from NPR.

The presidential election is in 500 hours, and the same pundits and media cheerleaders who, just last week, were terrified of a potential mass uprising of white nationalists, gun nuts, and QAnon supporters are now convinced that “people are just tired,” and that they want Donald Trump out at all costs. The President’s sick day rally on Saturday at the White House drew little notice and fewer people: although the crowd is being reported at around 300, one must assume any reporter covering this would shrink the numbers. Still, 600 people less than a month before the election is pathetic. Last week I argued that Trump didn’t have COVID-19 and that he was faking it in a grand election strategy. Now I’m convinced not only that he does have the virus, but that he won’t make it to Election Day. A friend of mine sent me the timeline of Herman Cain’s illness: diagnosed in late June, dealt with the disease reasonably well for weeks, got better, then died suddenly a month after being diagnosed.

NPR has already moved on to its next era, an intensification and narrowing of their content into ever more precious and untouchable subjects and people. If they’re talking about fossils, you better believe they’re talking about “law enforcement” and “bodies and spaces.” I caught the tail of a story—no idea what show—last Friday, where someone was brought on to explain the findings of a recent skeleton discovery. The person, almost certainly a woman who died about 5,000 years ago and likely lived as a slave. The skull was missing the nose—the contributor went on to say something to the effect of, “so this shows us that the tactics of law enforcement and the way that women’s bodies are regarded hasn’t really changed all that much.” The host then said he was happy that “we finally can know the story of this woman and her life.” Yes, what a life: to be a slave in 5100 B.C. with no nose!

Another story from the same hour really pissed me off: a couple of people were talking about social media, and the growing urgency to “learn how to adapt to these new technologies.” Why do we have to adapt to social media? Why can’t it adapt to us by ceasing to exist? NPR is poison, and I’ll write more about this another time, after I can fortify myself enough to actually listen and critique a substantial portion of the station, but I can’t stand them because they constantly handmaiden right-wing views and talking points into soft liberal discourse. They’re as ruinous and ideological as Fox News or MSNBC, but their politicking goes largely unnoticed in comparison. NPR, if Joe Biden wins, will continue to air even more insulting and ridiculous stories, like how we got to know an ancient turtle’s “truth” after his shell was discovered amongst Sumerian ruins.

If next month’s elections do lead to a “blue wave,” sweeping not only Biden into the presidency but giving control of the Senate back to the Democrats, nearly every journalist and reporter currently employed at major media organizations in the United States will be fired. Those shouting loudest for Trump’s removal from office by any means—whether it’s the Hatch Act, the 25th Amendment, an impeachment trial, leaked recordings, or even more juicy drops we haven’t yet been privileged to sample—will be the first to go when the presidency switches hands. Under Biden, or Kamala Harris, or any of the other Democrats within striking distance of the nomination this year, ratings will plummet and those much vaunted digital subscription numbers will plummet. That would’ve been true even if Bernie Sanders managed to win, although I imagine anyone who beat Hillary Clinton in 2016 would’ve been saddled with her baggage and the baggage of her supporters, just as Trump has.

Clinton has loomed over Trump’s entire presidency so far, to the point where her family, along with the Obamas and the DNC, essentially pressured everyone but Sanders to drop out so that Biden could snag the nomination and the party could go into hibernation over the summer as the novel coronavirus ravaged the land. Not that the party in charge did much to stop it: without a federal mask order, and with the inane notion of “state’s rights” in the context of a new highly contagious and serious disease, the United States will likely ping-pong between soft opens and hard lockdowns for the next decade. This is only a consequence of government mismanagement at nearly every turn, from the initial “white lie” about masks not being necessary to the CDC’s maddening indecision regarding the way the disease spreads. It’s airborne, no it’s not airborne; it’s “touch,” or not—“you know, the touch,” as our President says.

Without our own Mad King of Bavaria tweeting from the White House during speed freak hours, how will people adjust to the news cycle? I’ll spell it out: they’ll stop watching, they’ll stop reading, and they’ll stop listening. Even with social media already as our first-step into AI and augmented reality, in the absence of dopamine or duck legs, people are going to log off. They’re going to go back to their lives, whatever they are; for the people who complain the most about Trump and his garish offenses to bourgeois and, often, basic humanistic sensibilities—well, they will be left without a paddle. And the world around them will still be disappointing: there’s no great culture here. Four years of Trump has produced no lasting political art, it’s made film and television worse almost across the board, and the avatars of social justice and youth revenge—namely, pop musicians—have given up the mantle. They’re fine with their 360 deals, they’re fine with the anachronistic notion of “selling out,” and they really don’t care about politics.

They find Trump disgusting because he is, but have no opinion about George W. Bush, Dick Cheney, Donald Rumsfeld or Henry Kissinger beyond the basics, or worse, liberal pabulum and lies about how America under those regimes was “so much better” because people could “agree to disagree.” This is a fantasy, and we have only Trump to thank for that. If nothing else (and I am struggling to think of anything else), Trump didn’t just make the subtext of American life into text, he exploded it into a four-dimensional interactive narrative, a reality-bending acid trip of the airwaves that made everyone collectively hallucinate and go mad like rabid dogs for the better part of a decade. If he wins another term (and survives COVID-19 with more than one lung intact), this aspect of his presidency will be forgotten in the wake of atrocities even worse than his handling of the pandemic and his idiotic refusal to wear a mask, even after he was diagnosed positive.

And we all wait, some more gleefully than others, on the esplanades waiting to see how the media will react to Trump losing the election and them, in short order, losing their jobs. I told you, we’re in the Coliseum now!