Heroes for a (Contractually) Messy World

Forged not just in battle but also in bureaucracy. 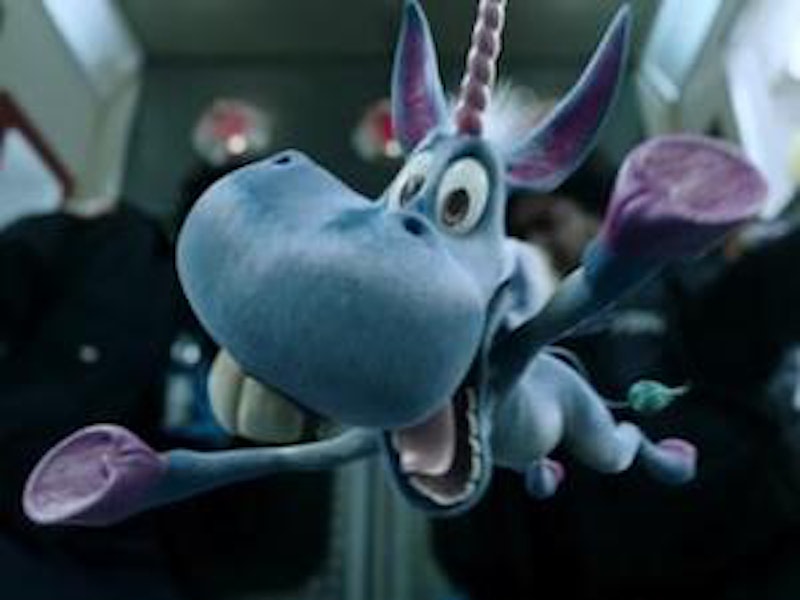 I’m enjoying this golden age of abundant sci-fi TV and superhero movies, but whereas we used to think of these characters as born of basic facets of the id—fear of the dark, etc.—now you can clearly see the impact on them of complex, modern forces such as contract disputes.

Last week saw the (limited) release of the film The Man Who Killed Hitler and Then the Bigfoot, which is about exactly what it sounds like, with Sam Elliott as the man, up against two nemeses who loom so mythically large in the popular imagination you may lose track of which one (?) is real (?). It’s so much easier to make a movie about un-owned figures like Hitler and Bigfoot, though, than to wrestle with living corporate trademarks.

Next month brings the movie Captain Marvel, which may look like total escapism but will likely at least flirt with two common claims from UFO lore: that one race of alien visitors is made up of athletic blonde “Nordics” and that another is sinister shapeshifting “reptilians.” The only things shiftier than the reptilian Skrulls, though, are the intellectual property rights to the name “Captain Marvel.” This Marvel Comics character, played by Brie Larson, is not to be confused with the DC Comics hero in theaters one month later, Shazam, formerly known as Captain Marvel. He had the name first.

The very short version of the legal saga is that back when superheroes were rare in the middle of the 20th century, DC Comics successfully sued the publishers of Shazam because he was purportedly too similar to Superman. DC gained the rights to Shazam in the resulting legal battle, then made little use of the character for decades, a fallow period that arguably gave both Marvel Comics and a British publisher (among others) the right to introduce new versions of the character (or at least variations on the name), resulting (eventually) in both the character Larson is playing next month and the character Marvelman (a.k.a. Miracleman), famously written for a time by Alan Moore and later Neil Gaiman and recently bought by Marvel (but not to be confused with their Captain Marvel).

Around the time of that purchase (and with two potentially lucrative Hollywood projects ramping up), DC Comics resolved to call their character simply Shazam (which had formerly been the magic word that the character shouts and the name of his wizard mentor but not technically his own superhero moniker). And by accident or design, after decades of fictional life, the two Captains Marvel will soon appear, albeit one using the name Shazam, in theaters within weeks of each other. Both characters have as an m.o. the radical transformation of his/her body into a very different, almost alien one. Perhaps in a perfect world, the Captains Marvel would briefly transform into each other, possibly with help from I.P. lawyers. It’d be nice if the two companies at least cooperated on a team-up comic.

There is, of necessity, a thin line lately between the fictional transformation of superhero universes and the mangling of the real-life contractual rights surrounding those characters. Marvel fans in particular have been waiting to see whether Marvel movies will suddenly feature, side by side, all the different characters who for the past couple of decades have had their film rights parceled out to different studios but are now, piece by piece, being reacquired by Marvel proper. The hope was that almost the instant the ink was dry on the necessary contracts, all the characters who’d been in the hands of Fox—mainly the X-Men and Fantastic Four—would suddenly appear in Avengers movies, perhaps as soon as this April.

It could happen, in theory. But despite all the anticipation and possibilities, I now have a far more pessimistic and realistic prediction: Marvel doesn’t want to come right out and tell you that I.P. wrangling, studio mergers, and actor contract renegotiations are more terrifying than Skrulls, but the truth is that with so much money at stake and so many production wheels turning, they have a big incentive to avoid (for now) any set of characters that’s still a bit “radioactive” from recent contractual battles (or bad box office on recent iterations), so long as they have plenty of other popular characters to choose from.

In fact, given the rising pay demands from the core original Avengers actors, the rubble only now settling from the Fox-Disney film studios merger, the cancelation with what amounts to a non-compete period of the Marvel Netflix shows, some residual tension with Spider-Man-controlling Sony, and the unpopularity of the short-lived Inhumans series, I bet that Marvel fans don’t get to see (respectively) the original Avengers, the X-Men and Fantastic Four, the Defenders, Spider-Man, or the Inhumans again for several years after 2019.

After all, with no contract headaches at all, Marvel Studios has Black Panther, Dr. Strange, the aforementioned Captain Marvel, Ant-Man, and other characters to play around with for a while—characters who fortunately constitute the New Avengers in the comics, more or less, and thus should seem like a natural next step to the fans anyway.

By the time those characters are played out, the other contractual issues will probably be fully and firmly in the past (and terrible versions of the Inhumans and Fantastic Four forgotten)—and the public will be ready for a reboot of the whole universe. I say this despite being a man who’d be as delighted as the next guy if Hugh Jackman has a surprise cameo in Avengers: Endgame in April. It just seems like a bigger corporate can of worms than necessary, though, even if the merger is supposedly all settled.

But while you’re waiting for the New Avengers, sample weirder stuff, like a nervous comics-buyer venturing past the Marvel section of his local comics shop for the first time.

Alita: Battle Angel, regardless of what critics or box office returns may have told you, is Robert Rodriguez’s best movie and captures many anime nuances such as eight-foot battleaxes and frequent dismemberments, with the bonus that the producers set aside some money to give a real-life amputee (about as cute as Alita but not appearing in the film) cool-looking bionic arms.

The Netflix series Umbrella Academy, like the Gerard Way-written comic on which it’s based, is a natural-feeling, indie-infused blend of Wes Anderson, X-Men, Salman Rushdie, and Grant Morrison influences (with the added timely weirdness of weeping, Jussie Smollett-defending, Mike Pence-blaming Ellen Page playing the most put-upon outcast in the fictional family).

DC Universe’s Doom Patrol series, with its physically and mentally damaged superheroes, shows the quirky influence of (Scottish anarchist postmodernist comics writer) Grant Morrison as well, and his influence is stronger still in the recent Syfy series Happy! about a miserable, cynical, drunk cop in a very dark and violent world who needs his upbeat flying cartoon unicorn imaginary friend (voiced by Patton Oswalt) to stop a psychopathic kidnapper.

The farther removed from the center of corporate control you get these days, and the weirder the people you meet, the more sense things seem to make.