The Truth Behind Gender Pronoun Activism 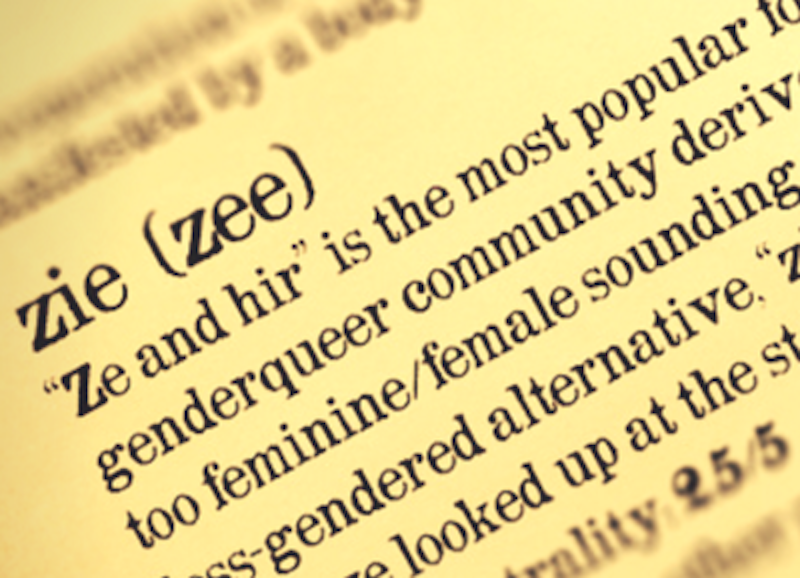 I’ve been sectioned countless times under the Mental Health Act of 1983, and have met my share of transsexuals. One meeting occurred in the summer of 2006, shortly before my only serious suicide attempt. There was still a smoking room on the ward; the New Labour blanket ban of smoking in all public buildings hadn’t yet taken effect. I’d pass my days chain-smoking with the other psychiatric patients, feeling sorry for myself, working out ways to psychologically attack the staff however I could.

There was a new woman on the ward, a patient who was tall, attractive, with nearly waist-length blonde hair. Eventually I realised she/he was a transsexual. I offered her a cigarette. She waved her hand, smiled in a sinister way and began talking in demonic-sounding Italian. I’ve always remembered that, especially when I read about new cases of transgender females convicted of rape. As somebody who has a diagnosed mental illness (bipolar) and has strongly contested it, fruitlessly, for 15 years, I’ll always believe transsexuality is a psychiatric disorder. Indeed, Gender Dysphoria is listed in the DSM. I believe every single transsexual is more mentally ill than me.

Dr. Paul McHugh wrote in The Wall Street Journal: “The transgendered suffer a disorder of ‘assumption’ like those in other disorders familiar to psychiatrists. With the transgendered, the disordered assumption is that the individual differs from what seems given in nature—namely one's maleness or femaleness. Other kinds of disordered assumptions are held by those who suffer from anorexia and bulimia nervosa, where the assumption that departs from physical reality is the belief by the dangerously thin that they are overweight.”

In the recent catastrophic Channel 4 interview with Canadian author and clinical psychologist Jordan B. Peterson, Cathy Newman asked this question: "Why should your right to freedom of speech trump a trans person’s right not to be offended?”

Peterson replied: “Because in order to be able to think, you have to risk being offensive. I mean, look at the conversation we’re having right now. You’re certainly willing to risk offending me in the pursuit of truth. Why should you have the right to do that? It’s been rather uncomfortable. You’re doing what you should do, which is digging a bit to see what the hell is going on. And that is what you should do. But you’re exercising your freedom of speech to certainly risk offending me, and that’s fine. More power to you, as far as I’m concerned.”

Peterson had publicly stated he’d be willing to risk jail and go on a hunger strike to protest the legal enforcement of preferred gender pronouns. An act to amend the Canadian Human Rights Act and the Criminal Code was passed on June 19th 2017, making it illegal to mis-gender a person, or to refer to them by their birth pronouns and not their chosen ones.

We’ve come a long way since The Silence of the Lambs, whose initial release was protested by certain trans activists back in 1991, but didn’t stop it sweeping the Oscars. I remember Dr. Lecter’s words to Clarice Starling on the nature of serial killer Buffalo Bill: “Billy is not a real transsexual…”

It’s difficult to know what a “real” transsexual is, especially in today’s offense culture, and how there are many transgender people who’ve not had reassignment surgery, just simply wanting to be referred to by whatever pronouns they feel like that day.

The conservative YouTuber Blaire White could be called beautiful. She has released videos publicly stating that transsexuality is a mental disorder, which enraged trans activists. Even though White is, for all intents and purposes, telling the truth, her critics can’t stop their online harassment and abuse of her. The post-modern, neo-Marxist left endlessly go on about the “violence” inherent in speech, but I believe there’s a larger agenda at work.

Actress Rose McGowan was recently heckled at a Manhattan bookstore while promoting her new book Brave, and the clip went viral, prompting McGowan to cancel all further tour stops. Transgender activist, Andi Dier, shouted: “Trans women are dying and you said that we, as trans women, are not like regular women. We get raped more often. We go through domestic violence more often. There was a trans woman killed here a few blocks from here. I have been followed home.”

Accusations have come to light since the incident that Dier has a history of sexually assaulting teenage girls.

Why is it so important to trans activists that gender pronouns be legally binding? The intersectional feminist Laurie Penny has the answer in her neo-Marxist manifesto Bitch Doctrine: “We can only become what we can imagine and we can only imagine what we articulate. That’s why language matters to our lives; that’s why little changes in grammar and vocabulary can affect the entire architecture of our political imagination. Today, signing ‘Mx’ on an application form or an electricity bill is an act of linguistic rebellion but tomorrow it could be ordinary. And that is how you change the world.”

It’s obvious why trans activists protested Milo Yiannopoulos, Ann Coulter and Ben Shapiro at US colleges (all three are vocal trans-skeptics), and “safe spaces” were set up to counsel anybody who was emotionally devastated by their mere presence. Shapiro’s said: “Facts don’t care about your feelings.”

In a minute-to-minute media culture, more people are writing (texts, posts, blogs etc.) but fewer appear to be reading, making unfounded snap judgments about complex issues. There’s narcissism inherent in the use of Facebook, Instagram, Snapchat and Twitter. There’s an unbelievable need for people to feel as though they are validated. Echo chambers are safe spaces and cognitive dissonance is strategically avoided with the block or dislike button. This partly explains the rage of online trans activists, endlessly confronted with a reality they can’t bear to face up to, but a great deal of it also comes down to the fetishistic nature of transsexuality. In Michelle Goldberg’s article for Slate about transgender apostates, she interviewed two trans women who are now dating, Miranda Yardley and Helen Highwater, born male, but both feeling that their Gender Dysphoria was treated by transitioning. Yardley said, “I’m male, I own it. We identify as a gay male couple.”

The search for personal identity isn’t new. Logical people take exception to the legal enforcement of preferred gender pronouns, saying that the very idea is totalitarian, and unscientific, despite the dispiriting fury of those who argue that gender is a social construct. The idea that there’s no such thing as a “woman” or a “man,” that it’s possible for the penis to be female, or the vagina to be male, helps nobody, and should be opposed. A human male who transitions to appear more like a female, will never be a female, and will never have the same experience as a female, and vice versa.

In my younger, drug-taking days, I was in a nightclub and a beautiful woman thrust her tongue down my throat and suggested we pop into the bathroom for some privacy. She may not have been as beautiful as I first thought, and I felt down her cut-off jeans, and realized that she was a transsexual. I didn’t immediately recoil, but she certainly saw something in my eyes that she didn’t like. I politely broke free from her. Later in the night I saw her again, sitting on one of the couches. She was staring at me angrily, and, yes, a little sadly. “Sorry,” I said, and quickly left the club.