Fiorina’s Face Is Not a Feminist Issue 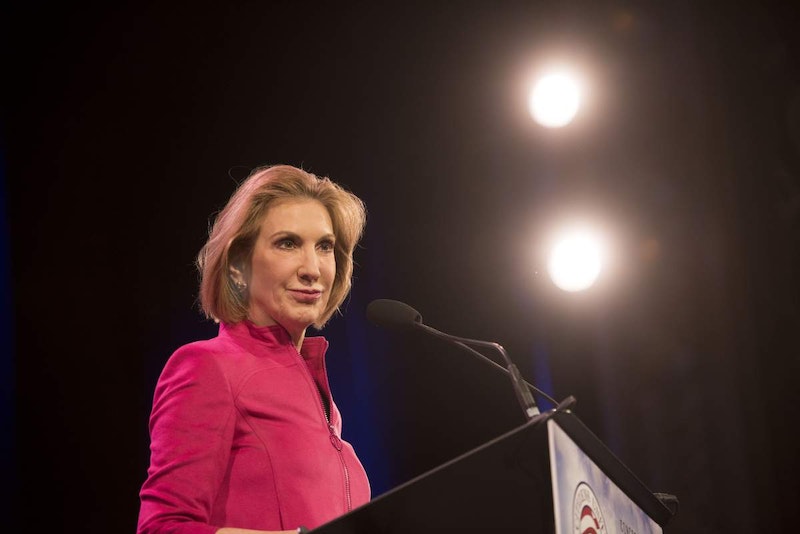 “It's still different for women,” Carly Fiorina said, speaking with deliberation. She and the TV reporters were about to share a moment. “It's only a woman whose appearance would be talked about while running for president,” Fiorina continued. “Never a man. And that's what women understand. Women are half this nation. Half the potential of this nation. But somehow we still spend a lot of time talking about women's appearance and not their qualifications.”

Oh, “never a man.” About a sixth of all political comments during the past three months—all political comments, not just the ones about the race—have had to do with Donald Trump's hair. I have no source to back up that claim, but it has a better shot at being true than “never a man.” You know that you've heard a million jokes about the big guy's hair. You know you've heard more jokes about Chris Christie's weight than you've heard commentary of any sort about Fiorina's face. No one said anything about her looks until Donald Trump shot off his mouth near an alert fellow from Rolling Stone.

The TV reporters knew this too. Anybody does who follows the campaign coverage. Trump's comment was not the norm for a campaign, it was the exception, and that's why it made the news. But CNN's good people nodded along with Fiorina as she unspooled her thoughts. My guess is that they did so because, in general, women do get judged on their looks more than men. It's a problem and it deserves to be talked about. But it hasn't been a problem for Fiorina, not in this race. She's pretending otherwise because that gives her a chance to act high-minded while playing the victim.

When Fiorina ran for the Senate in California, she had as much to say about Barbara Boxer's hair as Trump has to say about Fiorina's face. She also had a lot to say about Boxer's record, just as Trump has a lot to say about Fiorina's. Talking about appearance is not something they do instead of talking about qualifications. They do it as a side dish, just because it's fun. The two fateful remarks, Fiorina's and Trump's, weren't even meant for voters. Trump was on his jet, goofing with cronies while the TV played, and he forgot a reporter was around. Fiorina was talking into a hot mike, then realized her mistake and clapped her mouth shut.

But Fiorina had to get pious with CNN. To keep her from being a liar, I will now spend a paragraph talking about the appearance—and not the qualifications—of this female contender for president. Fiorina is remarkable for her looks. To call her ugly would be to miss the point. Her face is harsh and it's improbable. Looking at it, it's hard to believe that human flesh could achieve this configuration. True, a number of the Republican contenders make me rub my eyes. There's Bobby Jindal's wizened, leathery mug and snapping eyes (his face looks like it was left over from something else, and like it's really not happy about how things wound up). There is Christie's fabled gut, and the proud mountain of stomach that Mike Huckabee fits between himself and the podium. There's Donald Trump and his ruddy sack of a face—plus the hair, of course. But all these men look like failed attempts to reach the human norm. Fiorina looks like something else. She looks like Balok from that episode of Star Trek, the one with the scary alien whose face is a combination of a skull and a light bulb. Eventually he turns out to be a front put up by a nice alien who just wanted to scare people. But behind Fiorina's face there's just Fiorina.

Oh well, I see that I’ve failed. I didn't show that only women have their looks talked about. Instead I talked about the men too. Even if I’d stayed on course, my paragraph would have proved nothing, not with everything everyone else has said about Christie's physique and Nixon's jowls and Reagan's Ruffles-like complexion. And when it comes to keeping Fiorina truthful, this question of presidential candidates and how they look is just one front in a vast struggle. At the very least, I'd have to get a fetus and persuade Planned Parenthood officials to do mean things to it while I made a video clip. Really, keeping Carly Fiorina from being a liar is way too much work. If she isn't going to try, I won't either.