Jonathan Krohn, the American Right and the Tragedy of Existence

Conservatives who noticed have now declared that he’s no damn good and never was. 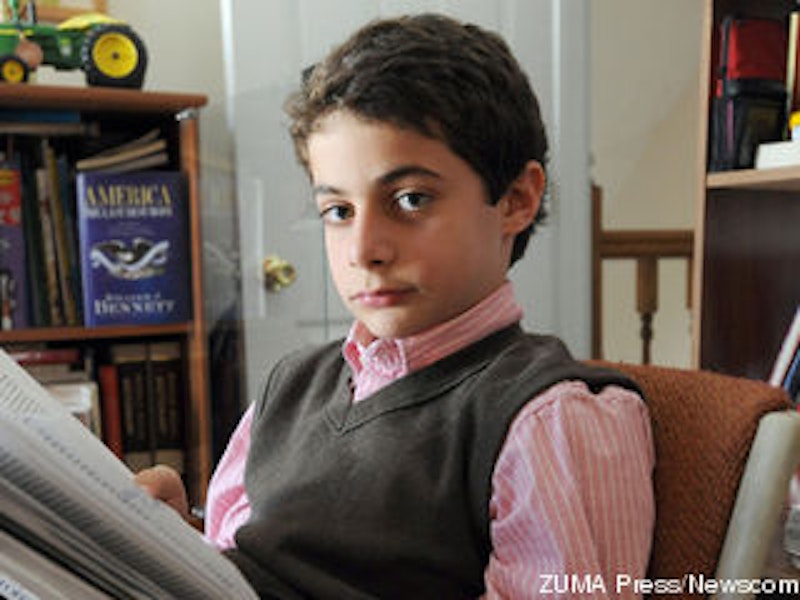 Not too long ago my colleague Noah Berlatsky lodged his objections to an attack by Bill Maher on right-wing pundits. What Noah objected to was that Maher insulted 14-year-old boys as a way of insulting wingers. Maher: “When 14-year-old boys sound exactly like you do, and can produce radio shows and books and speeches that sound exactly like yours, maybe you should rethink the shit that’s coming out of your mouth.” Noah: “Maher’s teen-baiting is… offensive, prejudiced bullshit. Teens are among the last groups in this country that everyone—conservative, liberal, moderate, libertarian, or whatever—feel they can insult with impunity.”

The charge brought the response that such charges must always bring. In this case commenter Texan stepped up and delivered. Texan: “Another great example of political correctness run amok brought to you by Noah.” Well! In a development that looks good for the Texan side of the case, an adolescent male has let it be known that he doesn’t mind Maher’s joke. The boy in question is Jonathan Krohn, one of the teenage pundits Maher was talking about. Maher even played a clip of the notorious (in some circles) speech that Krohn gave back in 2009, when he was just 13. (To quote a description from the time, the boy came off “exactly like Al Franken imitating a wingnut blowhard, but miniaturized way down. He’s got all the authoritative hems and haws and the body language, but the bridge of his nose is such a tiny distance over the microphone.”) Krohn told a reporter from Politico that he bears Maher no ill will. “I have no problem with what Bill Maher said,” the boy said. “He’s funny.”

Krohn also said that he’s no longer a conservative and wants to think out the issues a bit more. He told Politico as much, and conservatives who noticed have now declared that he’s no damn good and never was. The right-wing site Daily Caller quotes an unnamed source to the effect that Krohn, at age 13, was a “douche.” We know that the source isn’t Maher because he or she attended the Conservative Political Action Conference, where Krohn gave his talk. The article, getting very inside, says that Krohn “lobbied hard” for his CPAC slot. Really, the article suggests, the kid is quite the hustler: “Krohn’s conformist embrace of nonconformism won him fast new friends. By Monday night, Krohn was fielding dozens of new Twitter followers, thanking them for their admiration and support and aggressively offering a few the chance to take a peek at his newest screenplay, which he pitches as a ‘dark, postmodern satire of modern American life.’”

There you have it: dozens of followers, and he says—aggressively!—that people can read his screenplay. (Krohn is going to study philosophy and film at New York University.) A decade ago fans of the right would explain unfortunate inside revelations about the Bush team by saying the defectors just wanted to sell books. Four years ago they explained conservative pundits who couldn’t stand Sarah Palin by saying the defectors wanted to go on CNN and appear at fancy Georgetown cocktail parties. Now the Caller explains Krohn by implying that he’s after the real action, the big time measured by how many dozens of extra people read your Tweets. A member of the Caller staff filed a brief dissent pointing out that Krohn could have done quite nicely for himself if he had stayed with the right, given that such an allegiance often brings book deals and a “cushy gig at a conservative think tank.” But nobody seems to have noticed the dissent except Krohn himself. He and the author got into a beef on Twitter because the item also says Krohn deserves grief for his offensively framed glasses and his willingness to list the philosophers he likes to read.

The other boy pundit that Maher referenced was Caiden Cowger, who hates gays and does podcasts. He’s still 14, so as of yet he has not wrong-footed any conservatives. (Neither has he received the memo on Krohn, identified as “one of my favorite authors” on Cowger’s website.) Cowger stands as evidence against at least part of Maher’s attack. Maher says that any 14-year-old boy could do what Rush Limbaugh does. Cowger shows that this 14-year-old can’t. He flounders, flubs his grammar, and keeps repeating his topic sentence in hopes it will become an argument. Still, he’s out there trying. “Known for his quick wit, candid opinions, and engaging personality,” his site tells us, “Caiden Cowger has attracted dozens of viewers and listeners throughout the United States with The Caiden Cowger Program.” Yes, dozens. No wonder Krohn switched to Twitter hustling.

Given this tour of the facts, who is right—Berlatsky or Maher? The easiest way to describe a magazine that calls someone a douche (and in a headline: “Tired of being typecast as conservative, ‘douche’ actor and CPAC speaker Jonathan Krohn turns to liberalism”) is to say that it’s acting like a kid, and not the sort of kid that’s sitting on its grandma’s lap or laughing at soap bubbles in the backyard. The kid in question would be struggling with bolts of testosterone that surge directly to its mouth. It would be a he, and the he would be 14 or so. Except that nobody putting out the Daily Caller is 14, and the two boys involved in our story are not known for trafficking in curse words. Caiden Cowger is more than a bit prissy and reprimands Maher for talking like “a sailor.” After all, Maher called his kind a bunch of dicks, and Maher is 56, not 14.

Thinking of the few 14-year-old boys I know, I must admit that when they’re around they seem decent enough. They look like they’re all knees, elbows and neck, and they don’t know very much, but neither do they do any harm. Yet, as Noah points out, adults everywhere feel entitled to mock teenagers and boss them around. In fact I just made fun of them myself. Why?

One reason is that stereotypes are fun. They combine purely mental comfort—the surefire shortcut that tells people what you mean—with a deeper comfort that touches the psyche. We’re all stuck in a world where this lonely beacon of awareness called I is surrounded by a sea of faces that is called humanity. Each lonely I is forced to treat this sea as if each of the faces fronted a human consciousness as valid and real as the I itself. But (excuse this construction) the I does not find in itself any evidence that any of the faces actually represents such a consciousness. Instead all the evidence comes from outside, and most of this evidence arrives in the form of negative reinforcement. It sure feels like only you are real, but act that way and somebody will get in your face and encourage you to stop. So the I is forced into a lifelong charade. This makes for an uncomfortable situation. That being the case, there’s nothing like finding some designated mass of others and giving it a whack. That’s the closest you can come to letting the vast sea know what you think of it and the way it crowds you.

Next, teenagers are one of the few groups that allow the chafed and imposed-upon I to have it both ways. By now people have learned something about the games we play. We know that we use difference (of skin color, nationality, religion, etc.) as an excuse for acting like jerks toward one group or another. We decide the trick is to find a group of others that is not other. An adult making fun of teenagers is not a teenager, but he or she used to be, so what the hey? And this dodge is supported by a degree of truth. Sure, if you think you’re right and a kid is wrong just because they’re a kid, then you are a fool. But dumb as any given person may be, they can probably remember times when they were much dumber, and those times are likely to cluster toward the start of their life. With luck we spend our lives adding on to our minds and improving them. But a teenager has to do deeper work than that. A teenager has to start down near the foundation and then start building. The process can involve a lot of messiness and false starts, and most often it’s better for everyone if the rest of us don’t have to look.