The Republicans have the money and a message, but a bad candidate atop their ticket. 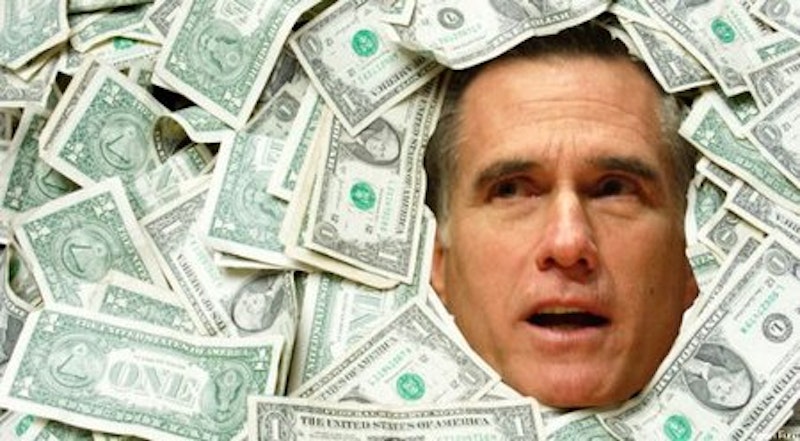 The three building blocks of any successful political campaign are: Money, media and organization. It’s possible to win with any two as long as one of them is money. Under that formulation, Republicans should win the November elections without breaking a sweat, if only they had a more compelling candidate at the top of the ticket. No matter the rant, rave and incredulous spin, the symmetry of the GOP message delivery system is an illustration of news management in motion.

Except for another awkward moment by the Romney campaign, ever the verbal contortionists, if not amnesiacs, Republicans have been remarkably true to their talking points, no matter how fanciful and far-fetched. Following the Supreme Court ruling on health care, the Romney campaign described the controversial individual mandate as a penalty or a fine, a conflict with Congressional Republicans who characterize it as a tax.

Bending to their way of thinking, Mitt Romney later agreed, corrected his campaign spokesman and called it a tax, aligning himself with conservatives on Capital Hill. There’s no way out for Romney on the issue, who, as governor of Massachusetts, pioneered the individual mandate by calling it a fine. Come now reports that after a week of missteps and competing messaging, Romney intends to bulk up his communications staff. All of which proves that Romney will say anything but believe nothing.

Politics is a form-follows-function kind of business. The object of modern political communications is to lay out a political road map of the opposition fast and first—define your opponent before he can define himself. It’s also called framing the issue, a skill at which Republicans have often out-performed Democrats. On the health care issue, for example, the phrase “death panels” nearly defeated the legislation, and now they are at it again by calling the individual mandate a tax because that’s how the Supreme Court defined it to end-run the constitution.

The conservative side of the equation, which tilts heavily Republican, began to assemble all of the pieces of modern propaganda techniques during the presidential years of Ronald Reagan (1981-89). They all came together in the run-up to the 1994 elections and the unifying theme of Newt Gingrich’s “Contract with America” when the GOP swept Congress—just as it did in 2010 with the rise of the Tea Party.

Funny thing about that, though. Now that the GOP primaries are over and the base has more or less calmed down, there’s rarely a mention of Reagan, even by the party’s undeclared nominee, Romney. Democrats might remind them, if that were the case, that Reagan was not the conservative his speeches made him out to be: He raised taxes 11 times as governor and president; he raised the debt limit 17 times in eight years as president, the most in history; he ran up the largest budget deficit in history up to that point; and he granted amnesty to three million illegal immigrants. But that was all before the Tea Party forced the GOP over the edge, beyond where even Reagan would have taken it.

Now, thanks to the Supreme Court, the combined forces of the GOP will have more money than Democrats overall because of the ruling that says corporations are people with factories and smokestacks. The so-called Super PACs have collected undisclosed millions to do their insidious work on behalf of both major parties, but moreso Republicans because, well, they have more money. They are the anthropomorphic one- percenters.

But the Supreme Court gave the GOP another very significant but largely overlooked financial boost. It ruled that unions, the largest collective contributor to Democrats, must now obtain permission from their memberships before they can dip into their dues pools for political contributions.

Even the witless Romney (“corporations are people, my friends”) is raising more money than President Obama, so much so that Obama was forced to make personal appeals to donors to increase their giving. In the 24 hours following the court’s confounding 5-4 ruling upholding the Affordable Health Care Act, the Romney campaign boasted of hauling in nearly $7 million in accelerated contributions. Romney’s total take in June was $100 million. The presidential campaign so far is a duel of speeches and ads over broken promises vs. outsourcing.

Karl Rove’s Crossroads GPS, a conservative non-profit group, for example, is purchasing $25 million worth of anti-Obama advertising in swing states attacking the President’s record on job creation. Super PACs and outside groups may elect the next president and not the voters.

But the true genius of the Republicans began when Reagan arrived in Washington to complete the conservative revolution that Barry Goldwater began in 1964 but was crushed by Lyndon Baines Johnson following the assassination of John F. Kennedy. Reagan was followed to the nation’s capital by a tide of money and ideas and, more than anything else, a unity of purpose. The conservatives, with funding from such ideological sugar daddies as Richard Mellon Scaife, underwrote think tanks such as the Heritage Foundation, the American Enterprise Foundation and the Cato Institute, to name three, to match the flow of liberal ideas from the Brookings Institution.

It was upon that foundation that Gingrich built his 10-point “Contract with America,” the unifying message that rumbled across America and drew Republicans into a cohesive electoral force. Democrats simply cannot match the single-mindedness and determination of the GOP to dismember and dismantle the prevailing social structure. That is their message, simply put.

Congressional Republicans, of course, are beholden to such foam-at-the-mouth enforcers and sources of campaign funding as the National Rifle Association, which forced many swing-district Democrats to vote for censure of Attorney General Eric Holder, and Grover Norquist’s Americans for Tax Reform, which compels GOP members to sign anti-tax loyalty oaths under threat of financial and ballot reprisals. In return for their blind fealty they get campaign money and ballot protection.

At the same time, a new phenomenon reared its ugly but persuasive head back in the 1990s: Talk radio. The new inter-active medium not only revived the moribund AM radio band but it took on a life and a cause of its own. It was unabashedly conservative and Republican and often was fed its daily talking points from the GOP bunkers in Washington.

By contrast, where liberals and Democrats attempted to mimic the powerful communications medium at the national level they largely failed. Liberalism does not play well on radio. Talk radio is largely a medium of bellyaches and gripes but Republicans employ it successfully to convey their message—the destruction of everything Obama.

After talk radio broadcasting established itself as a conservative bullhorn came the explosion of electronic gadgetry that displaced the fax machine and created a new world of narrowcasting to specialized audiences around the world and gave birth to the latest political revolution, the Arab Spring in the Middle East and the Occupy movement in America.

The GOP, nationally and locally, is aided and abetted by the likes of the ubiquitous billionaire Koch brothers and the casino mogul Sheldon Adelson. The Koch brothers fund disparate (self) interests such as the American Legislative Exchange Council and gubernatorial campaigns (Scott Walker of Wisconsin) while Adelson has pledged to contribute $100 million to Super PACs associated with Romney after blowing $25 million on Gingrich’s losing primary. Adelson appears more interested in Israel than America.

Through ALEC, the Koch brothers and other GOP fellow-travelers are able to influence governors and legislatures across the country to embrace conservative causes. No endeavor makes their hearts go pitter-patter more than the destruction of public sector unions. And a close second is the push for voter ID laws that discriminate against the young, elderly, black, Hispanics and poor—those most likely to be Democrats.

The drive to require voter ID is a nationwide GOP undertaking that is supposed to detect and prevent voter fraud. Voter ID laws have been enacted in some form in 16 states, most recently in Pennsylvania where one Republican legislator boasted that the requirement will help to defeat Obama. Michigan’s Republican governor, Rick Snyder, recently vetoed an attempt to broaden the state’s voter ID law. Sixteen other states require some form of voter ID other than photo. Yet study after study has concluded that voter fraud is minimal to non-existent. The Department of Justice has challenged voter ID laws in South Carolina and Texas.

The GOP now controls 26 governorships. They have been most effective in curtailing public employee unions in Indiana, Louisiana and Wisconsin where Walker survived a recall election that was largely funded by unions. In Pennsylvania, the Republican-controlled state house is in a pitched battle with teachers’ unions over a school voucher program, another union-busting tool.

Put another way, the Republican party is more of a national party than the Democrats not only because there are a lot more red states than blue but because the GOP is more of a cohesive, single-minded network that is dominated by money. The major benefit of being the party out of office is the will and the means to win. It’s their message that’s defective.