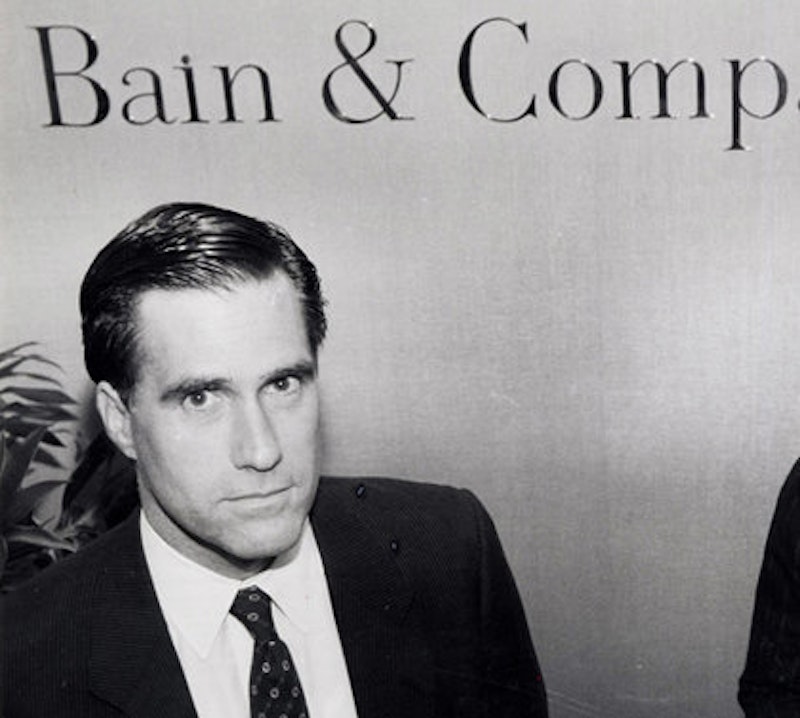 Drawing a parallel between President Obama's occasionally incendiary pastor Jeremiah Wright and Mitt Romney's private equity company may seem far-fetched. But I think there's something there… and not just because the comparison is likely to piss off just about everyone. Consider: both Obama and Romney owe their political success in part to their unique identification with important elements of their party's base. Obama: the black community, which is numerically and morally central to the Democratic Party. Romney: the financial sector, which is monetarily and ideologically central to the Republicans.

Both Obama and Romney have gained major advantages, both in the primaries and the general election, from their unique relationship to their base. Obama's blackness, of course, made his candidacy a historic event, energizing both black and white voters, and allowed him to make a progressive promise of change that he has largely (though not entirely) failed to deliver on. Romney's close ties to the financial community and to the extremely wealthy have given him access to giant gobs of cash, with which he cheerfully buried his primary opponents and which is allowing him to run a competitive general election campaign despite the fact that virtually every sector of the electorate, whether conservative, liberal, or in-between, finds him personally unappealing.

However, their close identification with African-Americans and the 1%, respectively, have also come with costs. For Obama, the downside came in the form of Jeremiah Wright, the pastor of Obama's church. After centuries of oppression, there are members of the black community who, understandably, are less enthralled with the American experience than their white neighbors. Wright, following in the footsteps of Malcolm X and other black nationalist figures, would sometimes lace his sermons with phrases like  "... not God Bless America. God damn America." Which is not the sort of thing you're supposed to be condoning if you're running for President.

There are important differences between Obama and Romney too, of course. The first of these is that, important as African-Americans are within the Democratic coalition, and despite Obama's own success, the fact remains that black people as a whole remain a lot more marginalized in our culture than super-rich financiers as a whole… to understate the case somewhat.  As a result, Jeremiah Wright was potentially much more damaging to Obama than Bain is to Romney. Americans have a visceral understanding of race-baiting; class warfare tends to just confuse them.

But while Wright was potentially more deadly, Obama did have one advantage—he didn't actually agree with his pastor. Many African-Americans (and plenty of other people, too) can understand Wright's bitterness and disappointment with America's past, but that doesn't mean they necessarily share his assessment of America's present or of its future.  Obama doesn't, which he explained in one of the greatest American political speeches in recent history.

"But the remarks that have caused this recent firestorm weren't simply controversial. They weren't simply a religious leader's effort to speak out against perceived injustice. Instead, they expressed a profoundly distorted view of this country—a view that sees white racism as endemic, and that elevates what is wrong with America above all that we know is right with America; a view that sees the conflicts in the Middle East as rooted primarily in the actions of stalwart allies like Israel, instead of emanating from the perverse and hateful ideologies of radical Islam."

Obama was able to articulate his specific differences with Wright, as well as to explain that:

"But the truth is, that isn't all that I know of the man. The man I met more than twenty years ago is a man who helped introduce me to my Christian faith, a man who spoke to me about our obligations to love one another; to care for the sick and lift up the poor. He is a man who served his country as a U.S. Marine; who has studied and lectured at some of the finest universities and seminaries in the country, and who for over thirty years led a church that serves the community by doing God's work here on Earth—by housing the homeless, ministering to the needy, providing day care services and scholarships and prison ministries, and reaching out to those suffering from HIV/AIDS."

Obama, then, could articulate not just what was wrong with Wright, but what was right. He could point to the second to explain why he was associated with the man—and to the first to explain that, no, he didn't actually agree with him on everything. Obama defended himself by saying that, though he admired Wright for some things, the two are, in fact, different people.

When you try to apply this paradigm to the Bain scandal, you can see Romney's dilemma. He can claim he left Bain in 1999, not 2003; he can say that he wasn't involved in this or that outsourcing; he can insist that he didn't have anything to do with the company's decision to invest in a fetal disposal company. But what he can't do is explain why he and Bain are two different people.

Romney is not willing to explain which parts of Bain he supports and which parts he feels are evil, because he doesn't think it's evil. Bain is at the center of Romney's life, career, and philosophy in a way that Jeremiah Wright really is not at the center of Obama's. Obama does not secretly hate America; Romney does, truly, love capitalism, in all its creative destructive glory. He almost certainly doesn't even think there's a problem with outsourcing, as Alex Pareene points out. Romney can't explain why he's not responsible for Bain because, whether he was or wasn’t responsible, he doesn't fundamentally disagree with anything Bain did. I mean, do people who think Romney was not at the head of the company in 2001 really believe that he would have stopped all this outsourcing nonsense if he'd been there?

Romney, then, is stuck with Bain. To put it behind him, he'd have to make a convincing critique of the excesses of capitalism, or of certain kinds of capitalism, or at least of Bain, and there is simply no indication that he is either willing or able to do that. It's hard to say how much that will hurt him in the long run; from the polls, he looked like he was going to lose in a tight race before the recent outcry, and it still looks like he's going to lose in a tight race. But win or lose, it'll be with Bain tied around his neck. Romney's known for being a political chameleon with no principles, but it looks like he's finally found the principle he can't or won't betray, and it's name is private equity.