Bill Maher is a Dick

His teen-baiting is offensive, prejudiced bullshit. 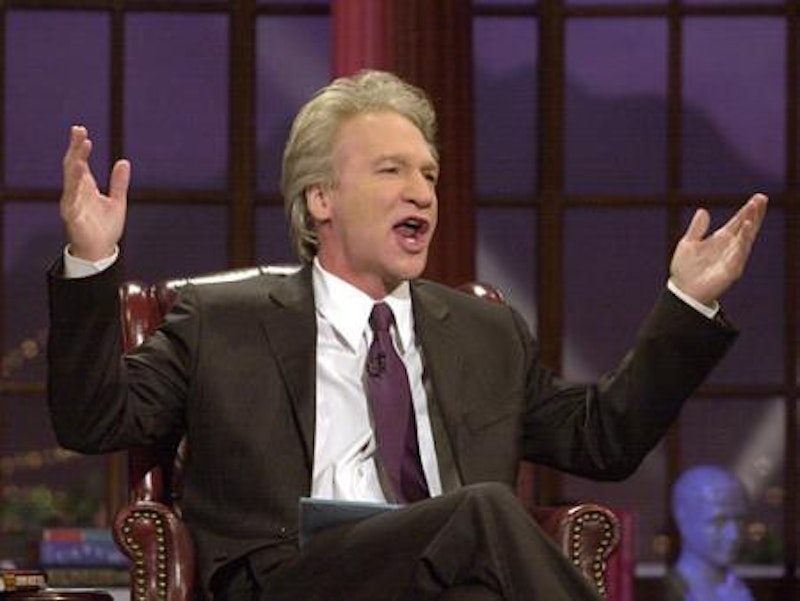 This month, Caiden Cowger, a 14-year-old local right-wing radio talk show host, obtained notoriety by launching into a homophobic rant in which he blamed President Obama for turning his classmates gay and assured his classmates that they were going to hell.

Bill Maher, however, takes a different tack.  Rather than objecting to what Caiden says, he makes fun of him… for being 14.

"I mean, I'm not trying to slam these kids, because, look, being an asshole is totally understandable when you're 14. You're too young for sex and too old to carry your blankie around everywhere.  It's a very stressful time. But, my point is to Republican adults. And it is this. When 14-year-old boys sound exactly like you do, and can produce radio shows and books and speeches that sound exactly like yours, maybe you should rethink the shit that's coming out of your mouth. (wild audience cheering and applause)

Remember the Republican debates we had this year? They applauded for the idea of letting a sick man without insurance die. Herman Cain got cheers for saying he'd electrify the border fence. They booed a gay man serving his country in the military. No wonder 14-year-old boys can do your act. You act exactly like 14-year-old boys.  There's no ideology here.  It's just about being a dick. "

You'll notice that the left doesn't have any teen prodigies.  You're not going to find a 14-year-old who can do Rachel's show. But to do Hannity, or Rush? It's a very simple procedure. Step 1: Be a giant dick. Step 2: There is no step 2! (highlighting by daily kos.)

This is a boy named Jamey. He was 14 when he recorded that video for the "It Gets Better" project. Subsequently, he killed himself because of bullying by his classmates. Jamey's video brings up a couple of points. First, there are lots of 14-year-olds out there who are pro-gay-rights. In fact, if polls are any indication, young people are much more likely than older people to support gay rights. If you support gay rights, then you should probably be touting the views of young people, not belittling them. In fact, the fastest way to legalize gay marriage across the country would be to extend voting rights to Caiden Cowger and everyone his age. If 14-year-olds and up were voting, our political landscape would be a lot more in sync with Maher's liberal views. If, on the other hand, the political views of young people should be discarded, then it's liberals who will be hurt, not conservatives. A gerontocracy doesn't help Maher, and it certainly doesn't help gay people.

Maher's teen-baiting is, then, bad tactics. But more than that, it's offensive, prejudiced bullshit. Teens are among the last groups in this country that everyone— conservative, liberal, moderate, libertarian, or whatever—feel they can insult with impunity. They are treated as a dangerous, unstable population that must be systematically controlled through increasingly authoritarian institutions. They are sexualized and simultaneously condescended to in order to satisfy the self-righteous hypocritical prurience of their elders. And, as Maher shows, they are presumed to be by definition stupid, unstable and incompetent.

Maher claims that a young person couldn't do what Rachel Maddow does, or, by implication, what Bill Maher is doing. And it's certainly true that 14-year-olds generally aren't in a position to obtain high-powered media positions for a whole host of reasons, including (but not limited to) the fact that they don't have the right connections. But there's plenty of evidence that some young people can excel at a wide range of professions when given the chance. I very much doubt that Maher has ever created, or will ever create, anything as intellectually or emotionally sophisticated, as Ariel Schrag's graphic novel Potential, written when she was a senior in high school. For that matter, Jamey's heartfelt video is a much more powerful statement for gay rights than Maher's sneering, self-congratulatory pap.

The fact is, many adults are shockingly stupid, cruel, and vicious—as Maher proves just about every time he opens his mouth. Caiden Cowger is determined to show that kids are no better, but it's far from clear to me that they're worse. In any case, making fun of someone because they are disempowered and marginalized is contemptible, whether you're Cowger preaching hatred of gays to a conservative religious audience or Maher going for easy laughs by insulting 14-year-olds in front of a group of liberal adults. Luckily, Cowger will probably quickly vanish into the Internet ether from which he came. Maher, on the other hand, seems determined to keep on keeping on, determined to show the world that liberals can be narrow-minded, bullying shitheads too.