Have Catholic bishops and cardinals forgotten how they got their red hats? 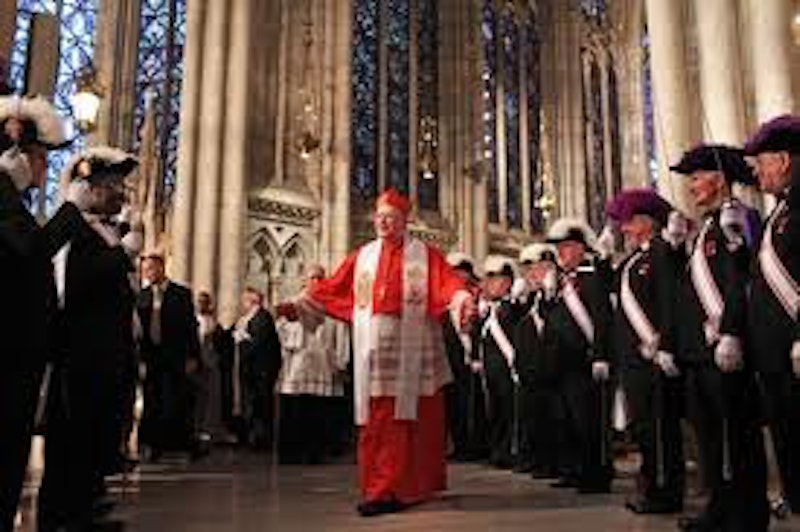 Politicians and theologians are at it again, circling and snarling around the invisible line that separates them under the law of the land. The true miracle of the Roman Catholic Church is that it has survived the Papacy. It’ll be another miracle, perhaps a lesser one, if the Church withstands the American Catholic hierarchy. The bishops appear to be itching for a fight where none exists. So let it be said right up front that miracles may happen at Fatima and Lourdes but not necessarily in the Catholic bishoprics of America.

Back in the bad old days, around 1969 – pre Roe v. Wade, prior to “don’t ask, don’t tell” and certainly decades ahead of same-sex marriage – the big issue for the Catholic Church in Maryland was state aid to non-public (parochial) schools. The ranking prelates of the area, the archbishop of Baltimore, the archbishop of Washington and the bishop of Wilmington (Maryland straddles the three dioceses), had asked for a meeting with the newly-chosen governor, Marvin Mandel (D).

In advance of the meeting, Mandel, the state’s first Jewish governor, was being briefed on how to address the Catholic leaders by their other-worldly ranks and transcendent titles. Wrapping up, Mandel was given one final piece of advice: “Marvin, the most important thing to remember is that they got to be bishops and cardinals the same way you got to be governor.”

Mandel promised to consider the request and a deal was done. A commission was appointed, under Otto Krashauer, then president of Goucher College, and after a year’s study recommended a $6 million financial aid program. There were no hysterical op-ed pieces, no demonstrations and no special masses to invoke the assistance (or wrath) of the almighty. In the case of legislation, God is on the side that has the votes. Mandel muscled the plan through the legislature but it was petitioned to referendum and rejected by the voters. The law was later re-packaged and put into effect, with secular limits on the use of the funds (the money could not be used for religious purposes.)

Now, as then, compromise could work its mysterious ways so that church and state could co-exist in a delicate balance in a pluralistic society. But today’s bishops are mainly conservative hard-liners, a group of balding, (presumably) celibate, middle-aged men dictating the sex lives of America’s 68 million Roman Catholics, and anyone else who’ll listen, following orders from the principal enforcer himself, the pope. The liberal prelates within their ranks are either too timid or too terrified of breaking faith with the authoritarian papacy.

Back in the late 1960s, the Catholic world was cautiously adapting to the transparent reforms of Vatican ll after centuries of mystery, intrigue and ecclesiastical domination. The center of Catholic intellectualism then was headquartered at the Jesuit think tank at Woodstock, MD, where theologians such as Avery Dulles, John Courtney Murray and Gustav Weigal provided the guiding thought behind Vatican ll.

Today, because of its belligerence and overheated rhetoric, the Catholic hierarchy risks resembling the consecrated branch of the Republican party’s evangelical wing and in the long view damaging their interests in capitals across the country. The bishops are challenging the Obama Administration’s health care policies as they apply to reproductive rights.

The order was promulgated by Health and Human Services Secretary, Kathleen Sibelius, a staunchly pro-choice Catholic, who has demonstrated a willingness to accommodate by already compromising once. The bishops call the policy an assault on religious liberty; the policy is really about health care. The bishops refuse to negotiate at the same time they claim to need public relations assistance.

The latter point may be true because polls show that a majority of Catholics do not subscribe to the prelates’ notion that there is a threat to religious liberty. And an even larger majority, in a breach with church teaching, supports the Administration’s birth control requirement. Other polls show that 80 percent of Catholic women regularly use some form of birth control. In fact, birth control was never even an issue within the Catholic Church until 1930 when some long-gone pope issued an encyclical declaiming the practice as morally wrong. There are, too, a number of Catholics who question the dogma of papal infallibility, which wasn’t even a required belief until 1870.

Priestly celibacy has little to do with the single, sexless life, as many Catholics believe. Celibacy is all about property rights and inheritances and the Vatican’s desire to avoid family feuds. Popes and bishops for more than a thousand years, from the beginnings of Christianity, were married and sired children. And over the centuries, many popes were ruthless and corrupt politicians who were more interested in earthly power than in spiritual leadership.

Pope Benedict XV1 and his enforcers have been especially harsh on American nuns (you’d think they’d know better than to mess with nuns.) The Leadership Conference of Women Religious, which represents about 80 percent of the nation’s 45,000 nuns, has been accused by the Vatican of “corporate dissent” from the church’s teachings on homosexuality, contraception and female priests and of generally pursuing “radical feminist themes.” The nuns deny the claim. Nuns, more often than not, run schools, hospitals and charitable organizations such as soup kitchens. But when suppression is required, the phrase “radical feminist” works for the Vatican as well as for Rush Limbaugh.

But one nun is responding not with rosary beads but with defiance. Sister Simone Campbell, of Washington, DC, has launched a two-week cross-country bus tour called “Nuns on the Bus” to protest proposed Republican budget cuts that would hit hardest on the poor and the elderly. But the tour is also making an unmistakable point to the Vatican which has sharply criticized American nuns for being more involved in social welfare programs than with the church’s culture-of-life issues such as same-sex marriage, abortion and contraception.

Much of the recent agitation against the Obama Administration is originating in Baltimore where the newly-installed archbishop, William E. Lori, heads the U.S. Conference of Bishops’ Ad Hoc Committee for Religious Liberty. With a mass last week at the Basilica of the Assumption, Lori launched the Catholic Bishops’ “Fortnight for Freedom” as a challenge to President Barack Obama’s health care policies which he has called “morally objectionable.”

Outside the Cathedral during the mass, according to reports, a crowd of mostly Catholics waved signs contesting the occasion – “Bishops! YOU DON’T SPEAK FOR ME! Freedom For All!”

In an op ed piece in The Sun (June 27, 2012) Lori wrote: “The bishops of the United States hope that the Fortnight. . .will be an opportunity to educate people on religious liberty, as understood in the teachings of our church and the heritage of our nation; to pray together for this precious liberty; and to speak out so as to join with fellow Americans in assuring its preservation for generations to come.”

The U.S. Supreme Court upheld the constitutionality of the Affordable Health Care Act (Obamacare) with the support of two Catholics, Chief Justice John Roberts and Justice Sonya Sotomayor. Lori says, nonetheless, the bishops and the church will proceed with lawsuits to overturn the provision that requires employers to provide contraception and abortion services to those who want them. Lori made it clear, though, that the bishops support general health care for everyone.

Lori appears to be girding, too, for a direct confrontation with Maryland’s Catholic governor, Martin O’Malley (D) over the issue of same-sex marriage which will be on the ballot in November. O’Malley has made gay marriage his signature issue and is actively raising funds to promote its passage on referendum. Polls show that more Marylanders favor its passage than not and support for the measure is steadily growing. Lori and O’Malley have exchanged pointed remarks in the press.

The enmity that is developing as a result of the Vatican’s dictates and the follow-through of the bishops can have lasting but unintended effects. Fewer and fewer Catholics are attending mass on a regular basis. The continued activities of the bishops could further chill the relationship between Catholics and their church or, more precisely, the clergy.

What’s more, in heavily Catholic state such as Maryland, the Archdiocese of Baltimore maintains a strong lobbying presence in the State House on a variety of issues, religious as well as social. The hammer-hand of the archdiocese could convince many legislators in the liberal General Assembly, especially non-Catholics, to reject their appeals for help in many causes, no matter how desirable. Catholics love their church but are increasingly wary of its authority. More often than not, the bishops and cardinals forget how they got their red hats.