John McCain and Cornel West Should Just Shut Up 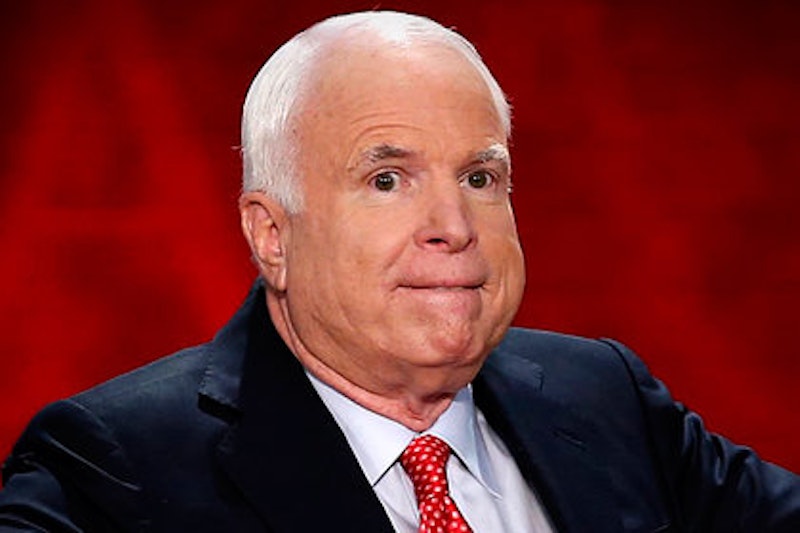 Washington got a little quieter last week. And it’s not only because Congress went home for the midterm elections. The silence is also because America went to war, if not with boots on the ground then this time with sneakers in the sand, and Sen. John McCain (R-AZ) finally shut up. And that means McCain’s sidekick, Sen. Lindsey Graham (R-SC) also lost his voice.

Now, shut up is a demeaning phrase, uncivil and forbidden in most genteel households because children should never be subjected to that kind of abusive talk and adults who use the words on each other display poor communications skills as well as a lack of wit and vocabulary. Be quiet is more acceptable in polite company but shut up is where appropriate words meet the demanding occasion.

There are a least a half dozen people, if not several million more, who ought to just plain shut up, McCain among them, along with Dick Cheney, Sheriff Joe Arpaio, John Bolton, Cornel West and Jesse Jackson, to name a few. They not only make fools of themselves but one of these days might flip a circuit on the high definition, wide screen TV. Rev. Al Sharpton would normally be on the list but he’s become acceptable since he landed his own cable show and toned down the Tawana Brawley nonsense. The bunch of them is always wrong, so why would anyone want to listen?

Suspend the niceties and platitudes about the First Amendment. This is about ear drums and not Constitutional rights. For implicit in the right of free speech is the perfectly legitimate prerogative to demand silence. In other words, shut up already.

John McCain tops the list of people who ought to shut up because he’s so available and on-call to TV bookers and a regular prop on Sunday talk shows. McCain is America’s premiere hawk, born and bred to make war, the son of an admiral and himself a Naval Academy graduate. He never made it to commander in-chief, though he tried twice.

Thus, McCain was denied the official authority to launch the troops and push the red button, except for his single vote in the U.S. Senate and his ubiquitous presence. Be thankful that his voice is not the thunder’s mouth, to roughly paraphrase Shakespeare, because then nukes would be raining down on the Middle East instead of Tomahawk missiles. Despite McCain’s protestations, he really doesn’t know better than the President and the entire military and intelligence communities. He merely thinks he does, so he declares war with his mouth.

Perhaps mistakenly placed second behind McCain instead of first is Dick Cheney, former vice president, Congressman, White House staffer, secretary of defense and rainmaker at Halliburton, whose profits derive from the plunder of war. Cheney, the second Bush Administration’s neo-con in residence, plotted, planned, schemed and armed the (first) war in Iraq and left the execution to his buddy at defense, Donald Rumsfeld and his merry band of “shock and awe” ideologues. Cheney had five deferments from military service.

After that documented failure of lies and incompetence that produced the de-stabilization of the Middle East that led to the current crisis, Cheney still won’t shut up even though nobody’s paying attention. Most recently, Cheney declaimed that Barack Obama is “the worst president we’ve ever had.” Say what, Mr. Second Banana to George W. Bush?

Comes now in the parade of gum-flappers the comically amusing but thoroughly buffoonish Cornel West who’s suffering from a serious case of telephone envy. Obama is chummy with Sharpton but never calls West for advice. Thus we get: “He [Obama] passed as a progressive and turned out to be a counterfeit. We ended up with a Wall Street presidency, a drone presidency.” To wit: West described Obama as a “brown-faced Clinton,” and a “black mascot of Wall Street oligarchs,” and Sharpton as “a cheerleader for Obama.” Talk about being jilted!

West is another ubiquitous face on cable TV, as if anyone can decode what he’s saying. He has a string of alphabet soup trailing his name, including a PhD, and has been a student and professor at Princeton, Harvard and Yale, and now professes at Union Theological Seminary in New York where he preaches what he learned at Yale Divinity School.

West is honorary chairman of “Democratic Socialists of America” and describes himself as a “non-Marxist socialist.” He was fired from Harvard by the imperious Lawrence Summers, when he was president, in a dust-up over missing classes, grade inflation and investing too much time on commercial projects. To wit: West has made hip-hop recordings, appeared in two Matrix films and was featured in the TV sitcom 30 Rock. Enough, already. Just shut up and go away.

Sheriff Joe Arpaio is one tough dude, or so he’d like people to think. He squints behind tinted glasses, wears about a seven-and-a-half gallon hat, a bolo tie and to top off the Arizona tough-as-cactus look a rodeo-style belt buckle. His favorite targets are Obama, whose birth certificate he claims is a fraud, and immigrants who can’t fight back. The featherheads at Fox News love Sheriff Joe because they like to act tough, too.

Sheriff Joe boasts that he does 200 television interviews a month. He also has a rap sheet longer than those of any of his inmates: He’s been found guilty of racial profiling and his jails have twice been ruled unconstitutional. The Department of Justice has accused Arpaio of the “worst pattern of racial profiling in U.S. history.”

He has set up a tent city to house prisoners in the Arizona desert where the temperature reaches 145 degrees which he calls a “concentration camp,” he has established “chain gangs,” even for women, and he has recruited armed citizen posses to help turn back the flow of immigrants.

All the TV attention and publicity has turned a profit for Sheriff Joe: He has a line of merchandise that includes shower curtains, maternity shirts, sweatshirts and hoodies, mugs, t-shirts and tank tops and baby onesies. America loves entrepreneurs. So take the money a run—as far and as fast as you can. And please, shut up.

John Bolton is another neo-conservative who suffers from logorrhea. As a Fox News contributor, he’s never met a microphone he didn’t like. Bolton’s walrus mustache gives him the appearance of a slender Mr. Whipple squeezing the Charmin’ toilet tissue. Nobody paid attention to him when he was U.N ambassador so why should they listen now?

The irony of his ambassadorship is that he hated the U.N., so much so that his caustic criticism of the institution cost him a permanent appointment and forced his eventual resignation. Republicans on the Senate Foreign Relations Committee sent his appointment to the floor with “no recommendation” and President George W. Bush was forced to declare Bolton a recess appointment. When Bolton’s sell-by date expired, he resigned for lack of enough support for confirmation to a full appointment.

Now he’s back as a talker with nothing to say but the usual cold war thunder and a former diplomat who sees “diplomacy as weakness and indecisiveness.” Why talk when war will do. Bolton was another shrill voice for the war in Iraq who sent thousands of Americans to their death but who dodged the war in Vietnam because “I had no desire to die in a Southeast Asian rice paddy.” Nice guy and true patriot. If Bolton has no will to fight a war he has no moral right to advocate one. So just shut up.

Jesse Jackson did shut up for a while when the news broke of his illicit affair and again when his son and namesake was caught living high on the heifer. But the pity of Jackson is that he has been eclipsed by that other charlatan, Al Sharpton, as the go-to black in times of community crises and wherever there’s a microphone or a TV satellite truck. Besides, Jackson has gained enough weight to resemble the “before” in a Weight Watchers ad; Sharpton has shed pounds, has a steady TV gig and a new updated wardrobe.

Jackson used to be fun to listen to, kind of the balladeer of the misbegotten with those street cadences, internal rhymes and tonal inflections of the ‘hood. These days it’s tough to understand what the hell he’s talking about because he’s lost the rhythm of the times as if he’s stuck in the 1980s and he’s another castaway black that Obama has no use for because Jackson doesn’t have his own big-bucks TV show like Sharpton does or that National Action Network that Sharpton uses to shakedown corporate contributors. Jackson used to do that, too, for his Rainbow Coalition, but his corporate sponsors caught on.

It’s tough to tell an old warhorse like Jackson to shut up because he has served a useful purpose. He’s a victim of the times as well as of age. So to be charitable, just tone it down, Jesse, and avoid the camera whenever possible. It magnifies girth.

Ann Coulter, persnickety author and Fox News diva, should shut up because her attention-getting shtick conceals what is believed to be a smart woman. Matt Drudge gets a temporary bye because his is the only website that is consistently and unintentionally humorous. Geraldo? Forget him. Nobody even knows he’s around anymore. Sean Hannity should definitely shut up because every time he opens his mouth he removes any doubt about what a mountebank he really is. And Sen. Ted Cruz (R-TX), the reigning speed bump in the U.S. Senate, is on reserve for another installment lest this becomes a shaggy dog story.

The list is endless but readers’ attention is not: Rep. Darrell Issa (R-CA), whose relentless Congressional publicity machine was skewered in Mark Leibovich’s lethal best seller, This Town, should shut up because one of these days Rep. Elijah Cummings (D-MD) will shut him up; Ralph Nader, the aging consumer crusader who sold out long ago and now has one foot in the commonweal and the other in corporate America; Sarah Palin, who should stick to skinning moose and filleting salmon; Rep. Steve King (R-IA), living proof that in America anyone can become anything, should definitely shut up; and Rep. Louie Gohmert (R-TX), who should submit to an anthropological study of his skull to determine whether he has a measurable IQ; etc. Anyway, you get the picture.