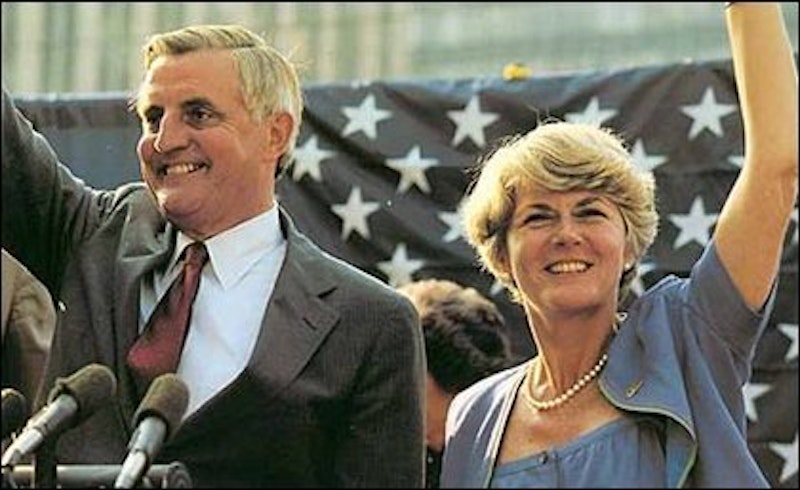 I liked Walter Mondale. Admittedly, I was barely in my tweens when he ran against Ronald Reagan in 1984. But I was already a liberal Democrat, and thought Mondale was refreshingly honest (even at 13, I knew that was a rarity in a politician.) I liked that he said he'd raise taxes. I thought then (and think now) that we needed a much stronger social safety net. Higher taxes were a necessity if that was going to happen; why not say so?

As it turned out, saying you're going to raise taxes is not what the American electorate wants to hear.  Mondale got crushed 58.8 percent to 40.6 percent; he won only the District of Columbia and his home state of Minnesota. It was a legendarily brutal landslide, and proved that given the choice between truth and falsehood, the American people prefer lies.

Or possibly it proved no such thing. Political scientists who have analyzed election results found, based on economic indicators, incumbency, peace, and relative moderation, Mondale actually did slightly better in 1984 than he should have. Nobody was going to beat Reagan in 1984, but Mondale did fine given a booming economy. The real lesson of the campaign might be that every candidate should say honestly that they're going to raise taxes. It didn't hurt, and maybe it helped.

Earlier this week I made a similar argument about Michael Dukakis. He did about as well as could be expected; he didn't run a particularly horrible campaign—and moreover, campaigns in presidential elections just don't tend to matter that much.

People who follow politics closely—like Matt Bai, who thinks Gary Hart could’ve defeated George Bush in 1988—have trouble understanding this. They follow the daily ups and downs, the scandals and the ads. Donna Rice and Monkey Business, Willie Horton and raising taxes, Reagan's smile and Mondale's honesty—you write stories about that stuff day after day, you analyze it, you discuss it, you weigh and you balance.  After all that effort, and all that punditry, it has to matter.

But the vast majority of people in the United States aren't pundits, and don't follow presidential elections that closely. They didn't see the Willie Horton ad, or if they did, they didn't think about it very much. They didn't know that Mondale said he was going to raise taxes; they couldn't tell you who Donna Rice was, or pick Gary Hart out of a line-up. People who don’t care about politics decide presidential races. They care about whether they're doing okay economically; they care, a bit, about the incumbent, who they know and have some vague sense of, positive or negative. They tend to have a partisan affiliation, and they vote with little regard to the particular individual whose name is by the D or R. Rainy days shift the presidential election more than anything a challenger is likely to do. Losing candidates—Mondale, Dukakis, Mitt Romney—are always seen as fools and losers by pundits. But individual candidates rarely have a huge effect on presidential outcomes. Based on political science models, Mondale, Dukakis, and Romney were all perfectly decent candidates. The fundamentals were just against them.

The specifics of campaigns don't affect voters, who mostly don't think about them. But they can affect people who do think about them —which includes not only pundits, but also politicians themselves. Politicians think more like pundits than like voters; they watch campaigns carefully, and therefore think that all the ups and downs matter. Mondale said he'd raise taxes; he lost. Politicians saw that and said, hey, I'm not going to say I'll raise taxes. It’s likely that Mondale's defeat encouraged politicians to avoid talk of raising taxes, and perhaps contributed to politicians’ ongoing reluctance to raise taxes, even though taxing the rich in particular has long been a popular policy according to polls. It's a kind of self-hypnosis; Mondale's tax gaffe was a gaffe because (some few) people thought it was a gaffe, and it became important because (some few) people said it was important. It didn't affect voters, though, and Mondale's honesty wasn't poor strategy on his part. On the contrary, in retrospect he showed that voters are more open to honesty than you would suspect—or at least, that they pay no more attention to honesty than they do to lies.