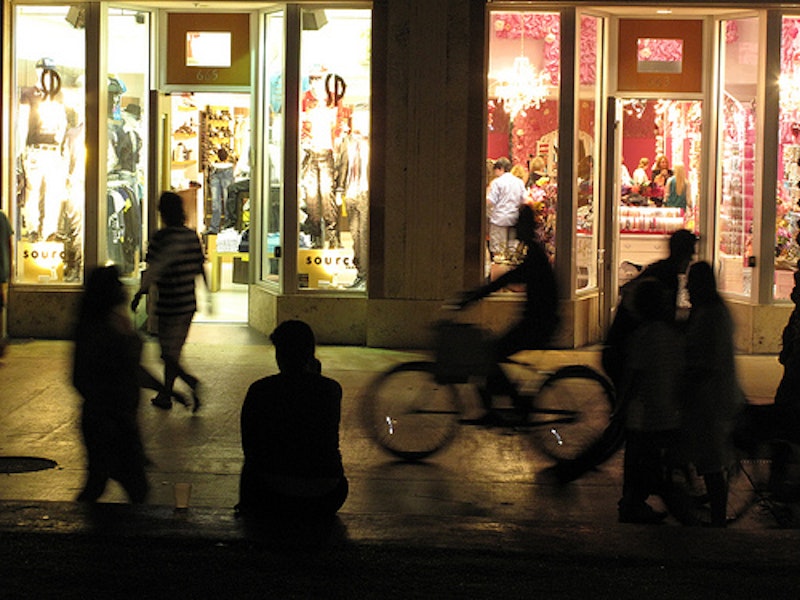 Walking in an area where you’re one of very few black folks is an odd tightrope act, an exercise in multiple perspectives, and the level of complication increases accordingly depending on whether you are behind or in front of a non-white pedestrian, or approaching one as he or she approaches you. There’s also the time of day to consider. There’s always the lingering feeling that you shouldn’t even be there, that by so being you’re infringing upon a world that isn’t yours; there is always a bifurcated view of self from within and without alike, a precise weighing of one’s own posture, pace, and mien. It is very, very difficult to just be some guy walking down a random street, mind tripping through the clouds, without a care in the world.

Under certain circumstances, to walk while black is to be aware that by the very act of walking, you’re terrifying some folks, scaring the shit out of them. It is to be unwittingly pressed, often, into accidental service as some sort of intra-racial ambassador. It is to cough up small talk in passing with adults and young adults, the grown or somewhat-grown, who are reasonably fluent enough in the fine art of effervescent small-town repartee to acknowledge your existence without acting like you’re going to mug them—and are unlikely to peer over their shoulders until you disappear around the next corner or over the next hill. It is to brush off the impression of being an object of quiet fascination for many. It is to alter your walking route because you don’t want high school or college girls to think you’re stalking them, even though it happened that everyone was traveling in the same direction, or because you want to cross to the other side of street before they can do the same, forestalling any rejection of common space.

It is to compliment leashed canines, or to opt out, in advance, of any compulsion to make eye contact with strangers who already laboring to convince themselves that you’re just not there. It has, in my personal experience, nothing to do with police—the cops have been cool, actually—and everything to do with a still-extant racial awkwardness. And the discomfort described is hardly a constant drumbeat; there are souls I encounter on the sidewalks and side streets whose welcoming, radiant positivity is so color-blind that the Invisible Man-exoskeleton falls away. I can remember every one of their faces, and their smiles, and how the crossing of paths improved or heightened an afternoon, somehow. Problem is, they’re the minority.