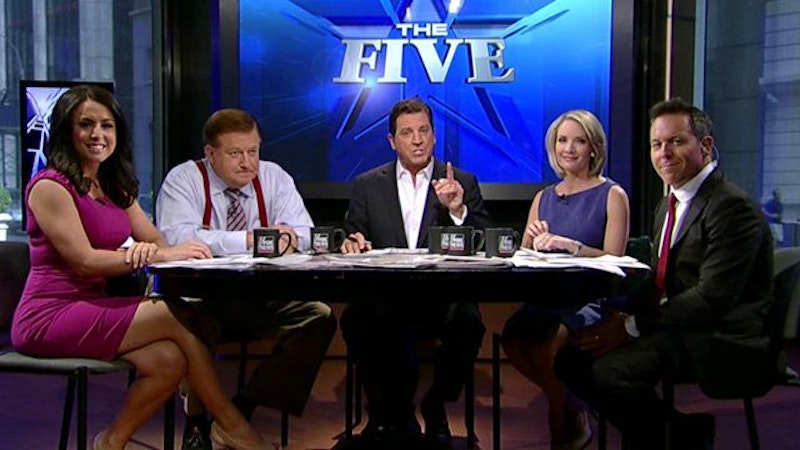 When Fox News aired the story of the United Arab Emirates (UAE) first female fighter pilot, Major Miriam al-Mansouri, leading a charge against ISIS in an F-16, Kimberly Guilfoyle was enthusiastic. She took clear delight that a terrorist organization known for its brutality toward women was under assault by a brave and learned woman, noting that even in more amicable Arab nations, women still can’t drive. Guilfoyle clearly saw this as a great step forward for women. She’d just barely finished when colleague Greg Gutfeld commented, “The problem is after she bombed it she couldn’t park it.” Fellow talking Eric Bolling threw down, “Would that be considered boobs on the ground, or no?” The clip ends with an exasperated Guilfoyle, head in hand, “Why did you have to ruin this? Why did you have to ruin my thing?”

As the clip went viral, thanks mostly to women’s outrage, the inevitable response from a lot of commenters was that the women of the world need to lighten up and learn how to take a joke. I prefer a more Shakespearean approach. In King Lear, there is the famous line, “In jest, there is truth.” So I’d like to examine the truths laid out in Gutfeld and Bolling’s jests.

With Gutfeld’s remark about parking the plane, he’s outing himself as the sort of guy who is still surprised to discover that women can be competent at manly jobs. And let’s face it, being a fighter pilot is super-duper manly.

It’s a fact that being a fighter pilot is more physically demanding than most civilians think it is. They must be in excellent cardiovascular shape to adapt to the rapid changes in gravitational force, as well as have a strong core for performing anti-gravitational straining maneuvers. It’s probably safe to assume that, like the US, the UAE has extensive training and testing of their pilots. So if al-Mansouri wasn’t qualified to be in that cockpit she wouldn’t be there. Gutfeld’s joke about parking seems to imply that through the magic of manhood, anything a woman can do, he can do better. Since he and Bolling have never served in any branch of the military, their smugness is pretty rich. And also insulting to those who have, prompting former soldier and current blogger Charles Clymer to quip on his Facebook page, “New rule: if you’re a man who never had the bravery to serve your country, you don’t get to have an opinion on women in the military.”

Bolling’s joke tells us that he cannot see the world past his boner, and that he probably divides women into “doable” and “not doable.” When guys say things like this, what I hear is, “No matter what women accomplish, being a hot chick will always be more important.” A line like this is the expression of a man who can’t understand that women aren’t as obsessed with his dick as he is. Referring to a military woman as “boobs on the ground” takes a turn for the sinister if you think about it too much (and I did). A common nickname for women within the military is “walking mattresses.” Couple that with military’s high rate of sexual violence within the ranks, and suddenly a dumb joke is menacing. To be clear, I don’t believe that Bolling himself was condoning, threatening or defending any acts of sexual violence against women. But the truth in this kind of humor is that when guys see women as just boobs or vaginas, and less like people, it makes it easier for them to treat women like crap.

Guilfoyle is an accomplished attorney, and more highly educated than both Gutfeld and Bolling. When a story like this breaks, particularly when the achieving woman is from a place notoriously hostile to women bucking tradition, both conservative women like Guilfoyle and lefties like myself get excited. Al-Mansouri’s accomplishment means that girls can dream a little bigger, and women can see their hard work paying off to make those dreams come true.

The truth in these jests is that Gutfeld and Bolling are silly, childish men. They had to ruin Guilfoyle’s thing with silly, childish jokes because if women are competent, self-sufficient, and indifferent to their boners, where does that leave them? A sad clown and a past-prime jock learning to make their own sandwiches.