Jimmy Carter altogether too smug about own legacy 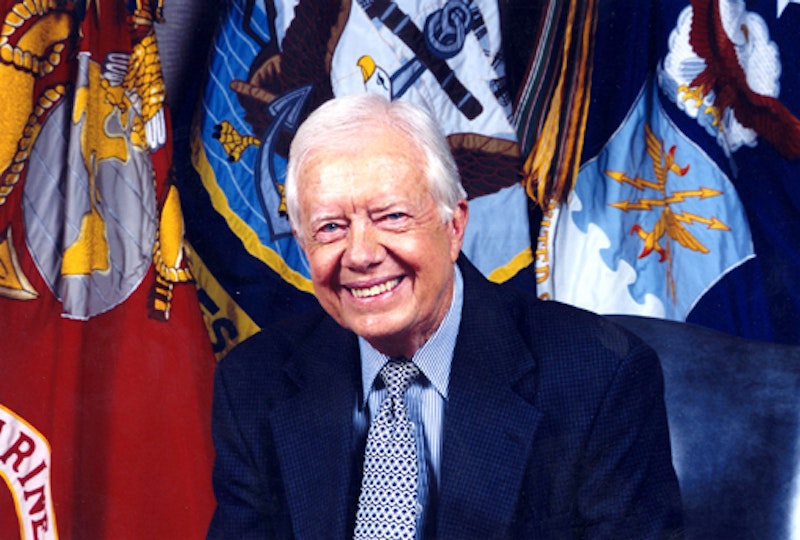 Even when I was a kid, Jimmy Carter struck me as a cornball. The toothy grin. The background as a peanut farmer. The Clampett-ish clan that seemed to follow him everywhere: Billy! Amy! Rosalynn! Miss Lillian! And in the wake of failures personal (the “Killer Rabbit” incident, the jog-turned-near-heart-attack, and the ongoing foibles of brother Jethro Billy) and professional (the shameless revival of FDR’s “fireside chats,” the Iran hostage crisis, the infamous “malaise” speech—it didn’t take a lot to see the Ronald Reagan landslide coming from miles away.

But since his exit from the Oval Office in 1981, Carter’s worked assiduously on redeeming his public reputation, as practically no former U.S. President has done before. (Since 1900, his only real competition in this area has been William Howard Taft, who went from ex-president to Chief Justice of the Supreme Court, and Richard Nixon.) His Habitat for Humanity-allied work building houses for the poor (both here and in Vietnam) has steadily led to ever-greater achievements, up to and including the 2002 Nobel Peace Prize and, just last month, successfully negotiating the release of an imprisoned American from North Korea.

This being America, a lot of ink has been spilled over the past few years reassessing the Carter presidency. While having signed the SALT II treaty with the USSR isn’t something that’s going to resound with most people today, his work on the Camp David Accords was truly groundbreaking, and even the “malaise” speech (in which that word never appears) is now seen by a growing number of people as a shrewd, if ultimately too-risky, gambit (as examined in Kevin Mattson’s excellent 2009 book What the Heck Are You Up To, Mr. President?

All well and good, but Carter is, as might be expected of anyone who ran for—and was elected—President, no stranger to hubris. The now 85-year-old one-termer is in the midst of one last great campaign to rehabilitate his image, and the results so far have made even his staunchest defenders uneasy.

Currently touting his new book, White House Diary, Carter first made waves when he told 60 Minutes that Ted Kennedy had essentially killed health-care reform during the Carter presidency. There was famously no love lost between the two politicians, and Kennedy certainly had more than his share of shortcomings, but speaking ill of the recently deceased is rarely a winning strategy.

But Carter wasn’t done there. He later informed NBC’s Brian Williams, “I feel that my role as a former president is probably superior to that of other presidents,” adding, “The Carter Center has decided, under my leadership, to fill the vacuums in the world. When the United States won’t deal with troubled areas, we go there and we meet their leaders who can bring an end to a conflict, or an end to human rights abuse, and so forth. So I feel that [I] have an advantage over many other former presidents in being involved in daily affairs that have shaped the policies of our nation and the world.”

This is all remarkably tone deaf for someone who’s spent most of his adult life on the national stage as a politician. It’s hard to conceive of a Bush or Reagan—or even a Clinton—making these kinds of remarks, at least in a public forum. (Carter later amended his “Am I not great?” remarks by issuing a written statement that said, “What I meant was, for 27 years the Carter Center has provided me with superior opportunities to do good.”)

Jimmy Carter is still a cornball, though one with a bug up his ass when it comes to his legacy. His brand of good works—with news cameras and microphones in tow—can rub the wrong way, and his seemingly frequent inability to think before he talks can be awe-inspiring, in a kind of “Ralph Nader is running again?” way.

The potshots at dead rivals, the Nobel, and publishing any number of self-justifying books may never change the popular impression that Carter’s was a failed presidency. But it is entertaining. Not quite ready for Crazy Old Coot-hood, Carter’s frank talk is refreshing in this age of careful-they-might-hear-you caution. And if he’s got a big head, so what? He’s not running for anything beyond “not so bad after all” status, and that’s certainly something any of us would want for ourselves.