The Insanity of Christine O'Donnell

Making a mockery of political representation. 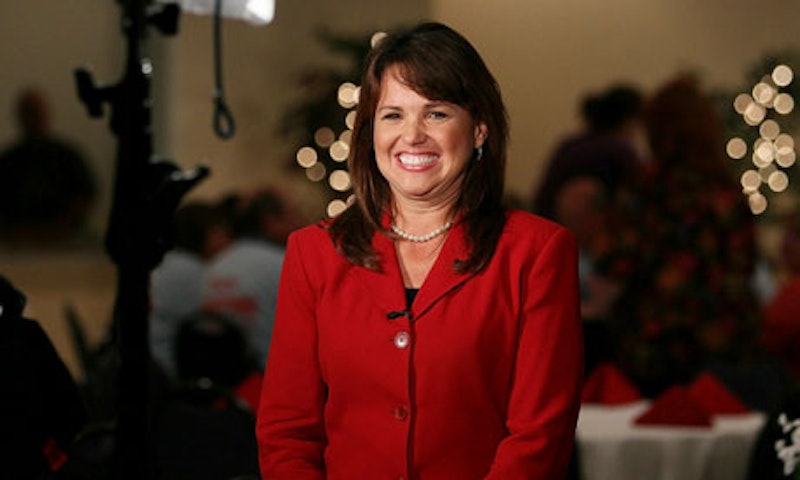 As if it were needed, more proof today that Delaware Republican Senate candidate Christine O’Donnell is functioning on a Forrest Gump-level IQ at best. Video from a November 15, 2007 Bill O’Reilly appearance in which O’Donnell is ostensibly there to debate the ethics of stem-cell research but instead awkwardly lambasts American scientists for human cloning—which if you believe O’Donnell will be all the rage in the near future, if it’s not happening already.

Around the 4:10 mark, O’Donnell says the following: "American scientific companies are cross-breeding humans and animals and coming up with mice with fully functioning human brains."

There’s a sort of Lewis Black “If it weren’t for my horse, I wouldn’t have spent that year in college” batshit insanity to that statement, so please don’t think about it too hard (unless you’re trying to have an aneurism).

Thankfully O’Donnell, as a former spokeswoman for Concerned Women for America (a group dedicated to returning women to the kitchen, as far as I can tell) and founder of The Savior’s Alliance for Lifting the Truth (The SALT), was a favorite on Real Time With Bill Maher throughout the 90s and early 00s. Maher is taking a kind of sadistic pleasure, I think, in slowly leaking the most embarrassing O’Donnell clips: her confession that she “dabbled in witchcraft” and that one of her first dates “was on a Satanic altar” among the most “nutty,” as Karl Rove would put it.

Throw in the financial improprieties, the fact that she didn’t receive her B.A. until last month, the MTV anti-masturbation ad, and all the stuff about her Democratic opponents following her around and hiding in her bushes, and she’s no doubt the easiest political punching bag of the last decade: Even her political mentor Sarah Palin doesn’t approach O’Donnell’s level of dumbassery.

And in case you’re wondering just how much more fucked up this could get, check out Stephen Colbert’s Christine O’Donnell Clip Predictor 3000.