Staring Down the Double Barrel

Is it possible to address chronic unemployment and long-term national debt at the same time? 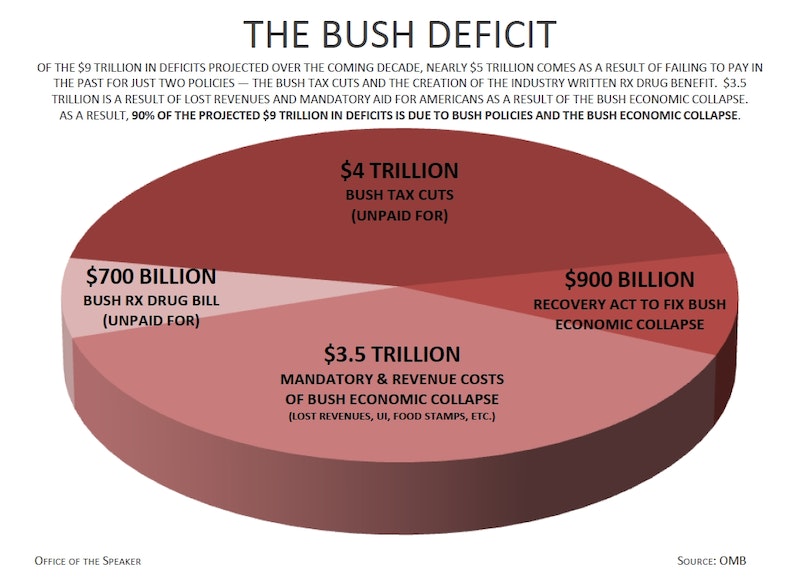 “You need to understand that in my opinion Obamacare will ruin the best health care system in the world and it will bankrupt our country.”

If House Minority Leader John Boehner is to be believed, America stands at the edge of a precipice as dangerous as the financial crash of 2008 or, heaven forefend, the Great Depression. A bankrupt America, stooped with hat and hand, a fallen giant on the global stage.

What I have said repeatedly is we need to control spending in Washington, D.C. We need to remove the uncertainty that clouds our economy from all these new policies and programs being enacted by this Congress. And we need to provide certainty in terms of what the tax rates are going to be. And I believe that extending all the current tax rates would be a very good sign to the private sector that we expect to create jobs in our country.

According to an August mid-session update (pdf) from the Congressional Budget Office, Boehner’s not entirely wrong on America’s fiscal precariousness, but he’s slightly mixed up as to the cause. The report predicts that if the Bush tax cuts are extended—along with exempting millions from the Alternative Minimum Tax—we’d see somewhere between 0.6 percent and 1.7 percent growth while knocking down the unemployment by almost a full percentage point in a year and a half. Not the kind of numbers to start calling this time of the year Recovery Autumn, but the prospect of lower unemployment is a compelling one.

But the tax cuts aren’t cheap; with a $2 trillion price tag, Congress can't just rinse and repeat the fact that the tax cuts weren’t paid for to begin with—a near disastrous consequence of an Administration that talked a big conservative game while expanding the Federal government, the deficit and the national debt to unprecedented levels. Congress is going to have to cut more than just fat if it wants to address the deficit and long-term debt in a serious manner. It’s what their talking points say they’re serious about, and yet here we are. It’s a serious question of tax and economic policy treated—as is everything else—with hack talking points and the overwhelming feeling that legislators believe the American people to be barely capable of balancing a checkbook.

But these tax cuts would indeed spur a little growth and put a not-insignificant number of people back to work. That’s not something to ignore; what also can’t be ignored, though, is that by 2020 we’ll be looking at a deficit that would stand at eight percent of GDP, a near unsustainable level.

The other end of the logistical spectrum—letting all the tax cuts expire—would up the torpor of a sluggish economy. Howard Gleckman, of the Tax Policy Center, sums it up:

If we let all the Bush tax cuts expire, allow stimulus to come to an end, and permit domestic spending to grow only fast enough to keep up with inflation, we can bring the federal deficit down to 4.2 percent of Gross Domestic Product in 2012, less than half of this year’s 9.1 percent. Once the economy recovers, deficits would settle in at manageable levels of between 2.5 percent and 3 percent from 2014 to 2020. This scenario, which effectively extends current law, sounds pretty good if the deficit is your biggest worry.

Now, both extremes are just that: extremes. It can be as difficult to predict economic factors as with political climates, but the path in front of us is starting to look remarkably like two different approaches: unemployment or national debt. Not a single elected official has come within 100 miles of a spending plan that includes both debt reduction while paying for the Bush tax cuts.

In the middle, of course, is the popular plan to only let the tax cuts expire for those making more than $250,000 a year—Clinton-era tax levels, which included a now-mythical budget surplus.

Splitting the difference on the tax cuts won’t engender any more dissatisfaction than is already present. What it signals, though, is a calculated tightrope walk. The steps needed to get serious with unemployment don’t work well with long-term debt and vice versa.

But without any serious consideration of an appallingly bloated defense budget that includes two wars and thousands of Federal employees or entitlement reform that, for the most part, only includes misguided attempts to repeal the American Care and Recovery Act or, even worse, privatize Social Security, I fear the middle-of-the-road steps being taken now will only exacerbate each side of the fiscal situation. We are at a time when economic sacrifice is desperately needed, whether it’s tax cuts and stimulus spending to boost employment, or tough tax raises and spending cuts to get a hold of a soon-to-be-crippling amount of national debt. No one on either side has either the manners to ask the American public or the courage to lead it.