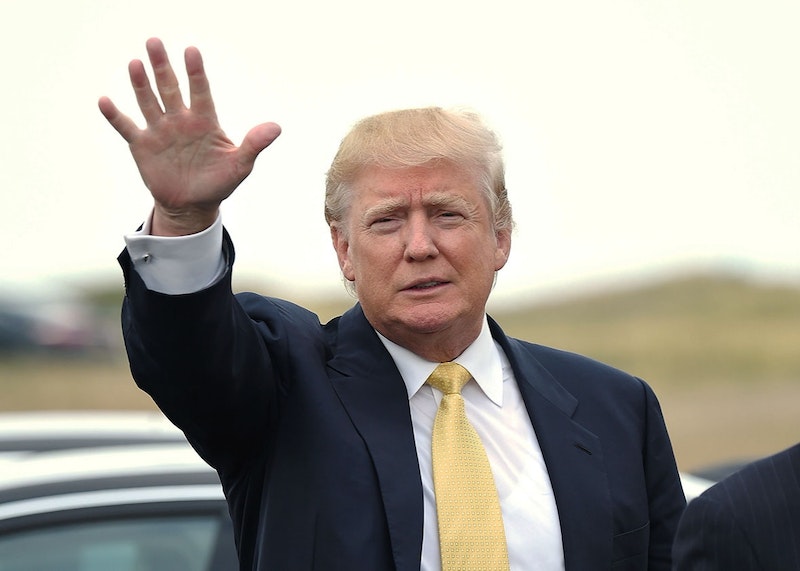 Donald Trump’s been likened to a fascist—as most modern politicians deserve to be, if you ask me. If labeling him that way helps to undermine his popularity, that’s fine, but remember the origin of the term “fascist” and the (short-term) strategic advantage it connotes. The ancient Roman symbol of bundled sticks implied greater strength through unity, certainty through the suppression of political dissenters.

But there is another way to bundle sticks: faggots.

“Faggots” are loose bundles of sticks such as those often carried in centuries past on the backs of peasants engaged in commercial or agricultural activities. Faggots better symbolize the sort of society most of us really want: engaged in trade and the maintenance of our homes, not constant military conquest and crushing of rebels. Faggots are undeniably, by definition, more loosely organized, a bit more haphazard. (And they come in various forms, including the longer “kidd faggot” sometimes hauled by burlier peasants.)

And so it is with the loose coalition of conservative and semi-libertarian interests represented by the unlucky 13 candidates up against the fascistic Trump in the Republican primaries. Make no mistake, I prefer these faggots to Trump—as does the party establishment, as do a majority of Republican voters, as no doubt would many general election voters. But faggots, by their very looseness and crude organization, face a collective action problem that a single, single-minded authoritarian like Trump does not: internal division.

There are a dozen people in this world who can stop Trump in his tracks right now, but to do so, they’d have to set aside the very self-interest and self-aggrandizement that drove them into politics. In short, if nearly all the other Republican candidates drop out, their extremely divided (and at this stage inattentive and almost randomized) voter blocs can rally behind one saner candidate.

(This collective action problem is admittedly the sort of thing leftists, with their songs of solidarity, delight in saying that individualistic free-marketeers are psychologically ill-equipped to handle. However, these tragic situations tend to arise primarily in the political arena, not in private life, which means it is really those, such as socialists, who want more of human life governed by collective action who are usually responsible for creating these dilemmas in the first place.)

We know most of these candidates will likely drop out after being annihilated in Iowa and New Hampshire come February, but they’d serve their party and nation now by realistically assessing their chances and exiting early, preventing Trump from further snowballing and gathering a further air of “momentum” and “inevitability.” Keep in mind, the press talks about Trump more than all the other GOP candidates combined, and most dimwitted voters are guided largely by mere name recognition when going to the voting booth, according to studies by political scientists. The longer the Trump brand stays out there opposed only by a vague, loose bundle of other obscure options—faggots—the greater the likelihood casual voters will pick him in spring primaries.

Make no mistake, the press would love this outcome and will do nothing to prevent it. They love two things: (1) ratings and (2) eventual Democratic victories, and the prominence of the Trump name all but guarantees both in a way that, say, Rand Paul or Ted Cruz’s names do not.

Speaking of Paul and Cruz, I admit that the candidate I most like among the Republicans, Paul, would appear to be one of those who should drop out if my advice were to be followed right now. If anti-Trump primary voters are to rally behind one or two non-Trump candidates, in fact, it might be wise for all 10 candidates currently in the single digits in polls to exit, which as I type this would whittle things down to just Trump, Carson, Rubio, and Cruz. Then let Carson and Rubio exit gracefully after Cruz wins Iowa in early February, if they insist on hanging around for a while.

Cruz is by no means a perfect outcome, but at least he’s not Trump (and he has some libertarian tendencies, which can’t really be said about any of the others aside from Paul). As those Straussians I wrote about in Friday’s column well know—and about this they are absolutely right—politics is never about perfection but about managing the chaos that we’re handed so that it leads to the least-awful outcomes, if we’re lucky and think strategically.

Right now, obviously, it’s likely that any Republican move still leads to four or eight years of President Clinton—or just maybe to a deranged President Trump discrediting the Republican Party for a generation. However, a brief, strategically necessary transformation from faggots to counter-fasces right now could make that a bit less likely. Band together and exit, Republican candidates.