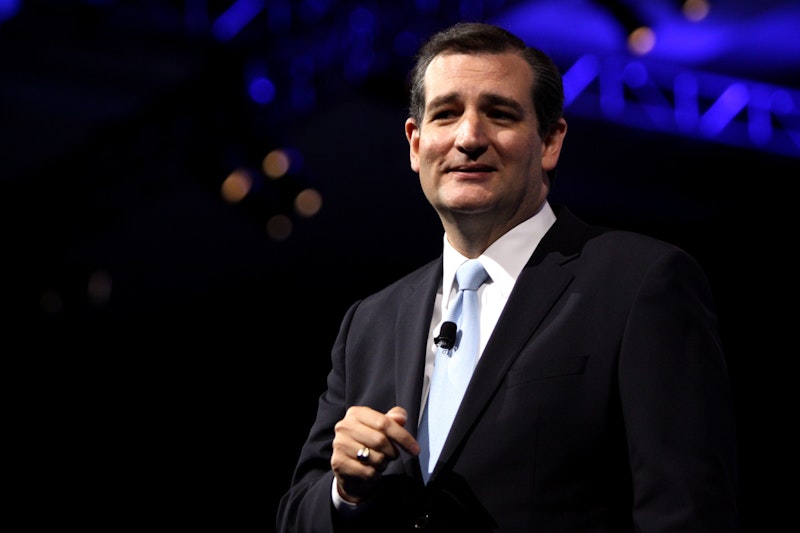 It's the end of Trump! Clinton campaign chairman John Podesta, declared that Cruz will be the Republican nominee. Some polls put Cruz ahead in Iowa. No more Trumpmentum; it's Cruzmentum through next November.

All the excitement is over in three new Iowa caucus polls; Monmouth had Cruz up by five points, Fox News by two, and a DMR/Bloomberg post that had him up by 10. The combined Cruz poll oomph has put him ahead in RCP’s aggregate by one point, and in Huffpost's by .2 percent.

A .2 percent lead, or even one percent one, isn't much on which to build a triumphant lead. Still, the new polls show how vulnerable Trump is—not so much because his support is eroding, as because they point out that his support in Iowa has always been erratic. Trump announced in mid-June. Scott Walker, however, retained his Iowa lead through the end of July. Trump then had a summer run from August through September. Ben Carson pulled ahead in October, and Trump took back the lead in November. Now Cruz has pulled ahead in December.

National polls have been more consistently Trumpish, which is where the notion of Trump's unassailability comes from. But in Iowa, we've had Trump-ups and Trump-downs for a while. Cruz's ascent seems to confirm that Iowa is a see-saw, rather than a flat plane of Trump dominance with the occasional non-Trump aberration.

Still, there's reason to think that Cruz has a better chance to build solid support on his surge than Carson… or for that matter Trump. Cruz has conventional qualifications for the president; he's a Senator. Despite his claims of outsider status, Cruz has been embedded in establishment Republican politics for his entire career. He worked for the Bush administration and in Texas government. He’s an insufferable asshole, and most of his colleagues in Congress loathe him. But he has party connections and support—he picked up three important Iowa endorsements recently, including that of conservative Iowa Rep. Steve King. If Cruz looks like he's going to win the nomination, Republicans aren't necessarily going to rise up as one to condemn him. Nor is he likely to start babbling about pyramids and grain, like the confused Ben Carson.

In fact, Cruz looks a lot like candidates who’ve won Iowa in the past. Former Iowa caucus winners Mike Huckabee (2008) and Rick Santorum (2012) were both socially conservative Republicans with establishment bona fides and lots of evangelical support. Huckabee and Santorum didn't manage to translate Iowa wins into national victories; they both quickly succumbed to more moderate opponents (McCain and Romney respectively.) That could easily happen to Cruz too. But the flurry of excitement around his poll numbers is good news for him in the short term. More media coverage means more people in Iowa will learn about him, and since he's the sort of candidate Iowans have voted for in the past, the increased attention is likely to benefit him further, both in grassroots support and in further enthusiasm from conservative and evangelical leaders.

There's been media discussion about the fact that Trump's poll numbers haven't plummeted, even after he declared that the U.S. should ban all Muslim immigrants. What's important, though, is that, despite the 24/7 media coverage, Trump's numbers haven't surged. Even with all the attention on Trump, some Iowa voters apparently have figured out who Cruz is. Trump may come out with a plan to put all non–white people in camps tomorrow. But he's still going to have a harder and harder time wresting the spotlight away from Cruz, and others, as the caucuses get closer.