Brown: An Arguing City on a Hill

Swim away from government. 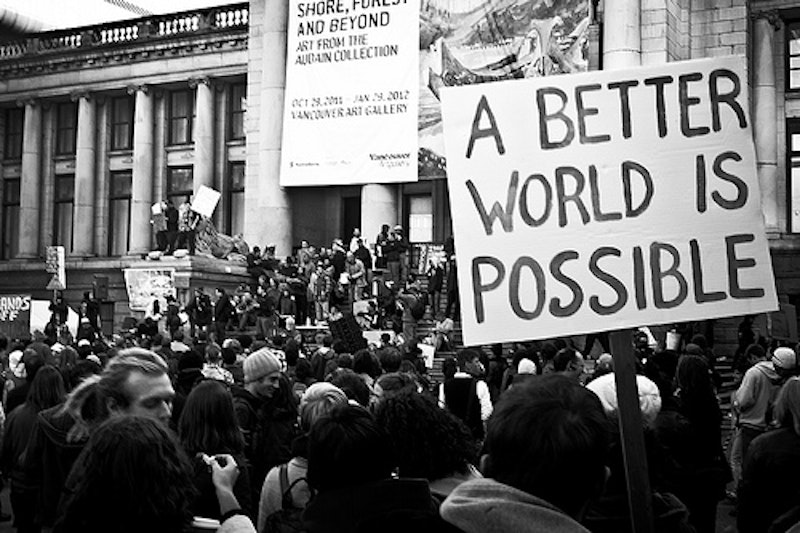 On the same night as that libertarian/anarchist debate I wrote about last week, John Tomasi, a more-or-less libertarian philosophy professor from my old stomping grounds, Brown University, gave a talk, mere blocks from the Epstein/Huemer debate, under the auspices of the Institute for Humane Studies.

Tomasi is a naturally diplomatic thinker concerned about the state of free speech and political debate on campus. He wants people to learn from each other and from different political traditions but can also end up at odds with some of the most p.c. folks at Brown, even without trying. It takes courage and skill to navigate the political waters of Brown sometimes.

He writes in his great book Free-Market Fairness that his moderate version of libertarianism is motivated partly by a desire to get along with more mainstream fellow philosophers. His work often involves teaching multiple competing political theories to incoming freshmen or organizing on-campus debates between wildly differing thinkers. Philosophy, even political philosophy, should be characterized by civil discourse with truth-seeking colleagues, after all, not by hunkering down and hating the enemy.

This can sometimes put him at odds with more radical libertarians not so unlike me. In a speech I saw seven years ago, he dismissed the anarcho-capitalist option—abolishing government completely—with the brief observation that “almost no one believes that.” For good or ill, he doesn’t really want to be a loner radical. As recently as this year, he quietly abandoned the belief in the right to inherit property, based on left-wing criticisms of his book in the pages of Critical Review.

That will outrage some, but a willingness to compromise, sometimes quite strategically, is often a necessary part of keeping the larger dialogue going. He argues that political philosophy is a bit like a river with two banks. On one side, everyone from limited-government constitutionalists to social democrats, socialists, and theocrats debates how best to structure the state. On the other side of the river sit the lonely anarcho-capitalists, who he urges to swim over to the opposite bank and join the main debate.

It’s temping, obviously, though if you know how much deadly havoc and economic waste the state wreaks, the goal, I would argue, should be to get everyone to swim over to the anarcho-capitalists’ bank. It’s certainly going to be embarrassing if we win and you have to explain what you were doing on the other side of the river.

Common ground, as that most influential of philosophers, Aristotle, taught us, is a good place to start a debate, especially on something as apt to evoke passion, anger, and violence as politics. But if the common ground is, well, in the middle of a river, so to speak, it might be both moral and practical to tell people to position themselves well away from the myriad evils on that statist opposite shore.

I mean, look at it over there—the wars, the taxes, the regulations, the endless arguments and misguided sanctimony. Is that where you want to live? We’ve all been living there for thousands of years already, really. Let’s move. That would be the nice improvement in living conditions for the human race. In the meantime, though, it’s inspiring to see Tomasi making Brown a bit more habitable.