Is Mark Zuckerberg Being Bamboozled?

The Face of Facebook, lassoed by Bill Gates, has promised to give away the bulk of his fortune to charity. 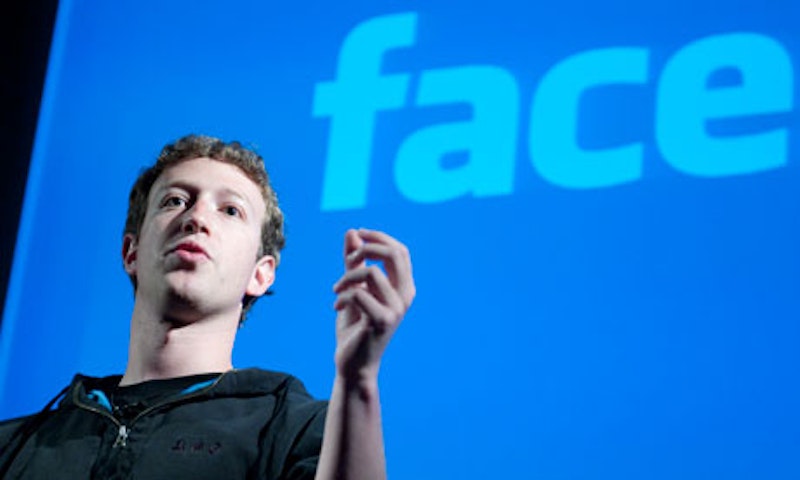 As the holiday season ramps up, one’s natural impulse is to put cynicism in the back pocket until after the new year begins, but the news that Facebook billionaire Mark Zuckerberg has pledged to give away the majority of his wealth to charity strikes me as a little fishy. The Wall Street Journal reported on Dec. 9 hat celebrity philanthropists Bill Gates and Warren Buffett—who profess a disdain for inherited wealth—have snagged the 26-year-old Zuckerberg, in addition to 15 other billionaires, as a signatory to their “Giving Pledge” campaign.

According to the Journal, “The pledge doesn’t ask for specific donations, nor does it track giving; rather, it asks that a pledge maker commit [publicly] to giving away the majority of their wealth.” Steve Case, co-founder of AOL, another convert, said, “It is less about the size of a check that you write and more about the outcome.” So, perhaps Case will donate $1000 to his local battered women’s shelter and still reap the publicity of joining Gates as one of the premier 21st century philanthropists. That’s cranky speculation, obviously, for I’ve no idea what Case’s intentions are, but doesn’t a no-strings proclamation to give away the bulk of your fortune strike you as hollow? Sort of like snorting a quantity of cocaine and telling your dealer that the check’s in the mail.

In Zuckerberg’s case, talk about peer pressure! Just a few months ago, right before the film about Facebook—The Social Network—was released, Zuckerberg appeared on Oprah (where else?) to announce his $100 million pledge to the Newark public school system. The youngster didn’t really get the bang for his buck since the gesture was widely perceived as damage control to counteract the unflattering portrayal of him in the film. In The New York Times blog “Dealbook,” Michael J. De La Merced, writing after the Journal story was in print, was a bit jaunty in his post, noting that The Giving Pledge is “sometimes criticized as a publicity stunt” and that before the list of newly minted machers was released, it was a “parlor game” in the business community about exactly who would sign on with Gates and Buffett.

Certainly no one need feel sorry for Zuckerberg, an ingenious entrepreneur who’s amassed, according to Forbes, a $6.9 billion fortune—on paper, at least, since he hasn’t taken the company public—but you know that Gates must’ve really put the bite on him to join The Giving Pledge, as a representative of unselfish under-30 moguls. It’s not unreasonable to think that Zuckerberg, who has a longtime girlfriend, might feel differently about giving away most of his money in the likely case that he marries and has children in the coming years. Gates is a well-known advocate of an extraordinarily onerous estate tax. Of course, no one but his accountants and tax lawyers know how much of his fortune is tied up in trusts that enable an individual to dodge taxes upon his or her demise. As I’ve noted before, the family of The New York Times, whose paper is a fierce advocate of very high estate taxes, has managed over the years to circumvent huge payouts to the government when a family stockholder dies.

It could be that Zuckerberg, by all accounts a ruthless and creative businessman, is naïve when it comes to matters that are outside his field of expertise. Or, on the charitable side, so to speak, maybe he hasn’t shed all his youthful innocence and was dazzled by the example (and hypnotics) of Bill Gates. I’m expecting that any day now Bono will issue a public plea to Google co-founders Larry Page and Sergey Brin, and maybe Amazon’s Jeff Bezos, to join Zuckerberg in taking the plunge. Maybe this is a (very) high-end version of the pledge high school and college students take to remain chaste until marriage. And that was unassailably believable.