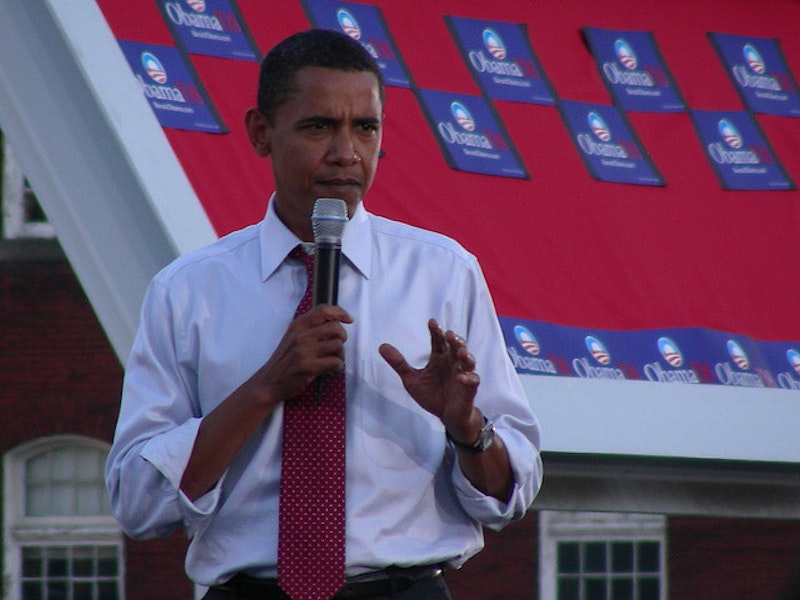 So, has Barack Obama found his juice again or is he pitiful roadkill, just like Jimmy Carter after his humiliating scuffle with that “killer rabbit” while on a boating trip in 1979? Beats me—while the “permanent campaign” is even more permanent in today’s scoop-via-Twitter media sewer, the President’s reelection campaign is still in the distance—but it was certainly entertaining last week to watch the Beltway experts try and make sense out of the tax deal.

On the plus side for Obama, his nasty pistol-whipping of left-wing “purists” was cunning, since they have nowhere else to go in the 2012 election. But he may have squandered that moment of uncharacteristic passion and candor a few days later when Bill Clinton was invited to the White House to hold a joint press conference with the President. Clearly out-flanked by the crass, insufferably narcissistic yet politically brilliant Clinton, Obama excused himself to attend a holiday party while his Democratic predecessor mesmerized an ever-gullible media gaggle and explained, as Obama really couldn’t, why the tax compromise was economically beneficial. Or at least, given the political circumstances, the best that could be expected for left-of-center Democrats. I can’t remember the last time a sitting president actually ceded the podium to a civilian. Granted, Clinton’s a civilian with benefits, as they say, but how mortifying that Obama slunk away to join his wife for a ceremonial meet & greet.

It’s a puzzle and if anyone in Washington pretends to understand what exactly Obama’s up to, he or she is either fibbing or filling column inches. The Washington Post’s conservative Charles Krauthammer claimed that Obama’s denunciation of his liberal critics as “sanctimonious” was his “Sister Souljah moment” (jeez, I guess everyone’s nostalgic for the 1990s), and that the tax compromise all but assures his reelection. “Not even Democrats are that stupid,” he wrote, dismissing the idea that Obama might be challenged, like Carter in 1980, in the Democratic primaries. “The remaining question is whether they are just stupid enough to not understand—and therefore vote down—the swindle of the year just pulled off by their own president.”

Meanwhile, Paul Krugman used his New York Times soapbox last Friday to argue that Obama made a losing bargain with the devil—the GOP—and will suffer the consequences less than two years from now. Krugman strained credulity by claiming he’s not one of the “purists” that Obama pissed on last week, as he noted that the President has released some Republican “hostages” while adding new ones. Here’s Krugman’s gloomy prediction for Obama: “While the bad stuff in the deal lasts for two years, the not-so-bad stuff expires at the end of 2011. This means we’re talking about a boost to growth next year—but growth in 2012 that would actually be slower than in the absence of the deal.” Translated, Obama got rolled and will become—on the iffy presumption that Republicans nominate a challenger who isn’t rabid—a one-term president.

I guess the Times’ resident economist/Nobel Prize recipient/perpetual irritant wasn’t satisfied that his message got across, for just three days later, Dec. 13, Krugman essentially re-wrote his previous column [http://www.nytimes.com/2010/12/13/opinion/13krugman.html?_r=1]. Maybe he was nostalgic for last week, since his conclusion about the tax deal was identical: “What I expect, however, is that we’ll be having this same conversation all over again in 2012, with unemployment still high and the economy suffering as the good parts of current deal go away. The White House may think it has struck a good bargain, but I believe it’s in for a rude shock.”

I can’t say all of this exactly makes my head hurt, for it’s cotton-candy political theater (the commentary, not the tax policy) that’ll soon be forgotten and not many people will keep score.

On the subject of scores, what I want to know is what rodent crawled up Thomas Boswell’s ass last week. The Washington Post’s decorated baseball columnist was in a dither over the Boston Red Sox signing the former Tampa Bay Rays’ Carl Crawford, the most dynamic position player free agent on the market this off-season. Contrary to nearly every other sportswriter’s analysis, Boswell wrote that the Sox got snookered, awarding Crawford a seven-year, $142 million contract while Jayson Werth—nabbed by Boswell’s hometown Nationals—was there for the taking. Boswell’s contention is that Crawford can’t hit in Fenway Park and will be neutralized by lefty pitchers, and the hits he does manage will be mostly singles. Sure thing, Tom: when Crawford bangs the Green Monster, he’ll be held to one base, just like David Ortiz. Citing Crawford’s career line of .275/.301/.406 at Fenway, Boswell writes, “There’s a name for speedy, weak-armed left fielders with those numbers. They’re called AAAA players. Or young prospects.”

Boswell does admit that Crawford’s an “excellent player,” which doesn’t jibe with the “AAAA”  slap, but believes Sox general manager Theo Epstein screwed up with the acquisition. I’m a Boston fan, but of the old-school worrywart variety who remembers too many bonehead management decisions in the past (the Sox were the last team to integrate) that occurred before John Henry bought the team in 2002. That said, it sure seems, with a little more tinkering in the bullpen department, the Sox—on paper—are the team to beat in 2011. With Crawford and Jacoby Ellsbury a double-threat on the basepaths, and new slugger Adrian Gonzales surrounded by Dustin Pedroia and Kevin Youkilis, this team will score a lot of runs. And if either Josh Beckett or John Lackey can bounce back from sub-par seasons—both would be a stretch—and join Jon Lester and Clay Buchholz as stoppers in the rotation, I don’t care if the Yanks get Cliff Lee or not.

At least Boswell snuck in a nice jab at Derek Jeter, saying, “Didn’t the Yanks help the Red Sox out enough already by re-signing their utterly immobile captain for three more years? Derek Jeter, a handsome marble column of a shortstop, has finally gone from ‘iconic’ to ‘Ionic.’ ”

I take an occasional bet, and my money says that President Obama wishes he had messed up just as badly—according to sage Boswell—as Theo Epstein