Hijabs mandatory to compete in the world championship. 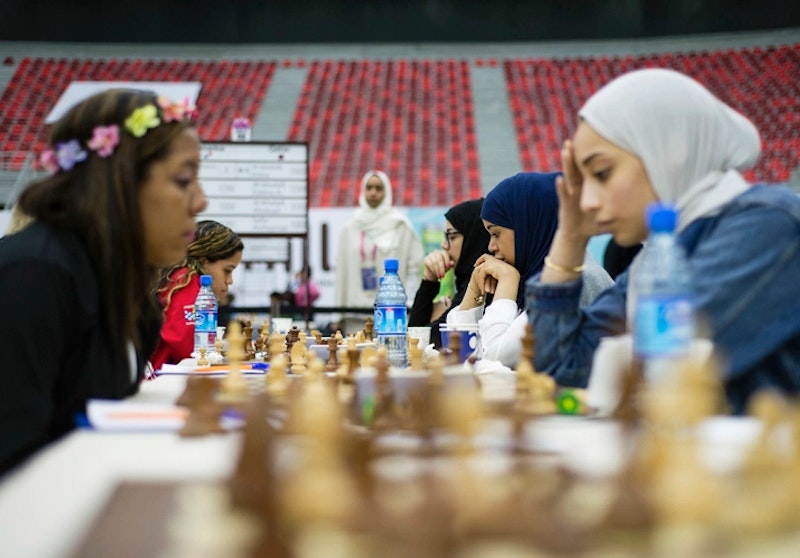 In 2010, multi-millionaire Russian businessman Kirsan Ilyumzhinov claimed on Russian state TV he’d encountered aliens on the balcony of his Moscow apartment who took him aboard their spaceship for several hours. During that time, they showed him “some star,” and then took him home when he asked. Aliens are just like everyone else, Ilyumzhinov assured the public.

Ilyumzhinov, who’s close to Putin, is no stranger to sketchy company, having met with Bashar al-Assad, Saddam Hussein, and Muammar Gaddafi in the past. He’s also been the President of FIDE, the international governing body for the game of chess, since 1995. FIDE has just announced that next year's Women’s World Championship will be held in Iran, meaning that all competitors will be required to don a hijab if they want to avoid being arrested by the “morality police.” Hijabs have been compulsory in Iran for women in public since the Islamic revolution of 1979.

Chess is played by hundreds of millions all over the world, yet its profile lags well behind its popularity. Much of the blame must go to Ilyumzhinov, who oversees chess’s international development. The Russian businessman was forced to temporarily step down from his position last year after being placed on a U.S. sanctions list for illegally aiding Syria.

The outrage, and the competitor boycott threats, came on the heels of the tournament’s venue announcement. Many women see the hijab as perhaps the most visible manifestation of the oppression of women inherent in Islam. Forcing competitors to wear the headgear of another religion is a clear violation of basic human rights and religious freedom.

Although the established media tend to get wobbly when a woman wearing a hijab enters the spotlight (recall the swoons during the Rio Olympics when Team America fencer Ibtihaj Muhammad competed in a hijab, “making history”), it's a piece of clothing that men force women to wear. The “progressive” viewpoint represented by the media is that the hijab confers authenticity. Without the scarf, a Muslim woman is a diminished, Western version of a true believer. Such a woman competing in the Olympics would receive no recognition at all.

Joining in the effort to normalize the hijab, Playboy recently ran an article about a Muslim-American woman “making a forceful case for modesty.” A forceful case? That sounds like Playboy, which used to be stuffed with photos of nude women, might hypocritically be suggesting that Muslim women who don't wear a hijab are immodest. This is the new form of pure conservatism masquerading as progressivism known as regressive leftism. The woman featured in the article, Noor Tagouri, related stories of how she used to be teased for her hijab, but there was no mention of how the garment is often used to slut-shame women who opt out of it, in the competition to see who can be the “most Muslim.”

Try to imagine a major publication (Playboy no longer fits in this category) running a photo spread of an Amish woman, displaying her in traditional garb meant to protect her modesty, and stating that she's making a “forceful” case for it. It's not even conceivable. Switch that to a brown person in Islamic garb and it somehow becomes the epitome of progressivism, as if it is championing a victimized group.

In 2004, Ilyumzhinov won re-election as FIDE president after defeating chess legend Garry Kasparov in an election The Telegraph reported as “a sham.” This person who has no problem playing chess with vicious brutes like Gaddafi and al-Assad, and photographed smiling next to them, is the wrong guy to be heading up FIDE. Now he’s chosen one of the world’s most oppressive nations, and a place it's unsafe for women to travel to, to hold the championship. He's caved to the demands of the terrorist state of Iran for the sake of expedience, without the slightest consideration for the women whose rights will be violated. These women now have to make a tough, potentially career-damaging choice. They can't expect much support from Western feminists, who suddenly become meek and understanding when women are mistreated in the name of Islam.

Doing business with Iran is necessarily a dirty business. The way to avoid it is to hold the tournament in a nation not run by despots, which isn't hard. Kasparov wouldn't even have considered talking to the Iranians. We saw what the FIFA scandal did to soccer, but soccer is strong enough to survive anything. Chess, on the other hand, underachieves, and needs an authentic chess hero like Kasparov guiding it instead of someone who believes chess comes from outer space, as Kirsan Ilyumzhinov does.