A smart right-winger lies to himself about the Machado case. 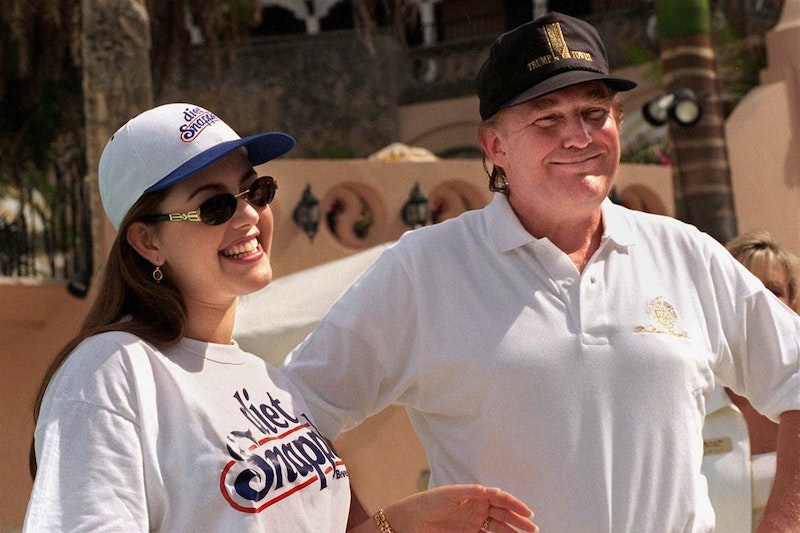 Allahpundit, a blogger at Hot Air, is my favorite conservative writer and maybe my favorite political writer. He’s intelligent, informed, and sensitive, and writes a direct, graceful, colloquial prose that I admire. Somehow this fellow manages to be a wingnut and hold to his movement’s creed, which is that the media’s a racket designed to help liberals and serve dirt to conservatives. As far as I can tell, he holds on to this belief by means of override. A reward of following him is catching the moments when override kicks in.

For instance, there’s Allahpundit’s treatment of the Alicia Machado case. News reports indicate that the former Miss Universe has done a few things in her life. Not only did she endure insults from Donald Trump for her weight gain, she may have driven a would-be murderer’s escape car and threatened a judge. Hillary Clinton didn’t mention these possibilities during Monday’s debate, when she brought up Trump’s snotty treatment of Machado.

Allahpundit ponders Clinton’s gambit. Why bring up the case when the victim has a scandal attached? Perhaps, Allapundit says, Clinton counted on a falling-off of interest after the debate. She figured people would hear about the Trump bit and not the judge bit. He continues, and this sentence is gold, “Besides, Clinton can say, the Venezuela business doesn’t prove that Machado is lying about Trump; he’s on the ballot, not her, and he’s still a jerk to women even if she’s no saint.”

Well, yes, Clinton could say that and she’d be right. In 1996, when Trump summoned the press to watch Machado go through a forced workout, he didn’t look into the future and decide he had to give this girl shit because one day she’d (allegedly) threaten a judge. He saw a 19-year-old who was fatter than he liked and he proceeded as he thought best, which was to humiliate her. What she may have done later on, to other people, doesn’t enter into it. Trump showed himself wide and plain, as he tends to do, and Clinton took proper aim.

The great thing, the Allahpundit thing, is that Allahpundit states the common sense of the matter quite well (I mean the “he’s still a jerk to women” sentence) and follows it immediately with “This is a glimpse at the future of political warfare in an age of instant media, where you have every incentive to lie on a big stage because you know that the audience will splinter before the whole truth can be told.” What lie? Clinton laid out what her opponent had done wrong. She didn’t add, “There are some allegations about the girl.” No politician would’ve, before or during the age of media fragmentation. But Allahpundit acts as if she’d been caught sandbagging the truth.

That part is override. Look the facts full on, sum them up well, and then pretend they’re something else. Allahpundit works the same magic in a follow-up post. “The Clinton camp wanted to spend the week talking about this,” Allahpundit writes, and “this” means the Machado business. The day before, the Democrats were counting on nobody paying attention after the debate. Gosh! But the beauty part is when Allahpundit denounces “the media’s collusion in Clinton’s ploy. She meticulously set a trap, with a campaign ad and various newspaper interviews with Machado already in the can before her name was mentioned at the debate, and then sprang it.”

Collusion? I guess Hillary’s campaign tipped off publications. But the stories didn’t run as a favor to Hillary. If a new name comes up in a presidential debate, the press writes stories about the name. That’s especially the case if the name’s attached to a sensational charge, such as the very plausible claim that Trump called the girl “Miss Piggy” and “Miss Housekeeping” (for being Latina). The press doesn’t do this to help Democrats. The press does this because it’s the press. But I love those indignant italics—“already in the can.”

This second post is about the determination of the Trump camp to keep talking about Machado. He pegs his post to Newt Gingrich’s publicly stated views on how fat a Miss Universe should be. “I don’t get it,” Allahpundit says, and he reels off some shrewd advice to Trump surrogates: “demanding to know why the media cares more about this garbage than about the number of unemployed… challenge Clinton for patronizing women by assuming that they’d rather revisit old beauty-pageant squabbles instead of talk about America’s big problems,” etc. I don’t agree with the substance, but they’re good lines. Take them as evidence of Allahpundit’s superior brains, and marvel at how those brains exist beneath his overhang of daffiness.

What his post describes are Gingrich and Trump saying the kinds of things they feel like saying, and everybody else reacting. But here’s Gingrich “handing the pro-Clinton press a peg for more Machado coverage,” Allahpundit complains. Allahpundit can see every stupidity the two characters pull, but he writes as if a media conspiracy were taking place to make them look bad. Override.