Don’t doubt we could fight over everything. 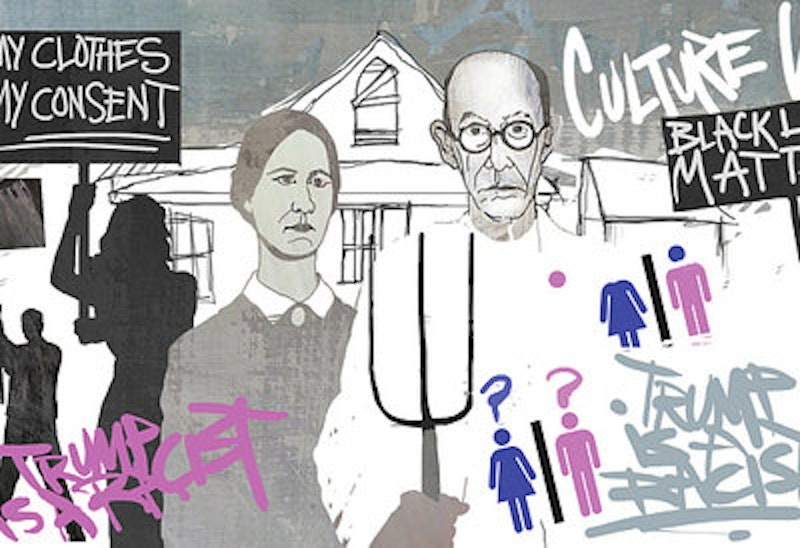 This stupid country has now gone so anti-gun psychotic (in a highly coordinated fashion) that not only a search for “ar 15” but even one for something like “Guns N’ Roses” in the Shopping tab of Google will yield zero results (whereas you get innumerable results for “Pink Floyd,” etc., etc., and of course with Google, individual results may vary—who knows?). OK, now they’ve fixed it, but I swear this was the case earlier and was much talked about on Twitter. Maybe it’s just that Google has flagged me, personally, as unfit to market to, since I distrust government and now distrust Google. But other people have described similar results.

So censorship-prone has this country become, in both the proper governmental and the informal private senses of the word “censorship,” that I fear we may yet live to be elderly, dying cyborgs hearing a frightened fellow prisoner, trying desperately to keep his head down as the searchlights comb the wasteland, whispering, "Words are bad! You must not use them, friend!" as we expire.

If current worries about guns can take out a rock band as a side effect, who knows what the new puritanism will smash next? One of the reasons sane people are hesitant to get caught up in the right/left culture wars is our awareness that the material the culture warriors could in theory turn into fodder for conflict is effectively limitless.

Oh, they have to pretend that the latest faddish battle is the most morally urgent since the days of Rome, but you know darn well they could—and may—just flip through an encyclopedia looking for things they haven’t yet expressed outrage about and then conjure reasons. That’s about how this works.

I’ve expressed surprise before that, for instance, dwarfs haven’t become, so to speak, a larger locus of outrage. There are endless ways they’re inconvenienced by stuff made for large people. Surely there’s some protest fodder there, but the faddish outrage mobs haven’t gotten around to that one yet—though there’ve been some targeted complaints about “dwarf-tossing,” and diminutive Star Wars actor Warwick Davis got someone booted from Twitter merely for saying Davis has a whole “midget family,” which is not the preferred terminology.

In a world this easily offended, I shouldn’t be surprised that everything that offends the ear or eye is being expunged (my apologies to the deaf and blind).

And, look (apologies to the blind again), I realize it’s not just politics that moves by convulsive fads. It’s markets, too. Kylie Jenner may have nudged tech history in a new direction merely by sending a tweet saying she’s bored with Snapchat, after which the social media company lost a billion dollars in stock value.

But law and morality should in theory be a bit more timeless and stable than the vicissitudes of the Dow, right? Well, not the way the culture warriors do it these days.

It was but one decade ago that we regularly read articles such as one I recall chastising indie rock for not incorporating enough elements borrowed from other cultures and as a result being too white. But today, in an amazing moral hairpin-turn, you’ll be condemned as a cultural appropriator if you try putting some South African chants or Native American drums in the background of your neo-shoegazer song. I lost three (admittedly very, very stupid) Facebook friends a couple of years ago by suggesting that it’s okay for artists to wear faux-Native American headdresses as part of their art. Imitation may not always be flattery, but it’s not automatically genocide. Three of my acquaintances disagreed, though. (One of them worked for Pokemon but was still not fond of culture-blending, I guess.) Farewell.

Of course, the kinds of culture warriors who are upset by the headdresses are not upset by borrowing bits of costumery from, say, Catholic nuns or priests—though other culture warriors, across the aisle, surely will be. You can come up with rationales for all these shifting reactions, though. That’s the main thing people on campuses and at online magazines seem to live for these days, in fact. But you’d do humanity a greater service by admitting it’s all shallow, unpredictable, time-wasting faddishness, always trying to get to the front of the next wave of the outrage mob. Having admitted that, abandon such conflicts in favor of nuance and peace.

Some conflicts, by contrast, are legitimate, long-simmering, and important, but if the horde is moved to a frenzy by every shifting trend, you end up with inter-ethnic allies one day and, well, a black woman who doesn’t want to befriend white women the next. This is no way to maintain a social fabric.

Speaking of fabric, I noticed walking by the windows of Bergdorf Goodman here in New York City that someone came up with the brilliant, Boomer-targeting idea of creating clothing that looks simultaneously like hip retro-disco 1970s outfits and like the spangly, scales-like, shiny outfits toward which for some reason all elderly women in this society are eventually expected to gravitate. Time at long last to don the elder-wear, Boomers. Bergdorf Goodman has spoken.

But why just treat this as one option in the marketplace? Now that I realize pretty much anything can become a locus of culture war, I think I’ll declare these outfits a positive political good and encourage censoring anyone who disagrees. The hyper-politicized people can surely concoct some rationale for me. Disco was heavily influenced by funk and thus black people, right? So if you hate the disco-oldster outfits at Bergdorf Goodman, you’re racist. No, but wait. Disco was sort of white people appropriating black musical elements. So if you like the disco-oldster outfits, you’re a racist colonizer appropriator. Whee! See how easy this is? Let’s see what else we can arbitrarily fight about this week.

I griped on Twitter last week about Pepsi suddenly using incredibly flimsy plastic in their new two-liter bottles so that the bottle almost collapses in your hand like a paper bag during pouring. That could be a culture war battle. Poor people are more likely to drink soda, so this is oppressing them. But wait, if you want more plastic in your bottle, you’re encouraging more petroleum use and thus killing the planet. We should be able to fight over that one for a few days at least. (Someone get that food critic nicknamed Review Brah involved. The more famous he becomes, the more recognizable my Halloween costume will be if I decide to go as him this year.)

Wise libertarian economist Bryan Caplan recently wrote the book The Case Against Education, arguing that college is mostly a “signaling” device for showing you’ve entered the elite, not mainly a place where necessary knowledge is conferred. That could be a whole culture war right there.

East Village punk bar the Continental recently banned use of the word “literally,” which is obviously an overreaction to the word’s misuse by people who think it’s just a noise one spits out from time to time for emphasis, as opposed to a way of making clear that one is not speaking figuratively. Misusing words is bad, banning words is bad, punk is good, rock is arguably dead, the Continental is supposed to close this year, and the bar shares its name with the assassins HQ in the John Wick movies. All that should be grounds for a pointless culture melee of some kind. Get to it, Twitter.

People at the Apple HQ have reportedly been accidentally banging their heads against glass in that hyper-modern space—but this isn’t just evidence Apple is stupid or unlucky. It’s a fantastic indictment of modernist architecture and its tendency to put stark theory or obsession with efficient materials before livability and usability—that is, to put theory before practical considerations rooted in our flawed but predictable human psyches and traditions. Turn that into a big fight with offended parties on all sides, why don’t we? (Pretentious architects can get very angry when you insult their terrible modernist designs. Some of them must be on Twitter.)

And are science buffs just going to sit back and take it while hipsters and fey artist types ruin the idea of the multiverse with stuff like the wussy new movie Entanglement? Stop appropriating the multiverse (and robots and telescopes and stuff), half-educated hipsters.

And with the Oscars coming up and Hollywood now exposed as a bunch of molesters—but also with MeToo-era citizens now so sensitive that even a hand on a colleague’s shoulder for a moment is material for a tell-all column—there’ve gotta be a dozen or so new or impending films we can turn into political hot potatoes, in some cases even before they open. Annihilation? Too many hot chicks. A Wrinkle in Time? Too ethnic, or not ethnic enough. It also makes Central Intelligence look very sinister, and that must upset some. The Pacific Rim sequel? Appropriating Japan. Isle of Dogs? Ditto. Unsane? Exploiting mental illness, or maybe exploiting brave mental health professionals by pooh-poohing mental illness. Fight it out. I Kill Giants? Also exploiting mental illness—and offensive to dead giants.

And now, more and more celebrities are even contesting the true shape of the Earth, resurrecting the old idea it’s flat. Sure, why not? Fight that out again, too.

Indeed, if for some reason it’s a fight you want, America, it need never, never end—unless we’re smart and calm enough to ask ourselves why we keep doing this and who, if anyone, stands to gain.