GOP incumbent Larry Hogan might get swallowed in anti-Trump sentiment. 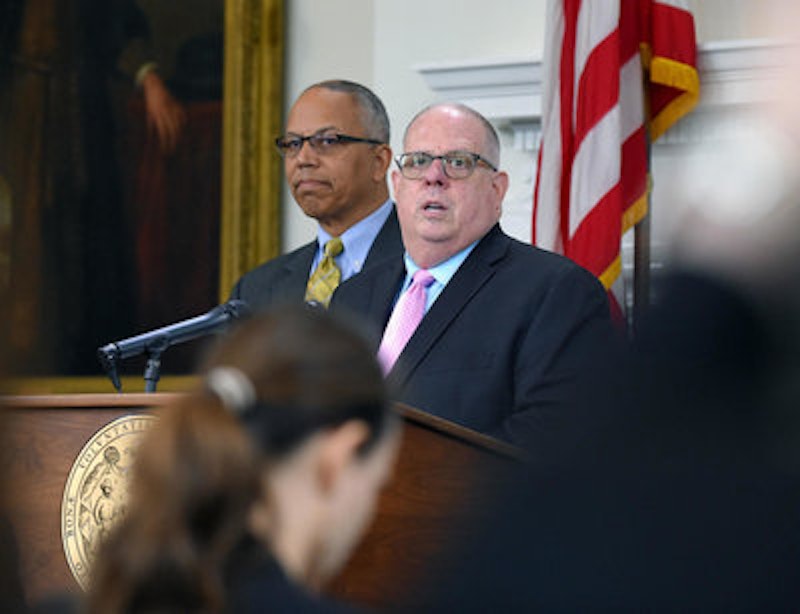 The measure of Maryland’s Democratic Party is the caliber of its candidates for lieutenant governor. The party’s bench is wide and diverse, but not deep. One by one, and two by two they come, in all colors, shapes, sizes, genders and manner of dress, ready to serve as understudies for, perhaps, an eventual grasp at the golden ring, or even attention for some other future endeavor.

The same can be said of the Democrats’ varsity. With a few exceptions, it has in numbers, variety and impressive resumes what it lacks in political heft. They’re a rare assortment of candidates for governor, seven in all and mostly outsiders. Two are term-limited, one is retired, one is giving up a state senate seat, another is the former head of the NAACP, one is a former this-or-that’s and last, a young entrepreneur. The rag-tag line-up is unusual for a party that’s always been built on stepping-stones to the top.

So, the Democrats have a list of largely untested candidates that says two things: (1) No candidate for governor can legitimately be described as a big-foot candidate in the political sense; and (2) the best and the brightest recruits the party has (with an exception or two) may not have been willing to pair up for lieutenant governor because the risk and embarrassment of rejection is a career setback.

As two-person teams, and as a partisan collective, they are in formation to try and recapture the governorship from a popular Republican who has endured remarkably intact in the polls and in public regard through bouts with cancer, the loss of family, riots in Baltimore, a murderous crime rate in the city, shameful conditions in city schools and four turbulent sessions with the Democratic-controlled General Assembly. And along the way, he may have disappointed some but he hasn’t angered many.

No lite governor has ever made it to the top, though four of the eight have tried since the office was reconstituted in 1970. The 2018 crop has expanded the established mating game to nearly its elastic limits, tightening the Baltimore-Washington suburban nexus into an irreversible loop with a single exception—the all-Baltimore tag team of attorney James Shea and Councilman Brandon Scott.

Nonetheless, there have been two notable instances when the state’s second in command were stripped of their epaulettes and sidelined because of policy differences or betrayals. Gov. Harry R. Hughes (D) benched Bogley for most of his single term and dumped him in 1982 because of public disagreements on the abortion issue; and Gov. William Donald Schaefer (D) banished Lt. Gov. Melvin Steinberg for his entire second term over a double-cross on a tax proposal. There have been occasional jesting calls to abolish the office.

Candidates for lieutenant governor, either brokered or hand-picked by a ticket’s topsider, bring very little to a team except, perhaps, geographic or political gratification. Usually they have no broad political base or vote-pulling power; they have very little fundraising appeal; they have little or no wide recognition; and their exposure has little value. What they’re expected to add is the ability to step up to the top slot if it becomes necessary, which is the reason the position exists.

The winning duo will face Republican Gov. Larry Hogan and Lt. Gov. Boyd Rutherford in the November general election. Polls have Hogan holding steady at around a comfortable 62 percent approval rating, but nonetheless a decline from his high point of 72 percent.

Among the Democratic match-ups, undecided voters noticeably outnumber those who are committed—47 percent in the recent Goucher poll and 32 percent in the Mason-Dixon Polling & Strategy survey. But the pattern is consistent wherein they mirror each other. In the Mason-Dixon poll, for example, Baker is out front with 26 percent, Kamenetz 15 percent, Jealous at 14 percent. The rest of the pack is in the low single digits. Nearly ditto in the Goucher poll.

Organization is the key to primary elections. Democrats usually vote in light to moderate numbers while Republican turnouts are historically low because the GOP rarely has a contested primary. For the general election, Democrats are looking ahead to a possible “blue wave,” a heavy turnout across the country in the midterms in an angry rebellion against President Trump and his policies as well as his abuse of the presidency. (Hillary Clinton carried Maryland by 26 points in 2016.)

Polls mainly reflect name recognition this far out from an election. So, it’s a natural that Baker and Kamenetz are leading the pack. They represent two of the state’s most populous counties and they’ve been county executives for eight years and in lower offices before that. Keep in mind that polls are often wrong. In 2006, for example, the incumbent Republican, Robert Ehrlich, had a 65 percent approval rating in the polls and lost the election to Martin O’Malley. So, candidates for governor beware—don’t expect a boost from your choice of a running-mate. Seasoned politicians run to win, not to make a difference.