Feinstein Should Be Voted Out

Even if she isn't, the primary challenge is good for the left. 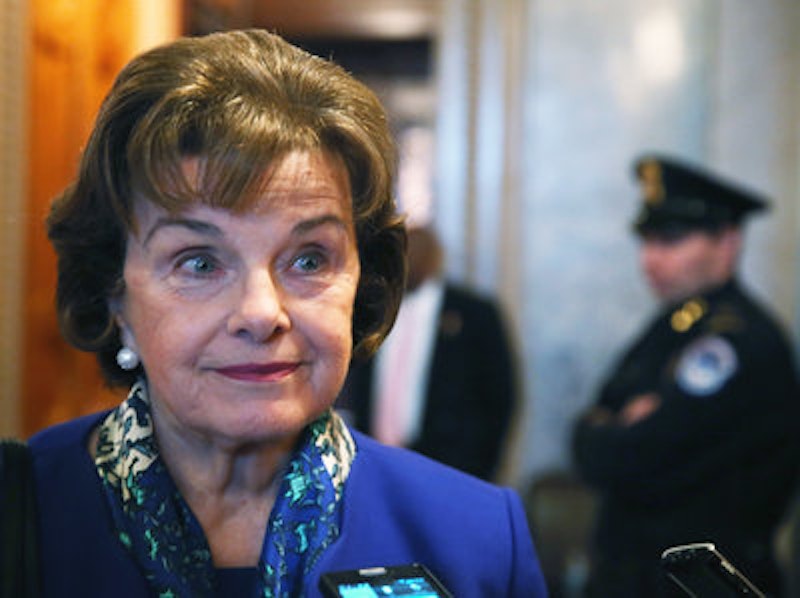 California Democrats delivered a stinging rebuke to Dianne Feinstein over the weekend. Feinstein’s been California's Senator since 1992, but as she enters a run for her fifth reelection, Democratic activists said they’re sick of her. Her opponent, state Senate leader Kevin de León, won an endorsement vote from the party by 54-37 percent. That's not over the 60 percent threshold needed for the party to make an official declaration. But it's an embarrassing loss for a sitting senator.

Feinstein's defeat has led Clinton partisans to pick up their old shields and swords and megaphones on social media. Feinstein's supporters warn that the attacks on Feinstein will lead to a divided party and humiliating loss in the general election. Feinstein’s been a reliable vote for a generation; doesn't she deserve our respect and support?

I think the answer is no. Politicians don't deserve respect for past service. On the contrary, democracy works best when politicians are frightened that their constituents will toss them out of a job. Primary challenges over substantive issues are a good; they force politicians to remember that they serve at our discretion.

Feinstein in particular, for anyone who cares about left causes, is a terrible senator. She's substantially to the right of her constituents, as 538 notes. She's voted with Trump 31 percent of the time, though given the liberal electorate in California, she'd be expected to vote with him only 19 percent. She's been a proponent of NSA surveillance measures; she co-sponsored the extension for the PATRIOT act, and she's consistently voted to give security services more authority to spy on Americans whenever she's had the chance.  She's a wearisomely reliable foe of marijuana legalization measures. She's against single-payer health care, and supports the death penalty.

Feinstein isn’t the worst senator in Congress; she backs gun control legislation, supports the Affordable Care Act, and is vastly superior to even the least repulsive of her Republican colleagues. But as Democrats go, she’s mostly mediocre and sometimes awful.

A lot of Feinstein's constituents disagree with her policy positions. If this were a dictatorship, they'd have no choice but wait to express their disapproval until she decided to retire. But, in a democracy, constituents can try to push their representatives to change. They do that, in part, by challenging them in elections.

It's an uphill battle to beat an incumbent in a primary. Polls have shown de León trailing by almost 30 points. Still, a lot of that is probably name recognition, and the Democrat endorsement vote shows he has enthusiastic support from party activists. He may not be able to win, but he can close the gap considerably, and give Feinstein a scare.

Feinstein, at 84, probably won't run again after this term. Still, a left show of strength against an incumbent can put other senators on warning that they may face challenges if they keep voting with Trump, shill for surveillance, or support throwing people in prison for cannabis convictions. And in California there's little downside, no matter what Feinstein proponents say. With Trump's popularity sinking, the chance of a Republican shutting out Democrats in California's odd top-two ballot is very small. In fact, a strong challenger like de León could even edge out the top Republican challenger, meaning there'd be no Republican senate candidate on the ballot in November. That would hurt the Republicans’ down ballot.

Obviously, a primary challenge does create some interparty tension. And just because Feinstein is often bad doesn't mean any attack on her is okay. De León supporters chanted "Time's up!" when Feinstein spoke at the party convention; that's a chant associated with #MeToo. Using a slogan about combating sexism to denigrate a woman politician isn’t a good move, and one hopes de León's supporters will avoid it in future.

Politicians do what they think will win them votes. If Democrats figure the left will tag along no matter what, they'll focus on compromising with Republicans and try to pick off some centrists to win elections. If they're worrying about left primary challenges, they'll move to the left. De León may not win, but who knows? That's why you have elections.