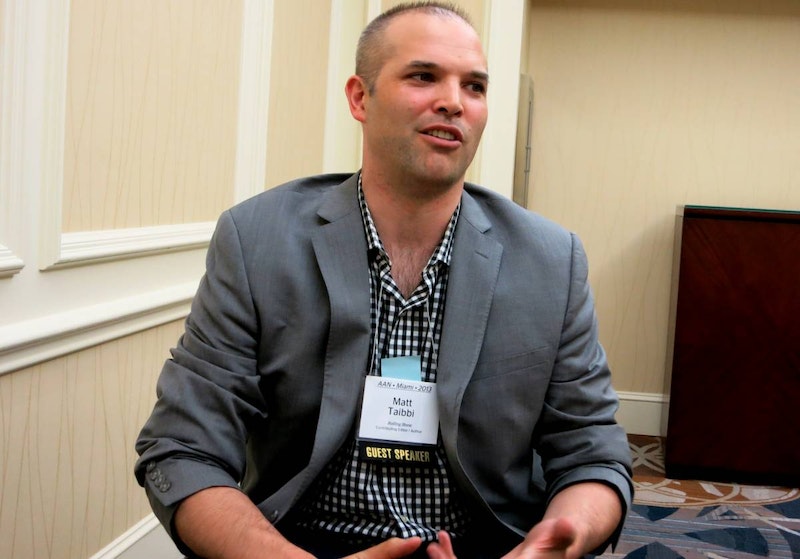 Taibbi is Stephen Glass, the notorious 1990s New Republic writer who made stuff up to gain fame from liberal elites. As has been reported, Taibbi is now swept up in questions about misogyny and sexual harassment. In 2000, Taibbi and Mark Ames published The Exile: Sex, Drugs, and Libel in the New Russia, a memoir of their first year of editing The eXile, a weekly in Moscow. According to the Chicago Reader, The eXile “took on the corrupt culture of post-Communist Russia, mercilessly attacked the expats who moved there to get rich quick, and gleefully exposed the shoddy reporting in the mainstream media."

A lot of the writing was also brutally misogynistic. In one part, Taibbi and Ames describe Kara, a female office manager:

We’d never given her any respect or credit. We were glory hogs and obnoxious jerks. Worst of all was our sexism. Our sexism and sexual harassment of the Russian female staff, as well as the sexism in our newspaper, was too much for her. Watching us harass the young female staff had to be the most painful part—because we’d never, in a million years, have thought of harassing her.

“You know I’m not PC. But there’s a limit. You go too far. You’re always trying to force Masha and Sveta under the table to give you blow jobs. It’s not funny. They don’t think it’s funny,” Kara complained.

Now sensing his lucrative career may be in trouble, Taibbi, who has a new book out called I Can’t Breathe, has taken to Facebook to issue a statement about The Exile. It reads in part:

Some Internet observers believe this denial is belied by the book jacket, which describes the eXIle [sic] as non-fiction. As to that, the publisher of the book, Grove Press, has issued a statement:

“The statement on the copyright page is incorrect. This book combines exaggerated, invented satire and nonfiction reporting and was categorized as nonfiction because there is no category for a book that is both.”

A lot of The Great Derangement involves Taibbi’s adventures as a hipster among Southern born-again Christians. At one point he goes to a meeting at the house of some fellow churchgoers:

Frightened by a [group] of fifty-something housewives with crayon-thick eyeliner and Nancy Reagan hairdos—and anxious to avoid their pious, potbellied, truck-driving husbands—I spent the entire meeting clinging to an octogenarian Japanese anesthesiologist named Hiroshi Nakitomi, a stroke victim with memory lapses who sat mute a the dinner table tranquilly clutching a cane with a saintly smile on his face. I must have spent nearly forty minutes quizzing the good old doctor about the types of anesthesia he used over the years. Like all drug addicts, I have an unhealthy fascination with this subject. “You ever use methoxyflurane?” I asked. “I mean, what’s your go-to general?” He looked at me and smiled. “Putting them out isn’t the problem,” he said. “The trick is making sure they wake up.” He nodded, pleased with his joke. I laughed with him. “How about trichloroethylene? When do you use that?”

Taibbi is aping Hunter Thomson here, which he has done his entire career, with results that predictably may slide into fiction. How convenient that Hiroshi Nakitomi is “a stroke victim with memory lapses who sat mute.” That kind of thing makes it almost impossible to fact check. I tried, but could find nothing on Dr. Nakitomi.

In his Facebook apology about The Exile, Taibbi writes that when he was young he admired writers “who were either outright insane people or defective as human beings.” He also retreats to the shelter of his family, saying that they mean everything to him and because of them he is a new man. It’s an appeal to the kind of Republican bourgeois values Taibbi has spent his life attacking. He describes how all he ever wanted was to be a writer.

Taibbi didn’t want to be a writer. He wanted to be a particular kind of writer—the hip, cool, gonzo-lite Rolling Stone correspondent who gives talks at Politics & Prose and soaks in applause for preaching to the elites about “the madness of Donald Trump.” Taibbi had no interest in being a great writer, with the hard learning, ideological self-examination, and spiritual questing that that entails. Like Stephen Glass, Taibbi wanted to be cool.

But to be truly cool, one has to be truthful.

So Matt, let’s start here: Is Hiroshi Nakitomi a real human being?