The lone Republican Congressional member from Maryland is reliably right-wing. 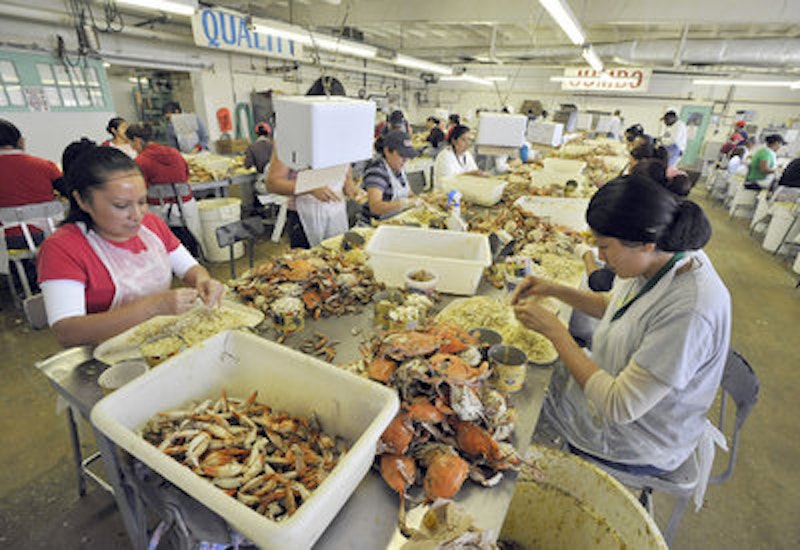 —This column was written before the announcement of Sylvia “Cookie” Harris’ sudden death.

Republican Rep. Andy Harris is wriggling and writhing between the two extremes of his ink-blot First Congressional District—Baltimore County’s Cockeysville tip where he attends Roman Catholic mass and hears sermons on social justice and the Eastern Shore end which is one of the most conservative areas in America.

At Sunday mass at St. Joseph Church, Harris no doubt glazes through homilies on accepting immigrants into mainstream American life as most of the newly arrived Hispanics are overwhelmingly Catholic. And the Catholic Church is solidly behind health care for everyone except for the mandatory birth control provision.

Parishioners there say Harris fulfills his Sunday obligation with none of the customary social interaction with congregants that politicians usually display, no schmoozing, no after-mass handshaking, no backslapping, just a starched 1950s Catholic demeanor of one who comes and goes without so much as a friendly word or smile.

To compensate for being Maryland’s only Republican congressman in an outrageously but thoroughly legal gerrymandered district, Harris picks on programs that serve the majority-black District of Columbia and the marginally poor in Maryland (you know what color) who rely on the Affordable Care Act for subsidized health insurance as well as those who are seeking a helping hand in a strange and often hostile new land.

Harris was in full gloat last week when he seemed to get his wish—a federal investigation into Maryland’s botched and bungled health care exchange. He announced that the Office of Inspector General “has moved this from an audit into a full-blown investigation.” From the news that’s been reported, it appears that the inquiry, for the moment, at least, is focused more on the private contractors than on state government.

For Harris, a physician, the ACA (Obamacare) is “socialized medicine,” anathema to him and fellow House Republicans who have voted more than 50 times to repeal the law even though it is working and here to stay. Their major problem with Obamacare is that the program is fulfilling its promise of near universal insurance and lower health care costs. As events often come back to bite, Harris once complained bitterly about a gap in federally provided health care for members of Congress and their staff that left him uninsured, briefly, between pay periods.

Immigration is another of Harris’s demons. He argues at community meetings that “immigration is out of control” yet he is a stalwart member of the Congressional bloc that refuses to take action on the problem. Harris opposes broad immigration reform unless border security comes first which is the same as saying no immigration reform all. But he supports allowing “transient workers” on the Eastern Shore, the seasonal workers who come to pick crab meat, because “transient workers don’t take jobs” away from Americans.

The U.S. Chamber of Commerce and many businesses, certainly not radical left-wing groups, support immigration reform to fill job demands in the lower ranks of the labor workforce. Numerous studies show that the kinds of menial jobs immigrants are willing to accept—i.e., dishwashers, janitors, construction laborers—go largely unfilled and begging without them.

The twist is that Cockeysville, with its sprawling colonies of rental apartments, is host to huge settlements of immigrants of all hues and tongues. And several organizations, including some affiliated with Catholic social services, have offered to accept children who have crossed the border into America. To that, Harris says, “Immigrant children pose a problem for the First District.” He cites a burden on schools and entertains constituent talk of diseases, the two shibboleths often raised by anti-immigration activists.

Threatening the District of Columbia is a standard weapon in the Republican toolbox. Harris has intruded into the District’s business by threatening to withhold federal funds if DeeCee follows through with a planned referendum on the legalization of marijuana. With a predictable reactionary twitch, District Mayor Vincent Gray urged residents to boycott Maryland’s First District, notably Ocean City.

The point of decriminalizing pot, as Maryland has, is to avoid prison time and a permanent criminal record for simple possession of small amounts of weed. In black-majority Washington, as elsewhere across the nation, black youths are more likely to be stopped and arrested than whites.

So just what, it is fair to ask, is this guy doing representing Maryland, one of the most reliably Democratic and progressive states in the nation, where the Dream Act is law and Obamacare is welcomed even though its rollout was botched and is now the subject of a federal inquiry at Harris’ instigation.

The short answer is that Harris was deliberately invested in the First District, in part because the high-handed maneuver boosted the number of Maryland Democrats in Congress to seven of eight and also because it eased him out of the Maryland Senate where he could be more troublesome as one of 48 than as one of 435 in the House of Representatives.

The gerrymander had two purposes—isolate Maryland’s lone Republican to the largely rural Eastern Shore and create a new and safe Democratic district in Western Maryland. The First District’s population of roughly 652,000 is about evenly divided between the Eastern and Western shores of the district and is separated by the Chesapeake Bay.

To place Harris into context, he is the son of parents who fled the communist regime in Hungary after World War II. This, in large measure, has shaped his attitude toward government, similar to the experience of Ayn Rand, the doyenne of modern libertarians, who also fled communism in Russia. Harris claims to be opposed to repression of any kind yet he is repressing others by imposing his rigid ideology on anyone who does not conform to his beliefs.

And get a load of this! Operation American Spring, an extreme right-wing organization, has said that Harris is the first (and only) member of Congress to declare his support for their movement, urging the “arrest, trial and imprisonment of the top leadership of the American government for treason.”

So Harris has no real future of ascendancy within Maryland politics except what appears, for the moment, to be a safe seat in Congress. He faces a November 4 rematch against Democrat John LaFerla. And sensing that, he seems to have set his compass on advancing within the GOP caucus in Congress by choosing his targets carefully and narrowly. They provide the necessary notice and advantageous suck-up to catch the attention of the leadership. And to reverse the equation, Harris has proven to be more meddlesome in Congress, where he has joined a majority of nutjobs, than he ever was in the Maryland State House.

But strange things have happened in the First District. The seat seems to carry a heavy curse with a lethal price tag: Thomas Johnson went to prison in a savings and loan bribery scandal; Rogers C. B. Morton resigned the seat to serve in the Nixon cabinet; William Mills, Morton’s administrative assistant and successor, blew his brains out with a shotgun in a money scandal; Robert Bauman was busted and disgraced for propositioning a teenager in a Washington men’s room; Roy Dyson was defeated after series of scandals; and Wayne Gilchrest lost the GOP primary to Harris in a dispute that involved former Gov. Robert L Ehrlich Jr. And it took Harris two attempts to win after he was defeated on his first try by Democrat Frank Kratovil only to reverse the roles the second time.

Congress returns from its summer break on Sept. 8 and has only 12 working days scheduled before the midterm elections. There is a growing threat by Republicans to once again shut down the government if President Obama acts unilaterally on immigration as he has promised. It is as yet unknown whether Harris will join the suicide march that could exact a heavy penalty against the GOP in the November elections.

Harris, for all his incongruous beliefs and ways, has, however, made it clear that he does not support the move to impeach Obama. The White House must be disappointed. Harris may represent the First District, or at least the easterly half, but he surely does not speak for Maryland.