What do you expect from a one-company town? 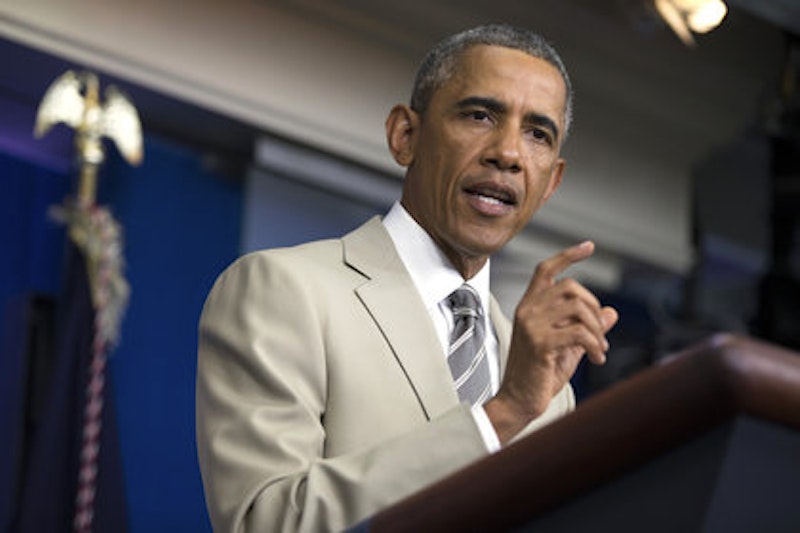 It’s now a matter of fact and certainty: President Obama can do no right. From the Affordable Care Act to immigration reform, from an uncertain foreign policy to raising the minimum wage, Obama has been badgered, belittled and battered like very few presidents before him. And now the deal is sealed: the guy can’t even pick the appropriate suit on a news conference day.

So when Obama’s legacy (or obituary) is written, if Twitter is an accurate weathervane, it will not suggest that the world was going to hell around him but that he had the gaucherie to wear a tan (khaki) suit, modishly side-vented but a slightly loose drape on his taut frame, in a town where the wardrobe palette comes uniformly in two accepted flavors, blue and gray, with subtle chromatic gradations among the preferred swatches. The color chart is followed so rigidly and almost unbroken as if enforced by some celestial dress code administrator. That Obama is mocked, head to thread, for a wardrobe malfunction is a parable for our manic times.

The power look that originated in fusty Washington is so 1980s. Those ubiquitous but insipid yellow and red power ties that haberdashed the town’s mustard-cutters and their copycats are now in consignment shops (or attics) along with Armani suits and shout-out plaids that typified the era that succeeded the golden age of polyester.

Washington is a town that floats on its own gases. It’s a company town whose only product is the company itself. Shorn of its monuments and statues and buildings and pricey restaurants for seven-figure pin-stripers, Washington is no different from Detroit, Wilmington or any other one-product village. They manufacture cars and chemicals. Washington manufactures itself. The nation’s capital is the source of its own momentum.

Here is The Washington Post’s description of its new publisher, Frederick J. Ryan Jr., and what passes for sartorial excellence (but unacceptable sentence structure) in Washington: “Ryan is known as an impeccable dresser, wearing gold cuff links inscribed with his initials and shiny black leather shoes.” (In two accompanying photos Ryan is wearing blue suits.)

Here is a man, Obama, the most powerful in the world, whose every bodily movement and function is scheduled to the second, who once told a Vanity Fair interviewer that he usually adheres to the blue-gray rule in Washington because it relieves him every day of having to make wardrobe decisions when other urgent matters require his attention.

But dare to be different. That very morning as he approached his closet where there no doubt hang suits in different hues and patterns—stripes in pins and chalks, blues and grays, plain worsted suits in navy and charcoal, glen plaid suits, gabardine suits, nailheads, flannels, maybe even a tweed herringbone number to give weekends a zip of country flair. And at the end of the suits are two navy blazers, one in single breasted, the other a double. He chose tan.

On the other side of the world, Vladimir Putin was shrouded in requisite commander in-chief muted gray with a similarly colorless solid tie, as he thumbed his nose at the west while his non-existent tanks and his no-name troops pushed farther into eastern Ukraine on a heady thrust of nationalist fervor and aggression. Consider the wardrobe factor: Putin’s poll ratings are above 80 percent, Obama’s numbers are below 40. Color is contagious.

In the sand-blasted Middle East, ISIS continued its taunt of America with a heretofore unseen display of savagery as propaganda while Obama was immersed in his systematic cogito, ergo sum attempts to formulate a coherent strategy to a complex puzzle that would align America and its regional partners with both friends and, oddly, enemies. The ISIS fanatics are usually clad in khaki and black. So just put away the tan suit when discussing the Middle East.

The press went nuts and the story went viral. The hue of the suit received almost as much attention, or distraction, as the real news of the day: “We don’t have a strategy yet.” Who knew? During the lead-up week, the White House deputy national affairs adviser, the secretary of state, the secretary of defense and the chairman of the Joint Chiefs of Staff all held news conferences or issued statements pounding the drums of war. Excuse the naiveté, but that roll-out sure sounded like a strategy in the bud.

Rep. Peter King (R-NY) went bonkers during an interview: “There’s no way any of us can excuse what the president did yesterday… For him to walk out—I’m not trying to be trivial here—in a light suit, light tan suit…”

There’s a durable fable that tan, or khaki, suits are reserved for weekends at the Hamptons, the yacht basin or the country club on barbeque night. Yet many presidents dating back to Dwight D. Eisenhower have worn tan with great effect and aplomb—Bill Clinton, Ronald Reagan, George H. W. Bush and George W. Bush. Franklin D. Roosevelt, as many photographs show, preferred white. Reagan, of course, could have appeared dressed as a cast member of Duck Dynasty and the star-gazers would have applauded the emperor’s new clothes.

Wearing tan (or white) Roosevelt got us through the Great Depression and World War II, Eisenhower delivered us from D-Day and the Korean War, Bush Senior knew enough to limit the Gulf War and Clinton presided over eight years of prosperity and growth. Until Bush Junior, tan suits were a charm. But Obama has a different kind of problem. Maybe it’s because a tan suit looks so damned good on a tall black man. White folks just might be envious.

According to the fashion expert and admitted dandy, Alan Flusser, in his indispensable book, Clothes and the Man, the tan suit is the perfect toast to summer: “[The tan wool] makes an invaluable contribution to a summer wardrobe, as its neutral color allows a limitless variation of summer color and pattern.”

And Joseph Abboud, the name-brand designer who fashioned many of Obama’s bespoke suits while creative director at the men’s clothing manufacturer, Hart Schaffner Marx, might have been addressing Washington’s look-alike male population when he said: “I applaud him for wearing a tan suit. You don’t want to look the same every day of your life. It’s boring as hell.”

Back to reality. Obama reverted to customary tones of diplomatic restraint for the NATO summit in Wales as he did earlier for the reassuring stop in Estonia. He chose, alternately, blue and gray. In fact, the class picture of the 28 NATO representatives in Wales was a gradation of the two colors except for German Chancellor Angela Merkel who wore—tan.

Obama’s tailoring met the moment. He was able to secure commitments from 10 NATO partners to form a coalition to help expunge ISIS as well as a 4000-member multi-national strike force to move swiftly in defense of jittery NATO members across the map. If clothes make the man, as Shakespeare wrote, Obama had better mothball the tan suit until 2017.