The Times pundit is unbearably discouraged about America’s “helplessness.” 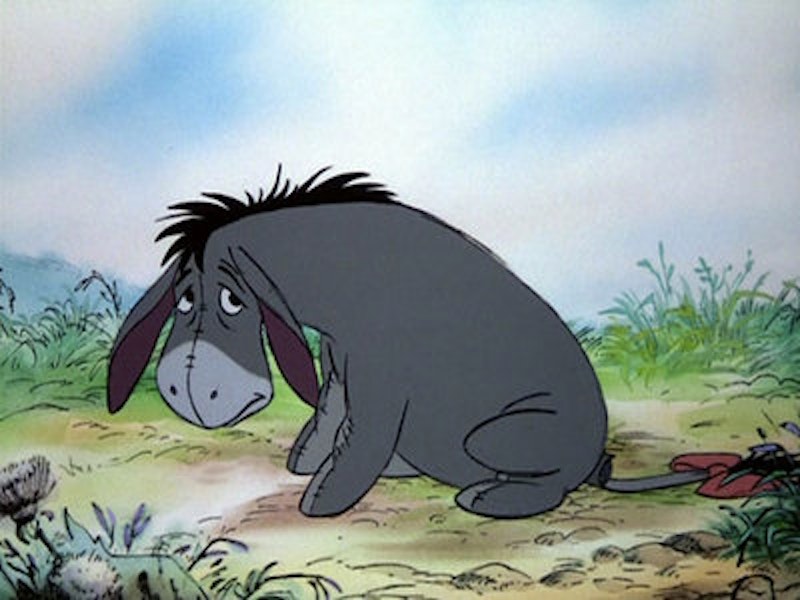 I’ve no idea when New York Times op-ed columnist Frank Bruni transformed into the Eeyore of American punditry, but judging by his latest column, the man is a pathetic mess. He acts like a Nowhere Man, someone who’s living in a shoebox (Ferragamo, of course). It could be that Bruni’s still in hangover-mode after the welcome, and rapid, acceptance of gay marriage across the country—that was one of his go-to topics. Or, and this is likely, he’s in a funk because the GOP has a reasonable shot of winning Senate control in November and maybe even the presidency two years from now. Not that he’ll admit to any of this: instead, he gloms onto recent polling (Gallup, Wall Street Journal/NBC News) that, per usual, gives low marks from those queried about the three branches of government and the state of the economy. Bruni points out that 49 percent of respondents mistakenly believe America’s still in a recession, and says, “Upward mobility increasingly seems a mirage, a myth,” rather than questioning the intelligence of the people polled. And, to be fair, with so many pollsters plying their work today—as opposed to just a decade ago—there has to be a weariness among those contacted, who say anything to get the inquisitor off the damn phone.

Bruni laments that in this Dark Ages epoch of American history, “conventional wisdom” doesn’t mean anything. Well, thank God for that—conventional wisdom has always been a Beltway Bubble trope for lazy journalists and isn’t usually correct. He moans: “Conventional wisdom has seldom been so useless, because pessimism in this country isn’t usually this durable or profound.” I’m certain Bruni’s mood would be even more suicidal had the news that Warren Buffett—that well-known “populist” who cleverly ingratiated himself to the Obama administration by saying he should pay the same tax rate as his secretary; meanwhile, he reaped a financial windfall in the ruins of the 2008 economic crash—is investing in Burger King, apparently fully supporting the company’s move to Canada, an “inversion” tax avoidance no-no that has Democrats in a tizzy, broken before his deadline. (It did, actually, but Frank undoubtedly didn’t want to revise.)

Bruni: “More and more I’m convinced that America right now isn’t a country dealing with a mere dip in its mood and might. It’s a country surrendering to a new identity and era, in which optimism is quaint and the frontier anything but endless.” Eeyore. This dubious declaration might’ve held up better if Bruni had included a self-disclosure that he, as a well-paid Times columnist and author, is living the good life. But no: just like his colleague, the 1%er Paul Krugman, Bruni’s more comfortable posing as ‘jes one of the folks, working four part-time jobs to make ends meet and redeeming CVS coupons to put dinner on the table.

Not that Bruni consults any Republicans about the state of the union: he cribs from Democratic strategist Doug Sosnik’s latest Politico article about the “anger and alienation” Americans feel about the government. And then he turns to Colorado Gov. John Hickenlooper, another Democrat, who told Bruni that Americans are, paraphrasing, “mad as hell” at everything in this country. Whether there’s a nationwide Howard Beale moment isn’t speculated upon. Which, when you think about it, would be very cool: people opening their windows coast to coast and screaming to a baffled sky.

And this leads to Bruni figuratively slitting his wrists: the restlessness of the country “[I]s about fear. It’s about impotence. We can’t calm the world in the way we’d like to, can’t find common ground and peace at home, can’t pass needed laws, can’t build necessary infrastructure, can’t, can’t, can’t.” As a Democratic partisan, Bruni doesn’t fess up to the fact that President Obama is thought of as “impotent” and disinterested (as his one-foot-to-the-glue-factory colleague Maureen Dowd continually writes) and that Americans aren’t, on the whole, pleased that Obama continually apologizes for the United States, as if that would quell the hatred that some nations have held toward the U.S. since it became a superpower.

It’s telling that a contemporaneous article in The Washington Post, liberally quoting from an article by Fraser Nelson, an editor at the UK’s Spectator, came to different conclusions. Nelson conducted a study that showed Britain, if it were the 51st state in America, would rank as the second-poorest, “behind Alabama and ahead of Mississippi.” Taken aback? Me too, but Nelson’s further comments are worth noting: “No one beats up America better than Americans. They openly debate their inequality, conduct rigorous studies about it, argue about economics vs. culture as causes… And the debate is so fierce that the rest of the world looks on, and joins in lamenting America’s problems. A shame: we’d do better to get a little angrier at our own.”

Not all political pundits have thrown in the towel. I rarely agree with The New Republic’s Noam Scheiber—he’s bluer than the state of Maryland—but at least he shows some spunk rather than merely marking time like Bruni. Scheiber’s latest TNR piece is an urgent wake-up call to Democrats who aren’t paying attention to the gubernatorial election in Wisconsin, one he calls the “second most important” this fall after control of the Senate. Right now, it’s a toss-up: incumbent Scott Walker, the union-bashing, anti-tax Republican is facing Mary Burke, “a little-known executive at the bike manufacturer Trek.” He says the election could “shape U.S. politics for years to come.”

Should Walker prevail, he’ll be catapulted to a leading contender for the 2016 GOP presidential nomination, and although the man is a wet noodle on the stump and not especially photogenic, he’d certainly fare better than wacko Sen. Ted Cruz or a re-tread moral crusader like Mike Huckabee. And, unlike Mitt Romney, who never mussed his hair, Walker’s like an alley cat who’s been in more scrapes (his bitter and victorious recall election in 2012) than most pols, which would work to his advantage. I happen to believe that “progressive” darling Sen. Elizabeth Warren (whose protests that she won’t run if Hillary Clinton does are becoming less convincing by the month) stands a decent shot at becoming the Democratic standard-bearer. A Walker/Warren election would offer Americans the clearest choice for president since Reagan ran against Carter and then Mondale.

And, if Walker loses in Wisconsin, Scheiber believes Republicans will be “chastened” and might tack even further to the right. Who knows if that’s true, but at least Scheiber is writing with an urgent passion and that makes his articles, unlike Bruni’s, worth reading.