Something very bad just happened to the Gettysburg Address. 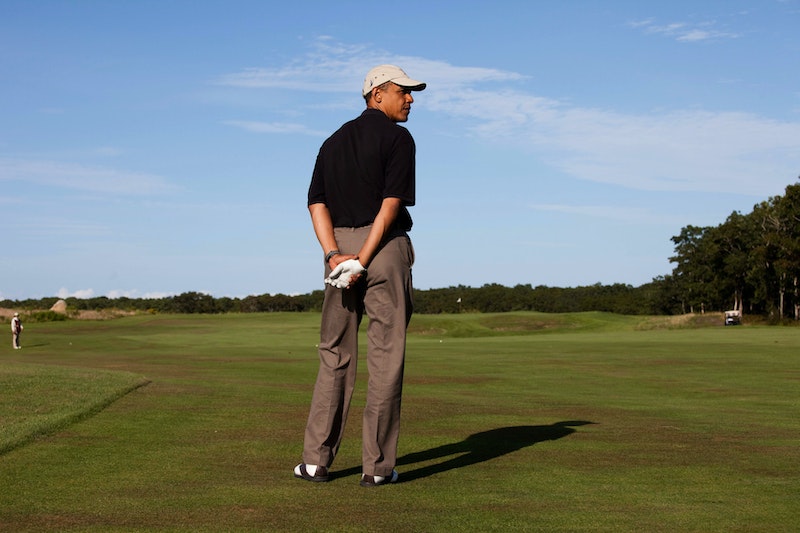 Playing golf just then was a bad idea. It showed disrespect to a dead man and was dreadful public relations. Going to a party was a bad idea; it looked like callousness toward the victims of a racial disaster, and it was dreadful public relations. There you have the hard, irreducible lump of conventional wisdom (correct conventional wisdom, in this case) around which Maureen Dowd has frothed her latest column, “The Golf Address.”

She's giving it to President Obama for staying out of Ferguson and golfing right after he made his statement about the assassination of James Foley by ISIS. The piece is supposed to play off the Gettysburg Address, with Obama telling us why he ought to spend time golfing and having fun instead of thinking up things to do that will show us he's tackling the crises of the day. Lincoln consecrated our war dead, Obama doesn't know there is a war—I think that would be Dowd's summing up if she were forced to sit still and say what she meant. Of course, if she did that she'd run the risk of people pointing out that we don't have a war in Iraq or Syria. Instead she falls back on her magic driver, word play.

Here's where the Gettysburg Address does service. Jerk around familiar phrases and you have a joke, or something that is recognizably meant to be a joke. The Address is swarming with old familiars, and all Dowd has to do is just... well, she does dreadful things: “The brave foursomes, living and dead, who struggled here in the sand, in the trees, in the water, have consecrated it, far above our poor power to add or subtract a few strokes to improve our score.”

I read the column and then, gingerly, hand tilted over eyes like a visor, skimmed it again. First time out I saw no point that somebody else hadn't made before, no bit of information that wasn't already known. But the second time I noticed this: “Now we are engaged in a great civil divide in Ferguson, which does not even have a golf course, and that’s why I had a 'logistical' issue with going there.” Are there really people who claim that Obama wouldn't go to Ferguson because he couldn't golf there? Some wingnuts, all right, but the people who decide what chatter in Washington is respectable and what isn't?

Any adult knows that Obama won't go to Ferguson because many whites get scared when they catch their black president acting like he sees things from the point of view of the loud, angry black people who make trouble about the police. Five years ago Obama made some truthful and ill-tempered remarks about how an officer had treated a black friend of his; the result was days of wasted time as everyone clamored about the rights and wrongs of the situation, until finally Obama's people had to stage a White House event where the officer and the friend could lay matters to rest. The president isn't going to put his face near the scene of a black-white racial standoff.

Too bad a black president has to play it that way, but those are the rules Obama decided to live by. He can be criticized for that choice or pitied or possibly respected, and the rules themselves certainly call for notice and some thorough discussion. Instead Dowd has her mingy little jape about Obama needing a golf course in Ferguson if he's going to show up. I don't think Dowd even believes the line; Obama would have to be a skunk to be that low. Dowd was just trying to be funny. But she lurches into remarks like that because she has the clumsiness of people who shouldn't make jokes.

Even the title is a dud. “Golf Address” doesn't sound like Gettysburg Address. The alliteration is nowhere near enough to make that link, not when “Gettysburg” has three times the syllables as “golf,” plus a set of s's and light vowels that tie it in with “address.” Whereas the hard plonk of “golf” lands next to “address” like the wallop of extra-heavy bird droppings. Anybody can hear this. It's not just that Dowd can't, as if she were missing out on some flick of a nuance that E.B. White or Dave Barry would have nailed. Anybody can hear it except Maureen Dowd, New York Times columnist. She's defective.

“The world will little note, nor long remember, what we shot here, or why I haven’t invited a bunch of tiresome congressmen to tee it up. I’m trying to relax, guys. So I’d much rather stay in the bunker with my usual bros.” The country's best-known newspaper published the above passage by its most popular columnist. Nobody in charge thought that its incompetence was a problem. There are many reasons for Americans to feel scared right now, and one of them may be that the President is too bleary to know when he's putting his foot wrong and being an ass. But another is this: We live in an age where Maureen Dowd is treated by people who count as if she matters.