Legal limbo is a place you flee. 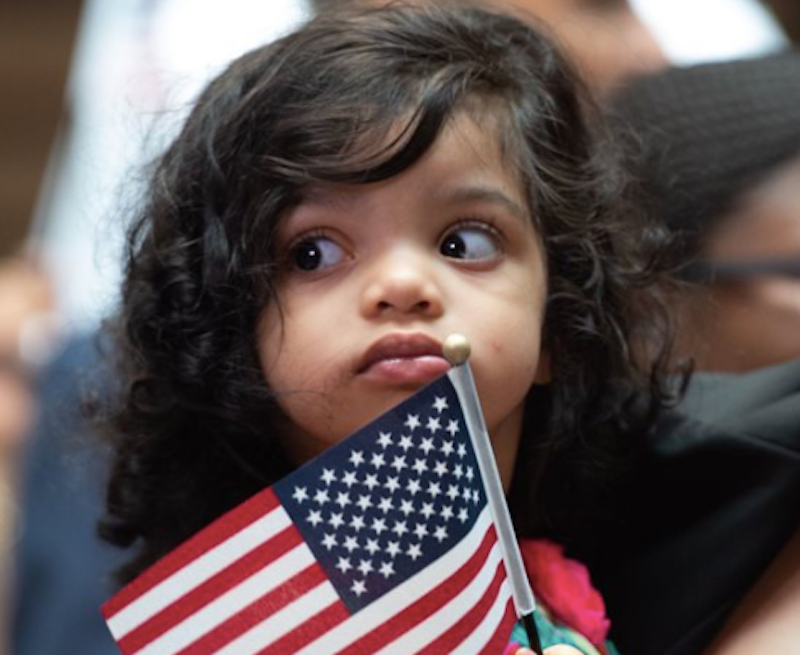 Ironically, I met Michael Anton, chief proponent of Trump’s plan to end citizenship-by-birthright, in a distant foreign land—Hong Kong, 21 years ago (a very accommodating P.J. O’Rourke also bought me a drink during that short trip, and I hadn’t even known he was in town until I spotted him in a bar). As is so often the case, though, even a piece of empirical evidence as striking as Hong Kong yields different lessons depending on what the observer wants to see.

I could well imagine Anton saying, reasonably enough, that Hong Kong is the perfect example of a tiny place that has to have strict immigration controls, without which it could easily be swamped by an immense tide of (socialist) refugees from the mainland. On the other hand, I can’t help recalling that Hong Kong as we know it wouldn’t exist in the first place without the wave of (entrepreneurial) refugees who fled the mainland when the Communists took over. A similar story—about everyone wanting to be the last person aboard—could be told about the U.S.

At the very least, the strikingly different fates of mainland China and Hong Kong (or Taiwan) should be a reminder that differing legal codes can have vastly different consequences without any relevant difference in ethnicity or genetics. Just look at the histories of West Germany and East Germany if you doubt that, not to mention North and South Korea. Generally speaking, the more people living under the good law codes, the better, right?

There are certainly times, as with estate distribution, that the law must take genetics into account in the very narrowest sense, but that shouldn’t be an excuse to start using the law for complex eugenic or demographic social-engineering experiments—which are as unlikely to yield nuanced, predictable, good results as any of the economic planning governments struggle in vain to do.

Anton may be veering in a populist direction nowadays but was still very much in the more elitist West Coast Straussian camp back in the 1990s (that bunch is a little bit paleo and a little bit neo, to put it in conventional conservative terms). The Straussians, mindful of how often great thinkers of the past had to write in veiled language to avoid persecution, strive to be scholarly and careful readers, but they may also be prone to paranoia. They’re always looking for subtext, after all. That doesn’t translate into populism for most of them—more likely elitism—but it may mean that if you say something straightforward to them, like “I would like to settle here and work in my cousin Juan’s convenience store,” they may imagine they’re hearing a cryptic message more like “Your sovereignty means nothing to me, and I shall subvert your culture.”

Not that people never say or do things like the latter, but: innocent until proven guilty, with only the tiniest of emergency footnotes to that principle (plague control, barring people from entering a battle zone, catching at-large criminals, etc.).

Another very basic principle of law, one as old as Hammurabi and more basic than any of the policy disputes that have occupied us in the millennia since, is that the law should be clear, coherent, and publicly announced. Anytime people find themselves living in fear because they aren’t sure whether, without even intending it, they’ve ended up on the wrong side of the law, it’s probably a sign the law is bad—and cruel.

For instance—and no matter what I say on these topics someone is going to misinterpret me and get angry, but so be it—I could imagine a humane, principled argument being made (back before 2015) against the government issuing gay marriage licenses (though never for forbidding private ceremonies). I’m not saying I’d ultimately be persuaded by the argument, but I could imagine it being made in a traditionalistic, non-hateful fashion. But when, in reality, we reached the ugly point where some people in California were married and then suddenly unmarried again and finally confident they were married once more after a Supreme Court decision, one had to suspect that the cruelty of, well, jerking people around outweighed any purported humane benefits from putting the state’s imprimatur only on traditional, reproduction-prone relationships or what have you.

People deserve to know where they stand. So it is with immigration.

That is, I can imagine a humane, well-intentioned set of immigration laws aimed at vetting people from high-crime or frequent-terrorism zones more thoroughly than people from the rest of the world, maybe even tracking them after prompt and efficient entry-processing. But we’re a far cry from that, with countless bureaucratic hurdles to be jumped—over the course of years in many cases—by even the most harmless and employable of would-be immigrants. As with most onerous regulations, you end up with people pursuing other, less legal options for getting what they want. In effect, you get a black market in immigration where there could’ve been simple, clear rules most people would obey. Next you get the heavy-handed and largely futile crackdown on that black market—and all the horror stories about how surprisingly seamy and secretive and dangerous that black market is, as if the law itself weren’t largely to blame.

And cruelest of all, when the autocratic dope currently in charge of it all decides he may (try to) decree the revocation of the citizenship of people born in the U.S. to non-citizens—if that were ever to be the implausibly-broad wording of such an executive order from President Trump—you get results such as one of the most patriotic Americans I know now wondering whether she could end up one day soon with her citizenship stripped away even after living in the U.S. since she was born here over 50 years ago, since her parents were legal residents who were themselves immigrants (again, legal ones) but not citizens.

How many hundreds of thousands of “former” U.S. citizens—ones who were born and raised here and never before at odds with the law—might find themselves shipped to a foreign land if Trump proved too inattentive to bother splitting that hair? Michael Anton has said pretty clearly that his notion of such an executive order was merely one that would avoid rewarding parents who were flouting the law by being here, not one that would punish the children of legal residents. Will Anton’s boss be as hair-splitting and careful a reader as Anton, though? Populists can be much sloppier than aristocrats and hurt people in the process, and Trump’s given little assurance he understands how routine it has always been for U.S. citizens in good standing to be born to residents who are in compliance with all relevant laws but never became citizens.

Will it take a few rich, prominent, well-behaved, middle-aged children of Swedes being deported to remind him how complex all this gets and that it doesn’t just affect Mexico?

I won’t weep for a lost GOP majority in Congress if crushing innocents in more bureaucratic immigration red tape is their idea of a populist priority.