We need a lot more than condescending celebrity singalongs. 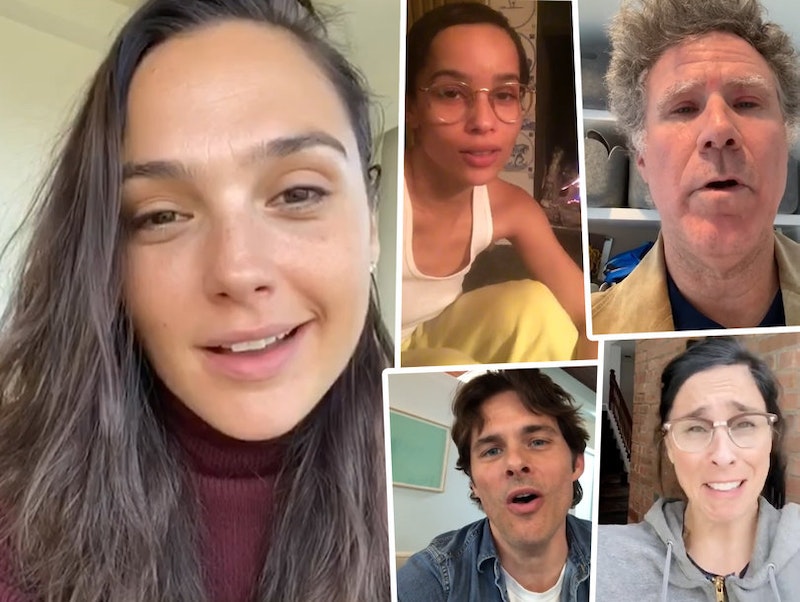 Actress Gal Gadot recorded a video in which she and a bunch of celebrity friends like Natalie Portman and Mark Ruffalo sang an inspirational song to cheer people up during the coronavirus pandemic and associated social isolation and economic collapse. Many critics quickly rushed to mock Gadot's off-key rendition. I'd like to take a minute to dump on the song she chose. John Lennon's "Imagine" has always been terrible.

"Imagine" was originally released in 1971, with full overblown Phil Spector muzak production and Lennon's voice drenched in unnecessary echo effects. The repetitive keyboard hook is as ostentatiously glib as the worst work of Lennon's Beatle co-writer Paul McCartney, and the string section saws away with sententious sentimentality. The tune is simultaneously pompous and simplistic. It's no accident that Gadot decided this was the song that would best project her irritating smugness to the world.

And then there are the lyrics. Inspired by his wife Yoko Ono's poetry, Lennon wrote a paean to the liberating and pacifist potential of atheism. "Imagine there's no heaven/It’s easy if you try/No hell below us/Above us only sky/Imagine all the people living for today," he warbled.

I'm aware that Christians, and proponents of other religions, have done terrible things to each other over the centuries. The Inquisition, the Crusades, the genocide of native peoples in the name of conversion, and the white Christian evangelical nationalist fervor that helped elect Trump so he could set up concentration camps at the border. If you were an atheist and committed to puffing yourself up, you could look at the sins of religion and convince yourself that without heaven we'd all be at peace.

But the record of actual atheists who don't believe in heaven isn’t great either. Stalin's atheism didn’t make him non-violent. The new atheist rationalism led by Richard Dawkins, Sam Harris and Christopher Hitchens is characterized by rabid, militarist Islamophobia and enthusiastic support for various wars in the Middle East. And John Lennon was not the shining icon of anti-saintly virtue his song suggests. He was a negligent father and an unfaithful and abusive husband to his first wife. And though she inspired his anti-war activism and embrace of social and political causes, he didn't treat Yoko Ono especially well either.

Lennon's song "God" from his Plastic Ono Band album is a much more effective anthem. The music is raw and trudging, and Lennon sounds like each word is being torn from him as he hoarsely sing/screams that he doesn't believe in Jesus, Kennedy, yoga, Elvis, or the Beatles. "I just believe in me/Yoko and me." The song is a personal assault on his own idols and gods, in an effort to strip away the inessential and find what actually matters to him. It's solipsistic, in the way of all confessional art. But it's also abrasive, off-putting and mean. If you're going to go after God, the least you can do is bring a little hellfire.

"Imagine," though, has no hellfire. It congratulates its audience on their snug (lack of) beliefs. It asks people to imagine a better world, but does so without demanding either rigor or much imagination. If "Imagine" really challenged the comfortable, as it pretends, the comfortable wouldn't be so eager to sing it, off-key or otherwise.