He loves to associate with things that look tough and decisive because he’s not. 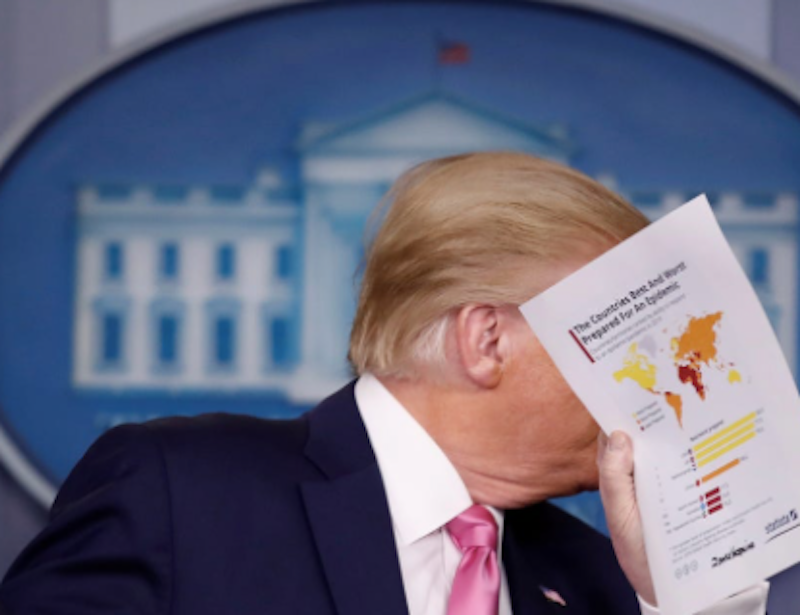 Agree with him or not, John Maynard Keynes is an important economist. He once wrote, “We were not aware that civilization was a thin and precarious crust erected by the personality and the will of a very few, and only maintained by rules and conventions skilfully put across and guilefully preserved.”

This statement currently applies to the United States. As a Canadian, the US has always had an appeal. Most of us live within a couple hours drive of the border and often cross it to go shopping for, of all things, groceries. Last year, we made over 43 million trips across the border and there are only about 35 million of us. Some of us really like American groceries. We rationalize these trips by saying the groceries are so cheap. But really, we just think it’s cool to go to the US. And it is. But, I fear a historic disaster is looming in the US and Washington doesn’t have the wisdom, personality or will to maintain the thin and precarious crust that holds it together.

Trump’s bumbling administration is fighting everything while defending nothing as the US faces a clear and present danger in the coronavirus. The war analogies are appropriate here as Washington begins to think about fighting this invisible foe that no one in the White House expected despite its deadly romp through China, Iran and Italy. Military analogies particularly suit Trump, who as a self-serving youngster managed to side-step military service using a fake medical certificate about his bad feet. Now, Trump’s referring to himself as “a war president.”

When draft-dodgers or those whose military service doesn’t bear scrutiny, grow old, they often become warmongers, bombastically cheering on the young to wield the big stick they’ve pointed at their whole cowardly lives. Trump’s known for his tough talk, flamboyant displays and love of military (and first responder) parades. He loves to associate with things that look tough and decisive because he’s not.

As the coronavirus spreads and the three largest cities in the US are under “stay-at-home” orders, the self-proclaimed “War Leader” has girded his loins to defend America. But Trump can’t fight a war against The Virus or Fear itself. During the first two weeks of the epidemic in the US, Trump dismissed it as a hoax overblown by the shark-like media constantly circling him. Now that the hoax has become as real as the fear accompanying it, Trump has warned that the virus was very dangerous and likely introduced by foreigners. He’s attacked reporters for asking nasty questions about what he’d say to comfort scared people. This question wasn’t a Nolan Ryan fastball coming at his chin; it was a lob thrown by grandma at a church picnic: What would you say to people who are scared?

Dust off a couple of Fireside Chats and tell people it’ll be a struggle overcome by cooperation, looking out for and helping each other. But Trump can’t do this. The mere mention of the word “scared” both infuriated and petrified him, who, true to form, reacted like a grade-three bully.

What has the Trump White House been doing while other world leaders sought to re-inforce civilization’s veneer? They were busy poking Iran, instigating a little altercation (air war) that’s perfectly suited to deflecting criticism and scapegoating; wading through the ever-deepening political swamp in Washington while ridiculing the Democrats’ primaries; and studying polls of their own remarkably solid base. Being so busy, is there little wonder they totally missed the coronavirus when it kicked in the door to continue its global romp in the US?

Actually mobilizing the US to defend itself against The Virus wouldn’t be hard. The US can stock and restock, at will, over 800 military bases around the globe and 440 in the continental US. Yet there aren’t enough face masks, hospital beds, ventilators, or respirators to accommodate the tsunami of sick Americans that’s coming. The US has a trillion-dollar military budget. Yet, there isn’t enough money to buy some “just-in-case” medical supplies? If there was an actual biological attack against the continental US would those supplies suddenly appear or would people have to start peeing into their handkerchiefs like soldiers in the WW1 trenches?

Trump, ever anxious to polish his image treated The Virus like a political issue; something to be manipulated with Norman Vincent Peale-like positive thinking. While Trump has now taken responsibility for all aspects of the Virus Crisis (which could easily backfire on him if things go bad) he hasn’t actually done very much. Much better examples of American leadership exist and need highlighting: Gavin Newsom, the governor of California, has confidently managed the crisis while assuring those Californians who are scared. Illinois Gov. J.B. Pritzker, despite ignoring social-distancing and putting many at risk by irresponsibly allowing the Illinois Primaries to proceed, announced a statewide stay-at-home order aimed at stopping the spread of coronavirus; time will tell if that was too little too late. Chicago Mayor Lori Lightfoot has clearly stated this isn’t a lockdown or martial law, the grocery stores will remain open and stocked and asked Chicagoans to be “mindful of your neighbors and do not hoard.”

Simple instructions calmly given are the key to providing leadership in a crisis. Yet Trump has failed to provide this and Americans are looking to Washington for it. The Social Contracts states that people will accept and support a government’s rule if that government provides them with services and protects them. To protect and assure America, FDR-level leadership is needed, but Trump isn’t one of the few with the personality and will to do so. So Americans look to their governors and mayors for it. And what happens to the nation then?