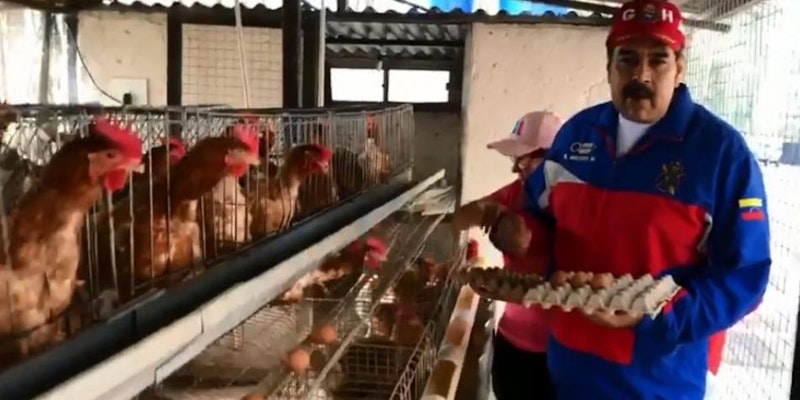 I’m in the thick of it in Venezuela. I’m handing out rations, finding food, distributing it amongst the locals. The right ones, the people who deserve to eat. Who am I to discern, you may ask? An employee of Mr. Maduro, thank you very much. I’m working for a government endorsed by such prominent American leftists as Boots Riley and Noah Berlatsky. Rose emoji? Please. I’m made of roses, honey. I’m a socialist now. I live in a commune, eat on the ground, share toothbrushes and towels, soap my comrades up and down.

It’s so hecking lit to be surrounded by like-minded socialists who hate money and love cocaine. Yes I live on a commune, yes that commune happens to be located inside a palace. Problem? Caracas is so crazy, and honestly, I don’t have any idea what’s going on down there. I hear people are making street art out of dollar bills? That seems stupid. Don’t they want more money or something? Sounds like they’ve already got it and don’t know how to use it. Food? Medicine? C’mon. Just go to the supermarket and the CVS and flash some bills, because what you’ve got now? This ain’t it, chief.

Guaido’s a chump. His forces are fake news. Those people marching in the streets, chanting his name and calling for Maduro’s head? That’s CGI. Don’t believe everything you read. Let me tell you everything awesome about living in a socialist utopia like Venezuela under Mr. Maduro: we’re all friends. We all share. We all have the same STD’s and our menstrual cycles are aligned (yes, males menstruate. Oh, you didn’t know? Not very inclusive of you. Do better).

I haven’t eaten anything but hair and ants for the last week and I feel great. Do I have mange? Yes, but that was contracted back in the States when I helping El Chapo escape. Did I just incriminate myself? Yes, on purpose, so that when—I mean if I’m captured or killed by the fascist American coup I’ll go down an honest bird.

Do not trust the Gringo Empire. All they want is our oil and our recipes. They don’t have our interests at heart, and besides, President Cheetard is for the coup. Don’t you all hate him, reflexively? This should be an easy choice. Anyway, I have to get going. I think I just heard my girlfriend scream downstairs. Oh, I forgot to mention that we’re all about free love. Maybe that was implied in the STD bit? Well, we all love each other in here, and no, it’s not at all a desperate bunker situation, we’re doing JUST FINE.

Sounds like bullets downstairs though, and we ran out of those months ago. I should probably go check on everyone. Eh, I could also just swipe the jewels in the bedside table and emerge as a reverse double crosser. Might as well. I miss Massachusetts, I miss my family, and I miss clam chowder. Might fuck around and start a war later, who knows. For now, I gotta grab these jewels, some coke, and a satchel. Viva La Revolución!