If You’re Happy and You Know It

It’s swell to be Kamala Harris. 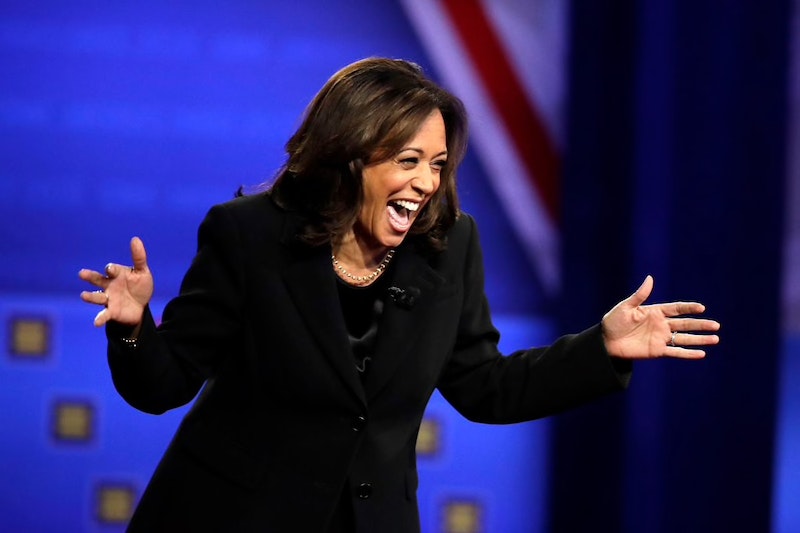 Hey, champs, let’s get angry! Choose a topic, no matter how picayune, and wail away! My friend Emma is running an anti-cicada campaign on Twitter—along with her persistent jabs at lame-duck Maryland Gov. Larry Hogan, who, as is still said in all seriousness by serious political commentators who consider themselves “serious,” looks in the mirror and sees the 47th president, even though he’s white, fat and bald, a tough sell for Republicans (but not Democrats, for they’re God’s children—and I must quarrel with that line of thought.

Gee whiz, the insects only appear every 17 years (talk about measuring one’s mortality, especially if you’re in the demographic who remembers Bob Dylan chirping about “the locusts [singing] off in the distance” when he received an honorary degree from Princeton on 1970’s underwhelming LP New Morning, considered a do-over from that summer’s unfairly maligned Self Portrait) and though they’re kind of ugly that pales next to the sublime hymn to the Lord they provide, a background noise that’s like a benign air raid siren, or, if you’ve got a trained ear, something akin to “Beck’s Bolero” or “Battle Hymn of the Republic,” without the nasty God and violence shit. It rained all of last weekend in Baltimore, and the cicadas retreated, leaving me to worry that their stay might be aborted. But on Monday morning, the sun finally shining, the lovely “racket” returned and that put an Irishman’s bounce in my step.

I’m not a fan of Vice President Kamala Harris, a cipher for whatever cause or issue she thinks might benefit her career—really unnecessary, since she’s waiting, not so patiently, for Joe Biden to step down; which, who knows, might not happen for another year, but it’s hardly a Queen Elizabeth/Prince Charles (who, in turn, is relishing his eventual reincarnation as Camilla’s tampon) situation—but the conservatives and a few liberals who blasted her for a tweet last Saturday that read, “Enjoy the long weekend,” omitting any mention of Memorial Day, are out of their minds. What’s the fuss, my fellow Americans?

The holiday—for that’s what it is, demeaned even further when it joined other such days that were moved to Mondays in the early-1970s, so that Americans can, in fact, “enjoy a long weekend”—has for the majority of my lifetime turned into an opportunity for excess commercialism, and not just car dealerships and furniture stores. I received an email from Vanity Fair on Monday, the header of which read: “Time is running out on our Memorial Day sale. Get one year for $8!” No sale, Elmer Fudd: I stopped subscribing to VF 15 years ago.

As a kid I don’t remember much solemnity about the day dedicated to the fallen military men and (later) women who perished in all the wars the United States has engaged in. There were parades and cookouts across the country, and I was just happy for no school and that my dad took a rare day off from his car wash. Stretching my mind for hazy images when I was four or five, I do vaguely recall that my parents hung an American flag (48 states) on the house shingles outside—and probably did with more conviction during WWII and the years following—but soon after it was consigned to the basement, and got all moldy from the semi-annual floods, when my brothers and I put on galoshes and waded in the water—regrettably, not harmonizing with Ramsey Lewis, several years too early—to rescue items that were beyond rescue (fortunately, my dad’s collection of jazz 78’s were kept in the ladder-up attic, along with other memorabilia from earlier decades).

But that was beans compared to the cuffing Harris received in a May 31st editorial in the unfortunately online-only New York Sun, which whipsawed the Veep for her “atonal” speech at Annapolis’ commencement ceremonies last week. (Harris’ tweet about the “long weekend” was the object of far more magnitude than the Sun’s edit, just another reflection of today’s mindset that a 55-second TikTok post takes too long to read.) During its short-lived print edition, I often contributed to The Sun—and respect both Seth Lipsky and Ira Stoll—and look forward to reading its articles (save those of Conrad Black), but I fear the website, at least on the Harris criticism, is stuck in a time warp.

An excerpt: “The ‘threats’ Ms. Harris spoke of were climate change, infectious disease, and ‘criminal hackers.’ In her politically correct condescension she failed to mention even once the threat from, say, Communist China. What an oversight, particularly at Annapolis. It is to the Pacific that so many of our newest ensigns are headed, and it is China who will meet them there.”

The editorial writer is correct that Harris’ remarks were dashed off (my words) and is probably basically the same speech that she has, and will, made at any number of graduation ceremonies. I agree that speaking about solar panels is frivolous—and one might, and should, say insulting—(but a good soldier’s nod in obeisance to the savior of souls known as the Democratic Party) at a military college, but does The Sun really think that more than a few graduates were paying attention to Harris? Most likely the men and women—just like students at other institutions when subjected to windy speakers—were celebrating, looking forward to that night’s revelry (and that’s what you call a euphemism!), without a thought of climate change, politics or solar panels. Such appearances at this time of year simply don’t carry the gravity they once did, and even though the edit noted that five years ago then-president of Harvard University, Drew Faust, the woman who brought back ROTC to the school, spoke in soaring rhetoric at West Point’s commencement that “We need you, now more than ever,” that was likely an exception.

In my experience, these festivities always blew. The featured guest at my own college graduation in 1978 was President Jimmy Carter’s buddy Admiral Hyman Rickover, and man, he meandered and then some (perhaps in retaliation for the equally-windy Johns Hopkins Marxist professor who preceded him) for about an hour, and I nearly fell asleep. I can’t think of a single relative or friend who was ever jazzed by a commencement guest, and, in retrospect the cap and gown costumes were pretty corny. And throwing the tassel to the side once the diploma is received? Forget about it, man, I’m going outside, and wherever cicadas go, I’ll follow them.