Michael Wolff and His Peculiar Mission 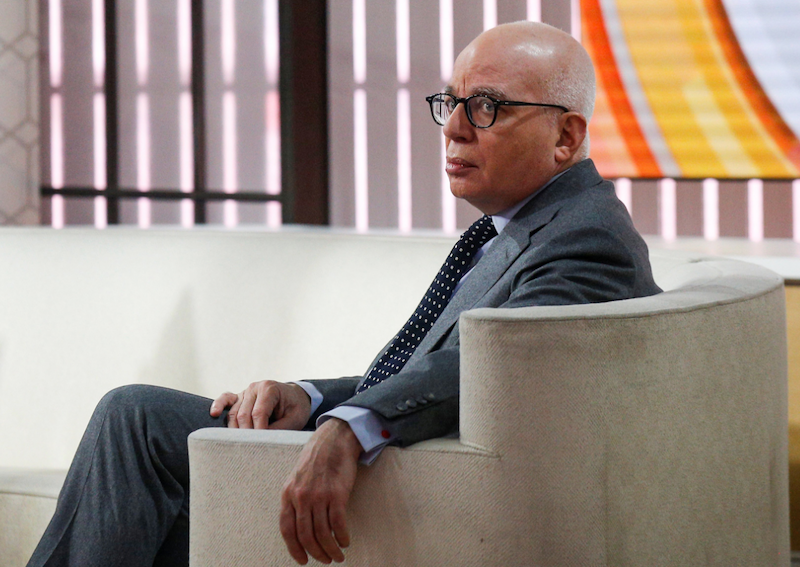 Michael Wolff is frank about his time in the West Wing. “You never got food there,” he tells The Hollywood Reporter. All right, he says, now and then “you would get a little something.” But that’s it. “It’s not at all a commodious place,” Wolff says. “So they’re always having to move a coat off the seat or brush the crumbs off a couch so you can sit down. And then you might get a diet soda.” This is very decent color. Further, it’s proof of Wolff’s chutzpah. No snacks, says the guy who invited himself.

By his own account, Wolff found a couch in the West Wing’s anteroom and there he stayed. When people could talk to him, they talked. When they couldn’t, they didn’t. In the meanwhile, he hung out. The dry spells might last a week, him sitting on the couch and people running past, busy with a crisis. But everybody knew Wolff by his first name, and he stayed in sight until somebody had something to tell him. He’d get down what they said and then wait for the next person who wanted to talk. Finally, he dumped everybody’s monologuing, venting, and score settling into his new book, the notorious Fire and Fury: Inside the Trump White House.

Wait, note the phrase “until somebody had something to tell him.” I introduced that. Wolff didn’t say that his dry streaks ended because a passing staffer wanted to talk. Now, thanks to my retelling, it sounds like Wolff did say so. Further, it sounds like the staffer might see Wolff and pull him into an office, ready to go then and there. I bet I’m right about all that, but my bet shouldn’t become Wolff’s testimony. This snag shows us a pitfall of the Wolff method. Wolff the reporter tells us what others told him, and he leaves his job at that; documents and the like don’t enter into it. We have what somebody (Wolff) says that somebody (a Trump staffer, with or without name) told him. But retelling can change a story, as I changed Wolff’s. Luckily, I labeled what I did. How good is Fire and Fury about labeling the bits in its flying storm of facts, claims, and conjectures?

As we try to get that question answered, The New York Times and The New Yorker weigh in. First, The New Yorker wants us to know that Wolff, the outsider, didn’t understand Washington. Ivanka’s breakfast at the Four Seasons? Susan B. Glassner shakes her head. Wolff “missed out on what I thought was the morning’s most telling vignette: when Ivanka Trump finished breakfast and table-hopped,” she writes. Glassner was there and she’s pretty sure it was quite something. Ivanka made conversation with some Clinton people, who were polite back. Glassner, breathless: “Here was the literal, actual moment when the purportedly moderate Ivanka met the Beltway establishment—and it appeared as though the city might yet find a way to do what it does best, which is accommodate itself to power, even of the most unlikely sort.” Glassner concedes that the moment came to nothing, since Trump doesn’t typically adopt policies backed by his daughter. Still, it was a moment.

Jonathan Martin, who covers national politics for The New York Times, takes a firm line. Reviewing Fire and Fury in the Sunday Times, the reporter puts his thumb on three key points. The Trump Tower meeting, President Trump’s statement on that meeting, and the Comey firing—with each of these events, Martin says, Wolff “throws up his hands.” Wolff’s book presents different theories about the Trump Tower meeting and doesn’t say which is correct. As for the statement and the firing, where were Jared and Ivanka? Were they in the room or had they escaped? The book never says. Instead Wolff tells us what people told him: “Jared, in the telling of his team,” “Ivanka, according to the later recollection of her team,” “in the version told outside the Jarvanka circle.”

In presenting all this, Martin begins with “Unfortunately for the reader.” Why “Unfortunately”? He doesn’t say. If Martin thought Michael Wolff would figure out Trump Tower, he must also think that Bob Mueller is incredibly overpaid. Wolff served as a bucket for office gossip, a bucket dipped into the center of the Trump administration. Yes, he has a lot of explaining to do. (Exactly where did a given hair-raising anecdote come from? How clearly are the conjecture bits labeled as conjecture?) But Martin singles out three cases where his target was being responsible. If somebody was telling me scuttlebutt, I’d want that person to remember who said which bit. I’d also want that person to realize what scuttlebutt isn’t good for, such as settling historical truth. Going by Martin’s examples, you’d think Wolff did all right.

Instead of dissecting Fire and Fury, Martin demonstrates that he doesn’t know the book’s purpose. Glassner of The New Yorker can’t get over seeing Ivanka talk with Ben Rhodes. Wolff is said to look down on the respectable reporters at the top of big media. So far it seems like he’s on to something.