It's nice to see people get along. 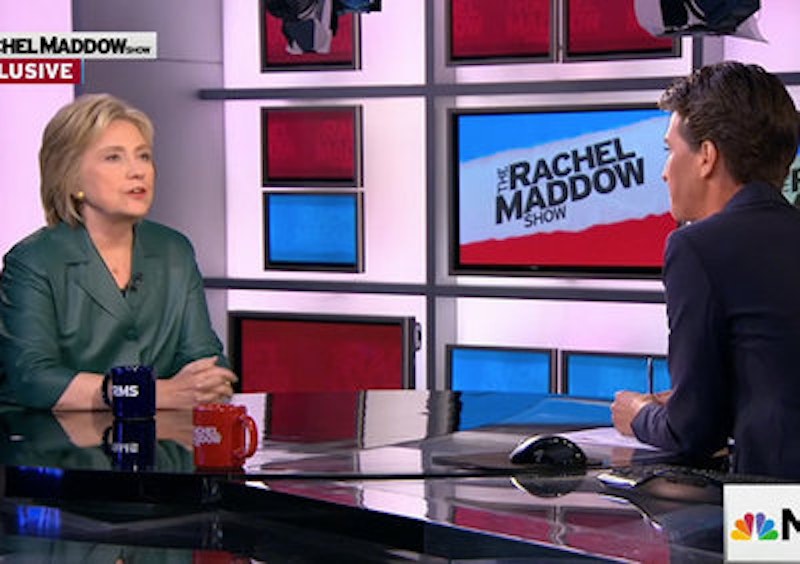 Hillary can take a question about Mark Penn and Lanny Davis and make it a campfire moment. “You know, I am like the old Girl Scouts song,” Clinton says. “You know, 'Make new friends, but keep the old, some are silver, the others are gold.'” She lets the last bit trip off her tongue. She's tickled to have the old rhyme still available and she hitches forward as she says it; she's sharing the nostalgia with MSNBC’s Rachel. I don't think Rachel Maddow was in the Girl Scouts. Maddow's game, but she seems to witness the moment more than take part in it.

With Clinton so chipper, the question shrivels up and disappears. But it was a good one. Rachel wanted to know if Hillary was going to keep her old gang of desperadoes. “And that is one thing that I worry about,” Rachel said, “about the prospect of you becoming president. About Sidney Blumenthal and Lanny Davis and—and Mark Penn and all of these guys that you guys have known and worked with for all this time thinking that they’ve got—they're back at the table.”

Rachel had to slog toward this question through 240 words of preamble. When she finally said “And that is one thing that I worry about,” it was like sighting distant land in a marsh of throat clearing. Along the way she reflected on how a Penn or a Blumenthal could end up so rotten because of always fighting the Clintons' enemies, and she discussed a Jodi Kantor article in the Times that said the Obamas didn't let their girls make new friends after hitting the big time.

Hillary's answer was mainly about this last point: new friends or no? “Well, first of all,” she said, “you know, because we’ve been in public life for so long, we’ve made a lot of new friends over the years.” Rachel jumped in. “There’s no 'no new friends' rule?” she asked. Hillary (warm): “There’s no new friends rule at all, and there certainly is no new advisers rule, no new ideas rule.” This open-hearted woman was well on course for the gold threads and silver threads, and from there she proceeded to the subject of woman pals who bucked her up during the Benghazi hearing. “They see something like yesterday, with eleven hours, and they’re, you know, emailing me like crazy, like, 'Get a massage,'” Hillary said. She never really got to the desperadoes and their being at the table.

After the interview, Rachel is aflutter. “That was a very uncomfortable question. I felt just as a person a little bit uncomfortable asking her about her friends being sort of creepy seeming,” she says to Andrea Mitchell. Mitchell replies carefully, “I think she was trying to absorb it and take it in and”—a very abbreviated wag of the head up and to one side, then an almost as abbreviated wag down and to the other side, with an apologetic smile—“she responded indirectly.”

Rachel doesn't say anything about helping Clinton redirect the question. That's a big thing to forget, as TV incidents go. When Maddow asked why Bill signed that law saying marriage was just between a man and a woman, Hillary gave her a story about heading off a constitutional amendment. Rachel hung back and let Hillary's story go by without challenge. That's the no-muss approach to letting an interviewee off the hook: ask the question, then take whatever they give you. But actively helping the person boot the question away—that's unusual.

Before we got to the segment with the desperadoes question, Maddow told us a couple of times how uneasy it made her. “When we get back,” she said, “we have my last exchange with her, the aforementioned uncomfortable exchange, and also some perspective on why it might have been so uncomfortable, some perspective from a reporter who has been covering Secretary Clinton for decades.” Followed by a taste, a clip of Hillary waiting while Rachel says, “You—do you hear that criticism—does it make sense? I hope it doesn’t sound mean.” This was supposed to keep people viewing.

The openness of it gets me. Rachel broadcasts that she's squeamish about asking Hillary a particular question that she's about to ask. This doesn't tell viewers that Rachel is a weak interviewer; it tells them how hard the question is. Then we're supposed to clap her on the back for getting the question out, never mind the answer. I don't say it's news that Rachel Maddow would give Hillary Clinton an easy time. But apparently viewers accept this mini–soap opera about the tremulous Maddow braving the awful topic. This substitutes for actually getting an answer to the question, and to viewers the swap feels quite natural. I don't know what to make of all that, but I think it's new and I bet it's no good.