It's like All About Eve if the dialogue were really no good. 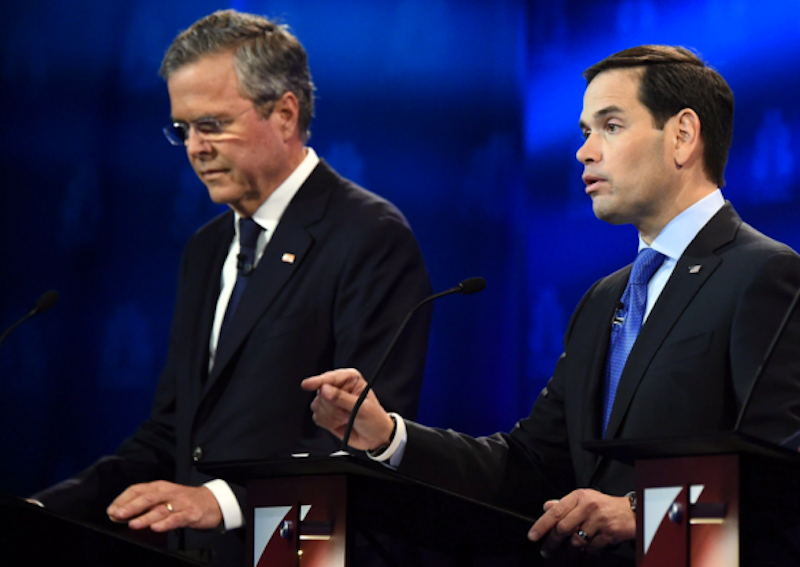 This is Jeb's death blow, isn't it? “The only reason why you’re doing it now,” says Marco Rubio, his ex-protégé, “is because we’re running for the same position, and someone has convinced you that attacking me is going to help you.” They're talking about the Senate votes Rubio missed. The moderator brought it up, and then Jeb chimed in to say, yes, Rubio ought to be better about attendance.

Rubio said Jeb never worried about a senator's attendance before, and he continued with the quote above. The quote has the feel of something a turncoat character might say in a cartoon show when trying to mess up the minds of the good characters. It's smarmy. Even so, the effrontery is beautiful: “Someone has convinced you that attacking me is going to help you.” In effect, Rubio wipes Jeb's chin and gives the dope a push-pat on the breast pocket. He sends Chumpuss shuffling back a few steps, that poor cluck, that docile man-creature.

“Well, I’ve been—” says Jeb. The three syllables come off like each is a fresh try at a sentence that will never form. They're words, but barely. He might have been saying “Eh,” “Uh” and “Oh.”

Now Rubio is talking to the camera. He confides that he isn't running against anyone. “I will continue to have tremendous admiration and respect for Governor Bush,” Rubio says. His voice has a throb, not powerful but there, and he's got the words coming out firm and bobble-free. His gestures are there too. Rubio is exercising what's known as his oratorical gift, and it involves powerful quantities of earnestness. His brown eyes fix the camera, and his thumb bobs in the politician-making-a-point style that marks a debater on a roll. “I’m running for president because there is no way we can elect Hillary Clinton to continue the policies of Barack Obama,” he says, voice firm as he rides over Donald Trump's attempt at commentary. ('I don't think these two like each other,” Trump finally got out, to not much attention.)

The donors had been saying Jeb was up against it. The third debate had to give him a standout moment. There was the moment: Jeb's one-time protégé turning him into Chumpuss. I wonder if this is when the donor class decides that Jeb really isn't the guy and they want Rubio.

After Rubio's one-two of diss and aria, Jeb seems plump and cheerful enough as he takes a question about know-nothingism. “The great majority of Republicans and Americans believe in a hopeful future,” he says, and he rackets along with his high voice: “Washington is dysfunctional,” “lids on aspirations,” “compelling alternative.” He doesn't seem embarrassed. He was just turned into a stooge by that dramatic little insurance salesman. But he still thinks everybody ought to hear him. Possibly that shows a kind of strength, and possibly his brain is over-insulated against reality. We'll never know, because pretty soon it will be a question nobody cares about. All right, maybe it is already.