Death of a Nation

Black leaders arise in time for the end. 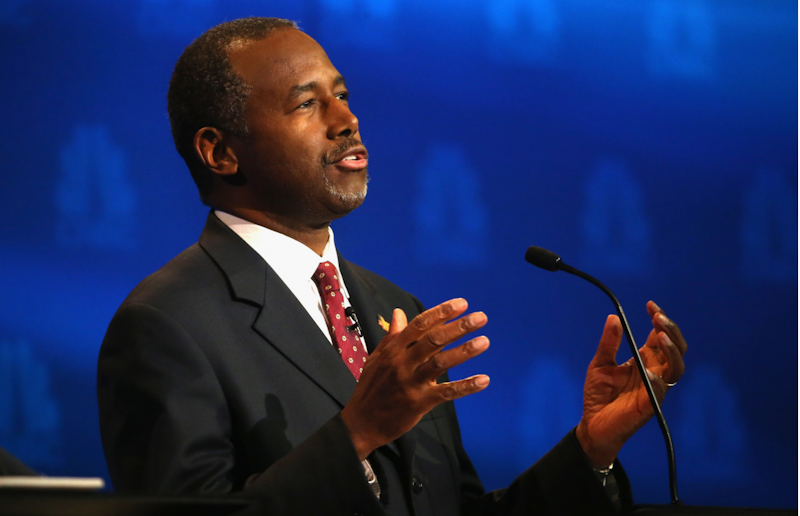 Just in time for the third Republican debate, the unstoppable Trump narrative must pause for the even stranger Ben-Carson-in-the-lead narrative, at least given the most recent major poll.

Things could be worse. This year marked the hundredth anniversary of the Ku Klux Klan-extolling film Birth of a Nation. Yet now, not only is there a black president but even the political party currently most identified with nativism and whiteness has a black man atop its polls. Should he falter, just below him in the polls are two Latinos, a guy married to a Latina, and a woman.

And even if none of them—nor the GOP’s lone, heroic libertarian candidate—rise in the polls, a Trump victory is still a victory for a thrice-married, casino-owning New York City resident, so, miserable as the left might be, they shouldn’t pretend that social conservatives are exactly throwing victory parties these days. That old tradition-and-property-rights stuff is mostly dead, as perhaps is the culture that shaped it.

As the left grows increasingly strident, zealous, and above all hypersensitive in recent years, its favorite all-purpose explanation for any lingering death-twitches from the right or libertarianism is that all those movements ever represented was a selfish clinging to the unjust ways of the past—everything that isn’t leftist being either white supremacist or pro-rape, as the venomous story goes. (A few on the right don’t even know any better and dutifully, albeit halfheartedly, take up those perverse causes.)

But until nearly yesterday—until Trump, really—there was a forward-looking, optimistic, and inclusive version of the non-leftist worldview. It was one in which individualism and markets, not identity politics and big government, would usher in a more prosperous future for all.

In fact, though it gets more difficult with each passing day to make left-liberals believe this, one of my great fears about the rise of identity politics in the 1990s was not so much that we would all be forced to bend the knee to the Thai Student Awareness Network or what have you but that eventually, after maybe a generation of this stuff, young whites—far enough removed from the sins of the pre-1964 era to feel no guilt about them and perhaps beset by an economic downturn—would start thinking, “Y’know, if identity politics is such a good thing, maybe we whites should try it in these hard times!”

And presto, where you might have had optimism and trans-ethnic markets for everyone, you’ve instead got a new, smarter but more naïve wave of virtual neo-Nazis. Or at least a few of the stranger Trump fans.

Though the left will pretend not to be able to tell the difference between us, there are even some of us voting in the Republican primaries who would heave a sigh of relief if the black guy or one of those Latinos got the nomination—even if we thought that it meant certain doom in the general election and that Trump might have won. It would be a nice last-minute save from turning the GOP irrevocably into the shrinking whites-only party, even if it meant four or eight years of battling President Hillary Clinton.

It’s a question of what it is you’re trying to conserve, and for me it’s mainly property rights and a society well-behaved enough to respect them, not any precise demographic mix. Being white and angry won’t do the nation much good if it’s broke, as I think it will be without major pro-free-market reforms.

I’m still rooting for a party of optimism, then, even if a failed Carson-or-whoever general election bid is hardly the most optimistic sketch of the future—and even though I know the angry Trump fans would call me (me, the uncompromising anarcho-capitalist who hates nearly all budget deals!) the very definition of a surrender-loving “cuckservative.” But they’re placing a short-term bet on stupid. I’m playing the long game, even as it becomes an increasingly desperate and high-stakes one.