Don't believe it? Take a look at The New York Times. 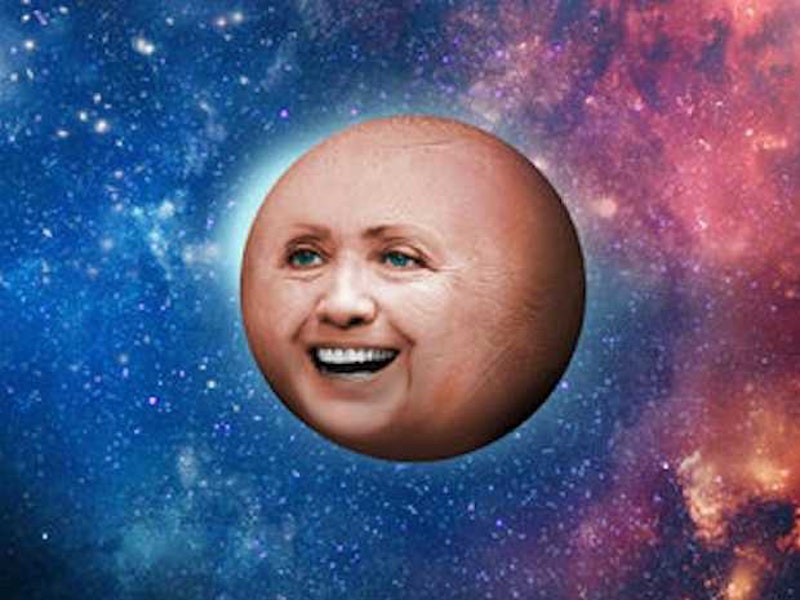 Hillary Clinton has wound up as a bald fat man on the cover of The New York Times Sunday Magazine. Ostensibly she is a planet and we are about to find out how her various aides and dependents are arranged about her in a solar system. The cover line is “Planet Hillary,” and inside we find graphics that sketch the orbits of various important people around the Great Orb Hillary. But these sketches are impressionistic. One has Bill Clinton for the inner ring and Elton John for the outer ring—hard to argue with, but hard to take seriously. The cluster that's labeled “Inner Circle” is located furthermost out from Hillary.

The article itself has little to say about the diagrams and their labels. “Potus Patrol” doesn't show up there, and neither do the names of any of the officially labeled Potus Patrol members. The motif of Hillary-as-planet seems cobbled together. In the article we're told that Clinton flunkies “have an endless litany” of metaphors to describe the Clintonista life. The one we hear about involves onions—James Carville says life around the Clintons is best, or safest, about three or four peels from the core. For its wind-up the article talks about “Hillary Clinton’s truest challenge,” her need to make people see that, “for all the layers that have been added to the onion, there’s still something at the center that’s aching for the rest to be peeled away.” Nothing about planets.

The article itself is a pile of more or less useful items about Hillary in the dugout, her downtime before the great lunge. We learn that the Clintons' age-old network of retainers is now considered a burden, and that newer aides are talking about sticking the dinosaurs with an official listener to make them feel like they matter. Various people quoted in the article say that Hillary's 2016 campaign has to be managed by young people. “Even David Plouffe is a generation removed. Who is the 32-year-old version of David?” says an operative from the John Kerry campaign. (Plouffe was born just before Sgt. Pepper came out.) Why youth? Because that's how fast technology is moving. The article, burbling, puts it this way: “Presidential politics are increasingly the province of number-crunching quants and code-breaking hackers.” The old people don't know that stuff.

Chelsea is annoying people at The Bill, Hillary & Chelsea Clinton Foundation (recently renamed) because she's important and knows it. Bill had a “surrogate son,” an aide named Doug Band, who is now a former aide because he and Chelsea didn't see eye to eye. We learn that “some longtime Clinton aides” like to call Chelsea “The Child,” and that another aide (also unnamed) “added that the handful of people who have historically called her the Child did so in an endearing way.” The staff members whom Hillary took with her to State were “called the Royal Council by one aide.” The people surrounding Bill were “referred to sardonically by Hillary’s staff members in [the] White House as 'the White Boys.'” You'll notice that many people don't get named in this article.

Meanwhile, heavyweights from the Obama team are nosing their way toward the Hillary action. “Priorities USA, the big-money group that helped get Obama elected, is situating itself as the dominant money-raiser in 2016,” the article says. Jim Messina, Obama's campaign manager from 2012, has “signed on to Priorities to turn it into a big-money behemoth devoted to a Clinton candidacy,” and so has Buffy Wicks, the woman behind Obama's get-out-the-vote operation.

Hillary herself doesn't play a big part in the article. The coda about her unknowable onion core is pro forma, an add-on. The article has to say something, so it says that. The piece comes down to this: we have somebody who is a good bet to be the next president, and there are a number of people around her whose doings can fill a few pages. That's about it.  Look at what the article takes for granted.

“She had, after all, spent four years at the State Department displaying great political and diplomatic and managerial skill,” we're told in a quick, offhand way. No word on what she accomplished, or on how her management counts as “great” after Benghazi.

Missing out on criticism, the article tries for cheekiness. It's hard, the authors confide puckishly, “not to feel an enjoy-it-while-it-lasts sort of sympathy for Clinton.” What's this about “while it lasts”? The only problem the passage mentions is the high number of people and groups trying to get Mrs. Clinton elected. But the same paragraph has the monumental “after all” about Hillary's time at State. Something has to set that off, so we get this “Uh oh, there'll be trouble” bit, like a clarinet effect on a Saturday morning cartoon show.

Combine with gossip and semi-scandal (“the sharp-elbowed business of being a Clinton soldier can scar some people”), throw in the wrap-up nod to Clinton unknowability, and you have a piece that sounds like it's about the Clintons instead of by them. But it leaves out whether Hillary Clinton has really accomplished enough to be president, and whether she can be trusted by anyone besides blood relatives and loyalist flunkies. Is she a phony? That's what the business about the unknowable Hillary comes down to. The piece showcases this theme in the first sentence: “Hillary Clinton was nodding solemnly to the mother of a 9/11 victim when Huma Abedin, standing across the room, called out, 'Let’s load!' to the staff members and bodyguards.” There's Hillary, all heartfelt contact but waiting for her aids to scoop her out of the place. The motif of Hillary-as-phony is so enduring that it gets the article's lead-off position. But then it fades from view.

People are clucking about the cover, though not the article. Feminists hate it, so do conservatives. So does everybody who wasn't properly braced before seeing the thing. The killing detail is this: Hillary has no hair. She was going to, says the magazine's design director, “but the land mass making up the hair felt forced to me. It needed to be simplified." The result is that her eyes and chin are stranded many white, blank inches from the rim of her head. Normally women have hair, only men don't; also, a round face is considered a fat face, and fat is looked down upon. And a head without a body is freakish to begin with. The country's first female president-in-waiting now looks like Jackie Gleason after an experiment. She's been man-a-fied and freak-a-fied, and it happened because nobody at the Times knew what to make of a nothing article.